NCAA seeding could be key to fixing Match Play 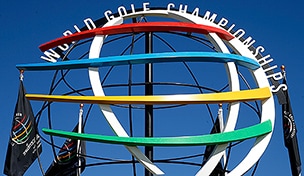 Getty Images
ATLANTA, GA - SEPTEMBER 24: Justin Rose of England (L) and Rory McIlroy of Northern Ireland walk together on the fifth hole during the first round of the TOUR Championship By Coca-Cola at East Lake Golf Club on September 24, 2015 in Atlanta, Georgia (Photo by Kevin C. Cox/Getty Images)  -

Seemingly everyone has a way to fix the Match Play.

Change the format and introduce a stroke-play qualifier.

Send it to a different venue, one that the players don’t despise.

Move the tournament to another spot on the calendar, further removed from the upcoming WGC at Doral.

Fine suggestions, all of them, but those logistical changes won’t bring more eyeballs to the event.

Here’s one that will: The Match Play should take a page from the most popular team tournament in the country and develop a new seeding process, NCAA Tournament-style.

By now you probably know how the NCAAs work: Thirty-two teams receive automatic bids for winning their conference tournaments. The other 36 schools rely on at-large bids, which are determined by a 10-person selection committee. Once the field is set, the teams are seeded based on such factors as record, strength of schedule and what they call their Ratings Percentage Index, known to hoopniks as RPI.

In golf? Well, we have the Official World Golf Ranking. That determines the top 64 available players. Those players are then seeded 1-64 based on that ranking. Then they duke it out for five days, whether it’s in Tucson or San Francisco or wherever the Match Play is headed in 2015.

Hey, the system is easy to comprehend. There’s no drama, since there is an OWGR cutoff date. There’s certainly no controversy. And the only people who truly care about the process are either the bubble boys or world-ranking gurus.

It’s a fine system … so long as you don’t care about current form.

• Jimmy Walker, who has three wins in nine starts this season, is a 6 seed.

How, exactly, is that a fair draw, an accurate representation of the best players, right now, on Feb. 18? Teams in the NCAA Tournament are seeded based on the present, with an eye on what transpired the past few months.

It might never – OK, will never – stimulate the same kind of fervent debate and produce the same monster ratings as the NCAAs, but that doesn’t mean the Match Play can’t follow the same proven process.

The suggestion here is to give the top 50 in the world an automatic spot in the Match Play field, then use a committee – the International Federation of PGA Tours, which already governs the WGC events – to determine the remaining 14 spots.

Anyone outside the top 50 is fair game – players such as Brooks Koepka and Peter Uihlein and Ryan Palmer and Charles Howell III, all of whom are watching their week’s event from the couch. Indeed, those chosen will be whomever the committee deems worthy, after taking into account current form, not the players’ position in the world order, which is based on a two-year cycle.

After the field is set, the committee would then rank the players, 1-64, taking into account such factors as record, quality of wins, world ranking, etc.

Every year, Selection Sunday and the ensuing NCAA Tournament are must-see TV events.

How are we notified about the 64-man Match Play field? With an emailed link to the latest world rankings.

Of the myriad ways to fix the Match Play, this at least has the potential for the greatest impact. Things rarely go as planned at the WGC-Accenture Match Play, where the vagaries of match play rule