One marathon day down, two more to go at U.S. Open 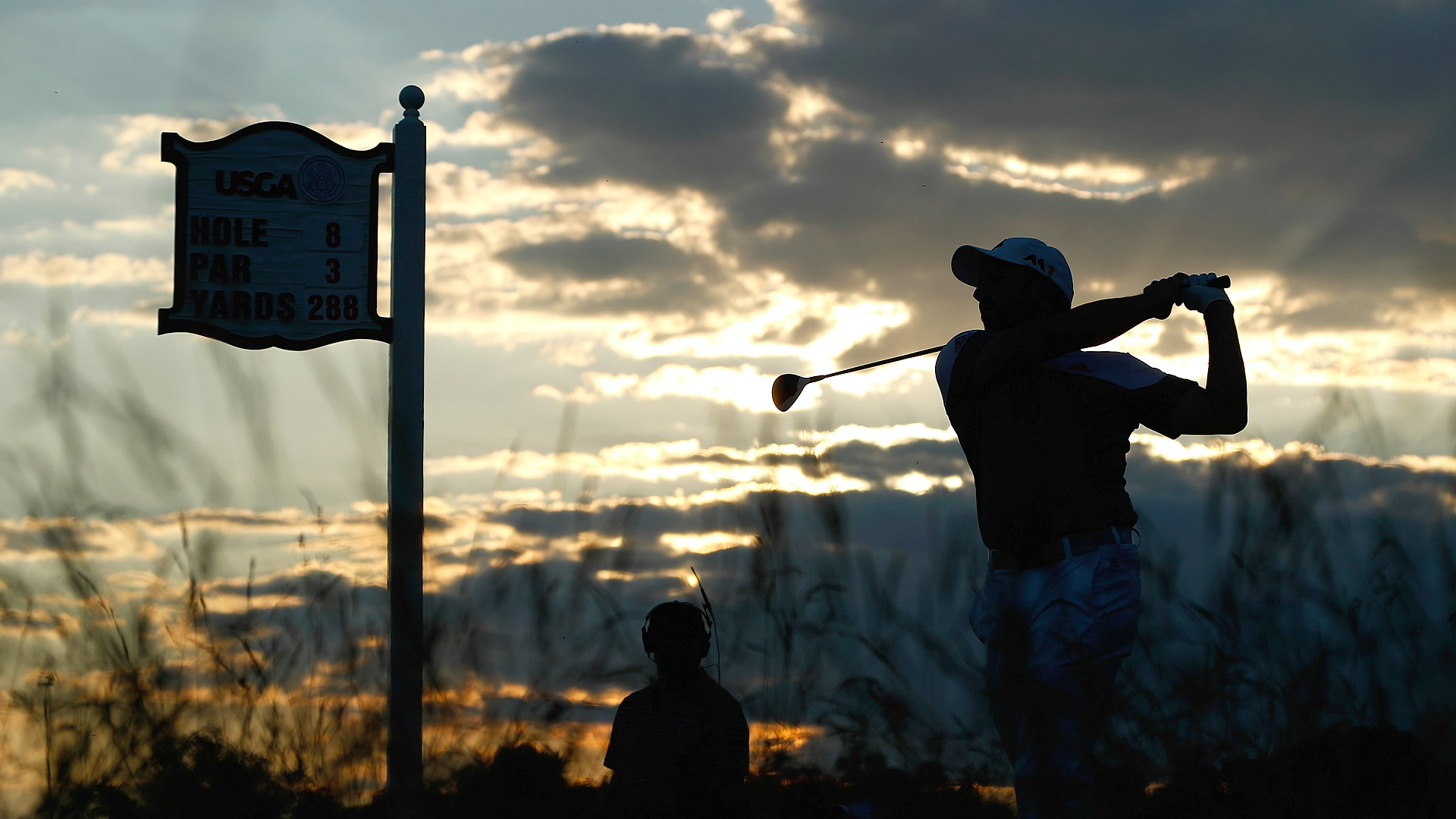 OAKMONT, Pa. – After 13 hours of nonstop golf, Andrew Landry is still atop the leaderboard at the 116th U.S. Open, even though he struck just one shot Friday. Only now he has company, with Dustin Johnson bombing his way into a share of the lead after a near-flawless display at Oakmont.

After firing the first bogey-free round in an Open here since 1994, Johnson putted for birdie on all but two holes in the second round. Opting to finish in darkness, Johnson’s stress-free 69 pushed him to 4-under 136.

“I felt like I played really good all day,” he said. “Very pleased with how it went today.”

More than a quarter of the way through this disjointed Open, the leaderboard lacks some of the familiar names – Jason Day, Jordan Spieth, Rory McIlroy and Rickie Fowler are a combined 20 over par – but it has reignited the best-player-without-a-major debate and also turned the spotlight onto a familiar protagonist.

Johnson, Sergio Garcia and Lee Westwood, with 26 top-5s in majors between them, all were inside the top four when the second round was suspended.

Their early standing should come as little surprise.

Star-crossed at golf’s biggest events, Johnson was still one of the pre-tournament favorites based not only on his recent form (consecutive top-5s on Tour), but because of a venue that so perfectly fit his brawny game. A long, straight driver enjoys a massive advantage at Oakmont, and Johnson has been lethal off the tee, finding 71 percent (20 of 28) of the fairways while leading the field in driving distance, at 318.8 yards a pop.

Westwood, now 43, shared second place two months ago at the Masters, while Garcia has regained his form, winning last month at the Nelson. The Spaniard closed out his day with a 50-footer for par on a course he described as the most difficult he’s ever played.

The rest of the picture here is less clear, with an eclectic cast of characters from major rookies to grinder-types to promising Europeans. Yet as Day 2 drew to a close, it was instructive to keep these early results in perspective: Only 47 of the 155 players have completed 36 holes, and half the field hasn’t even started its second round.

That’s why Landry, ranked 624th in the world and playing in his first major, was still at the top. Early Friday morning, he didn’t even bring his staff bag or his caddie to the course. His only task was cleaning up a 10-foot birdie putt that gave him an opening 66, the low first-round score at an Oakmont Open.

Prior to this week, Landry hadn’t been inside the top 20 after any round this season, but now he’ll sleep on the lead at his national championship for the second consecutive night. Cooped up indoors after his early finish, Landry, sporting a new, clean-shaven look, returned to the course late Friday afternoon to spend about an hour at the practice area. His second round begins at 7:11 a.m. ET Saturday.

Among those who have yet to begin their second round: two-time Masters winner Bubba Watson (1 under), defending U.S. Open champion Spieth (2 over) and world No. 3 McIlroy (7 over).

No U.S. Open is complete without a chorus of complaints, of course, and so it was Friday that some of the early-late starters groaned about their misfortune, as they endured three weather delays in one round while the other half of the field (including Johnson, the co-leader) played as many as 36 holes in a single day on a soft, gettable course.

The numbers suggest their grumblings were at least somewhat justified: The scoring average for the early-late starters (75.22) was nearly two shots higher than the afternoon wave (73.27). There were five more under-par rounds on the course when play was finally called, at 8:42 p.m. ET, after 13 consecutive hours of golf.

Oakmont’s slick, sloping greens have frightened members and Open competitors for years, but they haven’t been as fearsome over the first two days here, after nearly three inches of rain in a 36-hour span. The greens are rolling about a foot slower than the USGA hoped, allowing players to putt more aggressively. And the surfaces are soft and receptive, eliminating any fear that well-struck wedge shots would take a firm bounce and bound over the back. It’s a testament to Oakmont’s classic design – and its long, dense, penal rough – that only six players who have started two rounds remain under par.

Over the next two days, Oakmont will only get firmer, speedier and scarier, with a forecast that calls for low humidity and high temperatures in the upper-80s. (Hello, mud balls.) It’s a safe bet that Daniel Summerhays’ second-round 65 will stand as the low score of the week. One of the last players into the field as an alternate, Summerhays surged into a tie for seventh, just three shots off the clubhouse lead. “I need to think about that round, just sear it right into my memory,” he said. More importantly, he’s already signed two scorecards while the rest of the field is playing catch-up.

Indeed, another marathon day looms Saturday, with golf scheduled from sunrise to sunset. In 24 hours, the leaderboard figures to look much different.