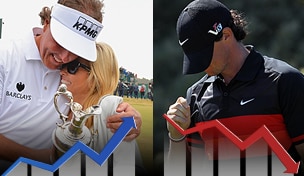 Each week on GolfChannel.com, we’ll examine which players’ stocks and trends are rising and falling in the world of golf. This week, we take a look at the 2013 PGA Tour season in general.

Hennie Stennie: Four top-3s and two wins in his last eight worldwide starts propelled Stenson back near the top of the world order. And unlike in 2009 – when he soon disappeared (once again) into the career abyss – this time the Swede looks like he’s here to stay.

Tiger: Hey, you can’t shortchange the guy’s five-win season just because of his impossibly high standards. He’s the no-brainer choice for Player of the Year, even if his 2013 is destined to be remembered as satisfying yet ultimately unfulfilling.

Jordan Spieth: Made the biggest rookie splash since Tiger in ’96, with nine top-10s, one victory, three runners-up, nearly $4 million in earnings and a spot on the Presidents Cup team. Expectations for 2014 now include a multi-win season and, possibly, a major – heady stuff for a 20-year-old.

Duf: No player’s popularity soared more in 2013 than Dufner’s. From the Dufnering craze to the ever-expanding size of his dip to the wife butt-grab after winning the PGA, his everyman appeal is unmistakable at every Tour stop.

Major breakthroughs: Adam Scott and Justin Rose traded texts, and then major titles; Phil transformed his game to win the Open; and Dufner avenged his 2011 collapse. Following this pattern, then, it would surprise little if players like Sneds, Kooch, Stennie and Hunter got off the major schneid in ’14.

Part-timers: Steve Stricker scaled back his schedule and played the best golf of his life. Mickelson already hinted that he might try a similar plan. Expect even more family-first 40-somethings to follow suit in the coming years.

Rory: It was a lost, miserable year for the former world No. 1, who not only struggled with his swing and to adjust to his new equipment, but he also mishandled his early-season schedule and displayed poor on-course comportment. He’ll return to his winning ways soon enough. We think.

Awards season: The manufactured debate is fun, but there’s no doubt which players (Woods, Spieth) should hoist the end-of-season hardware. And if Henrik Stenson – who two years ago was No. 230 in the world and now is ranked fourth – can’t bring the Comeback Player of the Year award out of retirement, then for whom, exactly, are they waiting?

Major momentum: The 2012 major winners combined to make 81 starts on the PGA Tour this season. They had zero wins and 14 top-10s – or, viewed another way, just five more than Spieth, a rookie.

Recent world No. 1s (not named Tiger): Already touched on Rory’s dismal season, but Luke Donald (swing-coach change), Lee Westwood (blown 54-hole lead at the Open) and Martin Kaymer (general mediocrity) didn’t inspire much confidence, either. Don’t forget that another erstwhile No. 1, Vijay Singh, is now toiling in anonymity on the over-50 circuit.

Rulings: Tiger was embroiled in three high-profile rules snafus this season, throwing the Tour’s call-in-from-the-couch policy under the spotlight and, more generally, prompting questions about the archaic Rules of Golf. Even more head-scratching, however, was the case of Vijay Singh, who admitted to using a banned substance, was cleared of a drug-policy infraction and then proceeded to sue the employer that cleared him.

Bitter bureaucracy: Battle lines were drawn early this season between the anchorers and the purists, and no one, not even the lawyers, emerged victorious. The USGA still shows the scars from the bluecoat bashing, and for good reason, for it tackled the belly ban instead of the issues that actually threaten our game (slow play, distance, etc.).