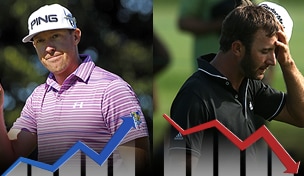 Getty Images
MELBOURNE, AUSTRALIA - NOVEMBER 10: Camilo Villegas of Columbia hits a shot off the fairway during the Pro-Am ahead of the Australian Masters at The Victoria Golf Club on November 10, 2010 in Melbourne, Australia. (Photo by Robert Cianflone/Getty Images)  -

Sneds: Just imagine how good his year could have been if he didn’t suffer an early-season rib injury. If the world’s best putter is not on your (very) short list of favorites for the PGA, you’d be wise to revise.

Fatherhood: Updated 2013 Father of the Year standings: 1.) Mahan; 2.) Stricker; 3.) Mickelson. The winner at the end of the year gets a family vacation. (Disclaimer: No FedEx Cup mathematician was harmed in the posting of this column.)

PGA: So many guys are in top form – Phil, Sneds, Scott, Kooch, Tiger, DJ – heading into the year’s fourth and final major. Which undoubtedly means we’re destined for another Shaun Micheel-type winner.

USGA: The blue coats trotted out of a glitzy list of early venues for the Four-Ball events, and the championship dates (late May) all but ensure that the college kids can’t mop up the titles. RIP, Publinx.

DJ: Is it possible that a seven-time PGA Tour winner can still underachieve? Dustin Johnson's 17th-hole meltdown in Canada was his latest missed opportunity, and you can’t help but wonder whether he’ll ever maximize his incredible talent.

Senior British: What was most memorable from the over-50 major at Birkdale: Steve Elkington’s idiotic Twitter remarks, or the steely Bernhard Langer bungling a two-shot lead? Both episodes were cringeworthy.

Slam talk: It speaks to her recent dominance that many observers have already conceded the Women’s British to Inbee Park. Can we at least play 72 holes, crown a winner, and then debate what kind of Slam it is?

Web.com Tour: This season there have been 20 rounds of 62 or better, including a pair of 59s. Last week, 23 under was good enough for only a playoff, and 65 players were double digits under par. It’s time to toughen up the Wedge.com Tour.