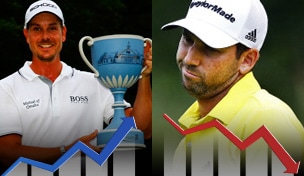 Getty Images
CASARES, SPAIN - MAY 17: Miguel Angel Jimenez of Spain poses for a picture ahead of the welcome dinner for the Volvo World Match Play Championship at Finca Cortesin on May 17, 2011 in Casares, Spain. (Photo by Warren Little/Getty Images)  -

Hennie Stennie: The dude was due: Five top 3s in his last six worldwide starts, second on Tour in ball-striking, fourth in total driving, fifth in scoring average. That miserable slump of 2010-11 is a distant memory.

Spieth: Arguably the story of the year in golf: This 20-year-old went from having no status anywhere to a win, two runners-up, eight top 10s, a spot in the Tour Championship and – what should be, at least – a no-brainer pick for the Presidents Cup.

Web.com Tour Finals: Already a believer in the new end-of-season series that promotes 25 players to the 2013-14 Tour. The romanticism and drama are largely gone, but a better crop of graduates will emerge after four weeks, not five days.

Peter Uihlein: Was denied his second Euro Tour win only after Gregory Bourdy closed birdie-birdie-birdie at Celtic Manor. Enough globetrotting – would love to see how the 24-year-old Uihlein would fare now on the big tour.

Sergio: How to squander a two-shot lead and sink to 3-for-11 as a PGA Tour closer: bogey both par 5s and the drivable par 4 on the opening nine. Storm clouds may have passed through Norton, Mass., on Monday, but they’re forever hovering over Garcia’s head.

Yani: Poised to end a 36-event winless drought, the former world No. 1 self-immolated during a final-round 78 that left little doubt that her main obstacle is between her ears.

Presidents Cup: The annual wild-card wrangling is underway, but let’s face it: All signs point to another U.S. landslide at Muirfield Village. The Americans have seven players ranked in the top 12 in the world; the Internationals have just one (Adam Scott). Heck, even the Americans’ B squad might be a slight favorite.

Math: Fans “want to be challenged to keep up with the permutations” of the FedEx Cup (or so the Commish argued last year), but we’re having a little trouble understanding how Spieth tied for fourth at TPC Boston but still dropped from No. 9 to No. 10 in points.