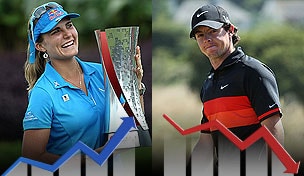 Getty Images
BALTRAY, IRELAND - MAY 17: Johan Edfors of Sweden poses with a bottle of pink champagne after winning the award for being the best dressed on Pink Friday prior to the start of the final round of The 3 Irish Open at County Louth Golf Club on May 17, 2009 in Baltray, Ireland. (Photo by Andrew Redington/Getty Images)  -

Lexi: The 18-year-old possesses game-changing talent, especially if she can develop any semblance of consistency on the greens. Her second big-time victory furthers the belief that there will soon be a new Big 3 in women's golf: Lexi, Lydia and Charley, of course.

Jimmy Walker: Nice player and an expected breakthrough candidate, for each year he has gotten progressively better (since 2009, he has improved from 125th to 103rd to 67th to 48th to 30th on the money list). Whether he should have received a Masters invite for beating three top-50 players at the Frys is another matter.

Brooks Koepka: His four-shot lead disappeared in a hurry Sunday, but the former Florida State All-American, who has stamped his passport in 15 different countries this year, showed his game is plenty good enough for the big tour Stateside, too.

David Lynn: Oh, there was nothing lighthearted about what golf’s resident prankster accomplished in Portugal: a closing, nine-birdie 63 to capture his first European Tour title in nine years. Alas, he didn’t celebrate by planking.

Vijay: Instead of chasing easy money on the over-50 circuit, the immensely proud Fijian continues to battle players half his age – with the deer-antler lawsuit overshadowing his every start – in pursuit of his first title in five years. Respect.

Rory: Poor form. Breakup rumors. Messy legal battle. If he weren’t so fabulously wealthy, yeah, you could say McIlroy was having a bad 2013.

C-List events: This week’s stop in Vegas has a slightly better field (six top-50 players, including No. 11 Zach Johnson), but the Tour’s start to the new season has provided about as much sizzle as a spring-training game.

Hall of Fame: Its best decision in years was putting the kibosh on the ceremony until it can reasonably determine which players are worthy of induction. Because lately, it has become the Hall of Very Good.

Playing privileges: The PGA Tour welcomed the 50 players who earned their cards via the Web.com circuit by forcing 20 of them to play in a Monday qualifier for this week’s event in Vegas. Seems those Tour cards can make nice coasters, as well.