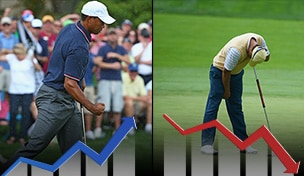 Match-play Tiger: You can’t say he wasn’t into it last week – handshakes, clutch putts, butt slaps, chasing after fairway-wood shots, gritting through the lingering back injury. With a 4-1 record, he was the undisputed Man of the Match. Good thing Sammy the squirrel didn’t gnaw a hole through his neck on Thursday.

Jason Dufner: Teamed with Zach Johnson to form one of the most formidable American duos, and then he thumped birdie-machine Brendon De Jonge in singles to go 3-1 for the week. When properly motivated, Duf is as good as any in match play.

J-Day: He was one of the few bright spots for the Internationals, posting a 3-1 record. Of course, his dynamic play served as another reminder that, somehow, the uber-talented Aussie has only one Tour title to his credit.

Graham DeLaet: One of the year’s breakout stars, the Canadian also showed his match-play chops with a 3-1 record, including a pair of Sunday hole-outs on 18 to clinch his matches. His maiden Tour victory is coming in 2013-14. Bank on it.

Freddie: Captain Cool extended his perfect record to 3-0 and then promptly retired. Maybe he, too, is bored with winning so handily.

Presidents Cup: The exhibition drifted into further irrelevance with the Yanks’ third consecutive blowout, fifth consecutive victory and eighth win in 10 tries. Is it too early to dread the ’15 edition in Korea?

Captains: With the rout already on, neither Nick Price nor Couples gave the fans and viewers what they wanted, which was pretty much Tiger vs. Anyone But Richard Sterne. The back-and-forth selection of pairings is a great idea, but it’s worthwhile only if it produces compelling matchups. This time, it was a big whiff.

Stacy Lewis: Clipped by Shanshan Feng’s eagle in China, the fiery American vented on Twitter about the disrespectful fans and smog-affected LPGA tourney, then decided to delete the offending tweets and announce a self-imposed hiatus, ostensibly because of the backlash. Too bad – it was refreshing candor from a star player.

Visiting duds: Neither Brandon Grace nor Sterne put up a point for the Internationals, Ernie Els’ putting stroke was cringe-worthy, and you couldn’t help but wonder whether Angel Cabrera, 44, would be able to play his way onto another squad. If we’re lucky, the format and selection process will be drastically different in two years.