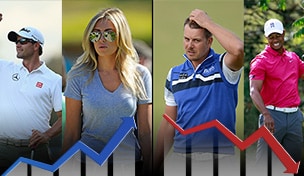 Getty Images
Bubba Watson watches his tee shot on the sixth hole during the first round of the Northwestern Mutual World Challenge at Sherwood Country Club on December 5, 2013 in Thousand Oaks, California. (Photo by Stephen Dunn/Getty Images)
-

Victor Dubuisson (+8%): Raise your hand if you had ever heard of the 23-year-old Frenchman before last week … OK, quit lying. He may not be destined for stardom after the Turkey victory, but any time a dude holds off Tiger, Hennie Stennie, Rosey and Poults, it’s worth noting, no?

Adam Scott (+7%): His dream season got even better with the big win at the Australian PGA. If his swing weren’t so pure, you’d swear he was doomed for an emotional letdown in ’14.

Walker Cup (+6%): In a dozen-year span (2009-2021), the biennial event will have been played at such venerable tracks as Merion, National, Royal Lytham, L.A. Country Club and now Seminole. What a treat for the world’s best amateurs.

Paulina Gretzky: (+5%): Maxim cover girl > HSBC win. Sadly, we’re entering an alternate universe in which the WAGs are more popular than the golfers.

Justin Rose (+4%): The U.S. Open champ peaking during the Euro Tour’s finishing kick, posting back-to-back top-5 finishes. It’s enough to convince this scribe that he’s the man to beat this week in Dubai.

Wrist injuries (-2%): Henrik Stenson is unsure whether he’s doing massive damage by continuing to play, while Tiger (narrowly) escaped disaster when he hit a tree on his follow-through in Turkey.

Briny Baird (-4%): The winless drought is now 365 and counting. Yes, he may have secured his card for the rest of the season, but this latest disappointment – and the ugly, 90-yard top from the fairway bunker – will linger for years. Good thing he has more than $13 million (!) in career earnings.

King Louie (-6%): After a T-67 in Turkey, Oosthuizen revealed that he is scheduled for another minor procedure on his ailing back. Discouraging news for one of the game’s sweetest swingers.

Final Series (-8%): Ernie says the must-play-two policy is an “absolute joke.” Charl says he is considering leaving the Euro circuit. Monty says the tour should call the players’ bluff. Hey, if nothing else, all this dysfunction makes the FedEx Cup look like a perfect system.