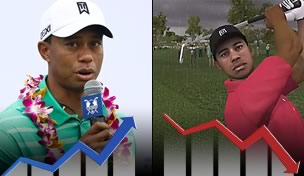 Each week on GolfChannel.com, we’ll examine which stocks and trends are rising and falling in the world of golf.

Suzann Pettersen (+10%): Playing as if possessed, the LPGA’s most enigmatic star hasn’t finished worse than seventh since late June. Now, her third win in her last five events has her closing in on Player of the Year and the No. 1 ranking. Which is exactly the kind of perch a woman of her immense talent rightfully deserves.

Ryan Moore (+4%): Nice player, streaky talent, and maybe this is finally the season in which he cashes in on all of that awesome potential he displayed as an amateur.

Money grabs (+2%): For the entertainment value? Puh-leeze. But it’s hard to fault Tiger and Rory for playing in these glorified hit-and-giggles – for about four hours of work, each reportedly pocketed at least $1.5 mil. Hey, you’d play, too.

Open qualifiers (-2%): There is a better (and more fair) system for gaining entry into the British Open, ending what little romanticism there was left at the elite level. Well, unless you count DJ and Paulina.

Guan Tianlang (-4%): A T-8 at the Asia-Pacific Am means the 15-year-old won’t book a return trip to Augusta, which, you know, will just give him more time to catch up on his schoolwork.

Inbee Park (-6%): Remember when Park was vying for the Grand Slam or, better yet, the marketing department’s Super Slam? Now, her historic LPGA season – which has been derailed by just one top-10 in her last eight starts – might not even be good enough for Player of the Year honors or the No. 1 ranking. Brutal.

Simon Dyson (-8%): Intentional or not, his infraction at the BMW Masters was one of the most egregious you’ll ever see, and his penalty was three-fold: the DQ knocked him out of the tournament, where he was contending; he ticked off his peers, many of whom now believe he’s a no-good cheat; and he faces potential disciplinary action from the Euro Tour. So, other than that, ’twas a quiet week.