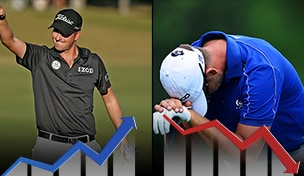 Getty Images
Graham DeLaet of Canada and the International Team celebrates after making a birdie on the 18th hole during the Day Four Singles Matches at the Muirfield Village Golf Club on October 6, 2013 in Dublin, Ohio. (Photo by Matt Sullivan/Getty Images)  -

Each week on GolfChannel.com, we’ll examine which stocks and trends are rising and falling in the world of golf.

Webb (+10%): Think about this: Only DJ (seven) and Rory (six) have more PGA Tour wins in their 20s than the perennially underrated Simpson (four), who emerged from his post-Open doldrums with an emphatic six-shot win in Vegas.

Alabama men’s golf (+8%): Last year’s NCAA champs lost a former Player of the Year to the pro ranks (Justin Thomas) but added a future first-team All-American in freshman Robby Shelton and boast a late-blooming stud in Trey Mullinax. Now 3-for-3 in the fall, including a wire-to-wire win at Isleworth, the Tide are equipped to make a deep run at back-to-back national titles.

Nick Price (+6%): Earlier this month he sidestepped questions about the unfair Presidents Cup format, because he didn’t want to seem like a sore loser. Now, a few weeks after yet another International loss, he continues to push for change and said he likely wouldn’t accept another captaincy unless something is done to make the matches more competitive. Good for him.

Ryo (+5%): The kid has received his fair share of handouts over the years, but Ishikawa not only went back to the Web.com Tour Finals to regain his card, but now he seems to have thrived off the experience, parlaying that into a T-2 in Vegas and displaying the kind of promise that made him a can’t-miss prospect.

Rory (+2%): The backdoor T-2 in Korea was encouraging for two reasons: He repeatedly fought back after seemingly shooting himself out of contention and it was his best finish, anywhere, since early April.

Melodramas (-2%): Rory and G-Mac are grouped in the Euro Tour’s playoff opener – a move they likely signed off on – offering still more proof that there’s no bad blood between them after the management change, wedding absence, insert-latest-drama-here.

Hyung-tae Kim (-6%): So, to recap, he unknowingly committed a violation; staged a two-hour protest; had three members of the Korean golf committee agree that there should be no penalty but was nonetheless pencil-whipped; and then lost the tournament. Oy.

Hennie Stennie (-8%): An injury never comes at a good time, but Stenson’s bum right wrist/forearm is particularly unfortunate in that it threatens to end his historic bid for two end-of-season crowns.