Upbeat Woods a sight for sore eyes at Bluejack 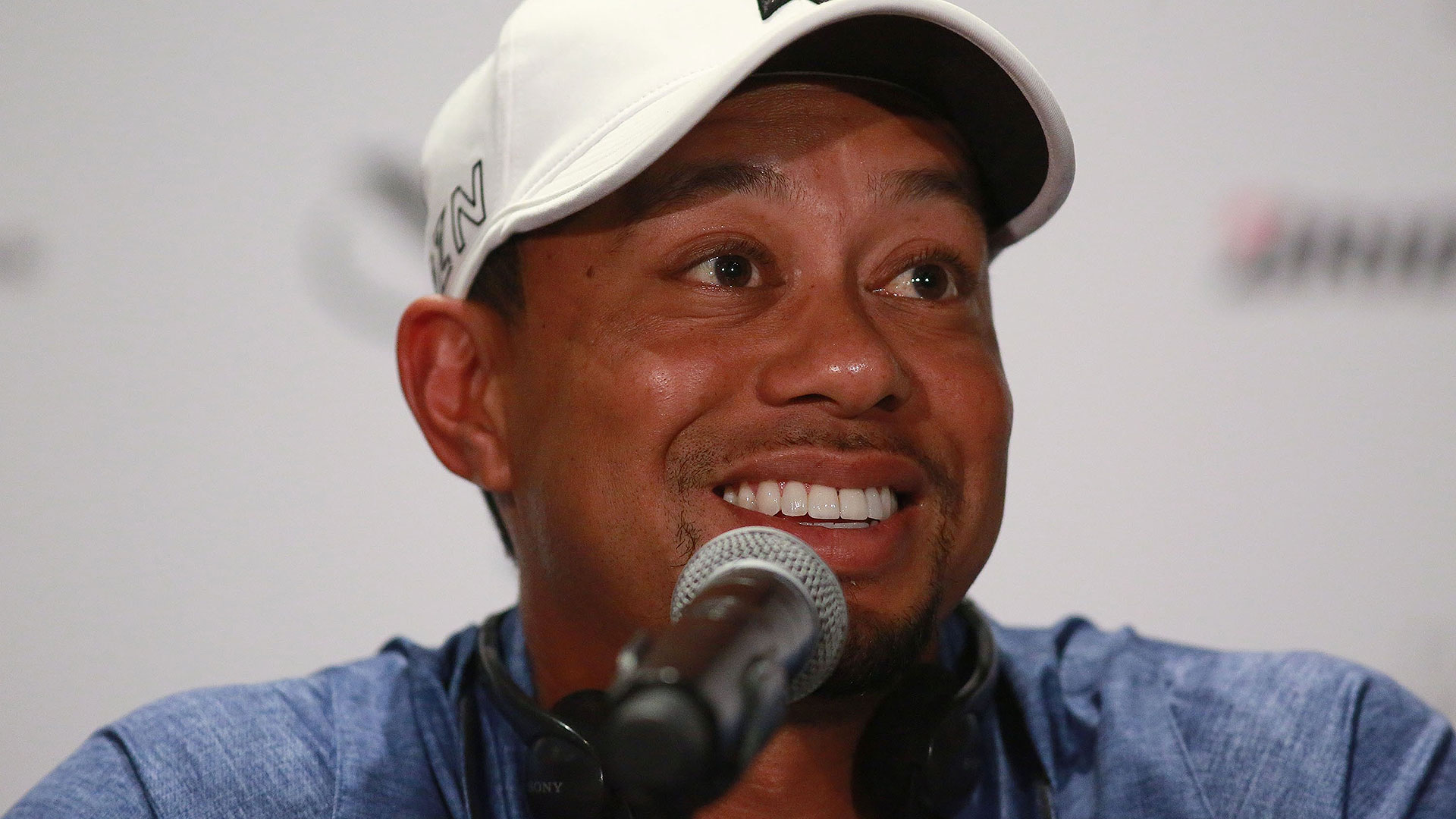 MONTGOMERY, Texas – Based on recent reports, you half expected to see Tiger Woods require a cane, wheelchair or gurney here at Bluejack National during his first public appearance in three months.

Quite the opposite, in fact.

With a row of cameras eagerly awaiting his arrival onto the back patio of Blake Cottage, Woods bounded up the wooden steps with a smile, shook a few hands and sat comfortably in a director’s chair for the next 40 minutes.

Speaking publicly for the first time since his World Challenge event in December, Woods made it clear Wednesday that he is making progress.

He is playing catch with his kids.

He is chipping and putting in the backyard with son Charlie.

He is hitting soft 9-iron shots.

He is working out and getting stronger, though he still has a long way to go.

But the big question – the ONLY question – is when Woods will return to competition. It went unanswered.

Sorry, but he still hasn’t even the slightest idea.

Wearing a charcoal vest, pink polo and gray slacks, Woods looked fit and healthy, his upper body as chiseled as ever. If he felt any discomfort sitting for 40 minutes, he didn’t show any signs. Before the news conference, Tiger toured Bluejack National, his first domestic design that immediately recalls Augusta, while riding shotgun in a golf cart with plush white seats emblazoned with the course logo. Following his interview session with about a dozen reporters, Woods held a private, members-only tour of The Place, a Nike Golf Performance Center, and The Playgrounds, a lighted, 10-hole short course designed for families.

Woods’ news conference was decidedly more upbeat and optimistic than his most recent gathering with the media, in December, when he painted a grim picture about his recovery, saying there was “nothing I can look forward to,” that any other achievements in his career will be “gravy” and that he couldn’t see the light at the end of the tunnel with his recovery.

“It’s a heck of a lot better than then,” he said. “I wasn’t feeling very good and you could see it all over me.”

Perhaps in an attempt to curb many of the health-related inquiries, Woods preempted the news conference by releasing a brief update on his website detailing his ongoing rehabilitation. Answering questions Wednesday, Woods reiterated that he’s only been able to hit 9-irons, nothing more, and has yet to even play a nine-hole round.

Of the rumors on social media that he had suffered a setback, needed to sit fully reclined in a car and couldn’t climb stairs, Woods tilted his head back and laughed.

“Welcome to my life,” he said.

Woods hasn’t played since the Wyndham Championship on Aug. 23, which was, ironically, his best performance of a dismal year. Despite being bothered by what he thought was a sore hip, he trailed by only two shots heading into the final round and eventually tied for 10th.

Woods underwent a microdiscectomy on Sept. 16, his second back surgery in the span of about 18 months, and announced about a month later that he needed another undisclosed procedure to relieve discomfort.

This recovery, Woods cautioned, isn’t as straightforward as, say, reconstructive knee surgery, which usually follows a nine-month timetable. “Dealing with nerves,” he said, “there is no timetable. Everyone heals differently and every nerve is slightly different.”

And so he waits, for baby steps and benchmarks. He waits until he can chase after his kids. Until he can increase his hours in the weight room. Until he can work through every club in the bag. Then, and only then, can the thought of a Tour return even come into focus.

“I’ve played through a lot of injuries,” he said. “I’ve cost myself other tournaments by pushing through that, I’ve cost myself months and years because of it. But that’s what athletes do. They play through pain and deal with injuries. It’s part of playing sports.

“Has it cost me? Yeah, it has. But that’s what athletes do. They’re always pushing the envelope to compete at the highest level.”

But now Woods seems content to wait until he’s fully healthy, or as close as a 40-year-old with four knee surgeries and now three back procedures can get. He knows the consequences of pushing too hard, of rushing back from injury – he just lived through it for the past few months, when he was a depressed bystander watching his kids play.

“The only thing I do know,” he said, “is that I’m progressing, I’m getting better, I’m getting stronger, and I just have to take it day by day. It’s changed dramatically. I have to keep that momentum going and hopefully continue doing that and eventually get out here, hopefully sooner rather than later.”

The local cameramen were long gone by the time Woods ambled over to the 81-yard first hole at The Playgrounds for the official opening of his short course.

The second player on the tee was 11-year-old Taylor Crozier, who took a swipe with an iron as Woods watched nearby. Crozier’s ball hopped along the bumps and mounds and dropped for a hole-in-one. The crowd exploded.

Woods yelled and threw up his arms, swallowing the kid in a bear hug. "Inaugural shot," Woods said, "and he holes it!"

Once he realized that he needed to follow up the ace, Woods put his hands on his white cap and schlepped over to the tee.

Using a putter, he took a big swing and nearly holed the damn thing. When his ball took a peek at the cup and rolled past, Woods whirled around and smiled. Yes, he’s on the mend.