BRADENTON, Fla. – Parity and an unpredictable match-play format can make for a tumultuous championship.

We saw it seven days ago, when Stanford and Baylor knocked off the favorites and reached the NCAA women’s finals.

And that’s what we have again here at Concession, where over the course of 12 hours Tuesday, Southern Cal defeated Texas and Illinois – the popular choices to win it all with a combined 15 wins this season – to advance to the NCAA Championship final.

The 13th-ranked Trojans will face No. 9 LSU in the 18-hole championship match Wednesday.

Pressed for an explanation on how we arrived here, USC coach Chris Zambri offered: “Our championship is just incredibly difficult to win.”

Hey, no one understands that better than the top seeds.

Since match play was instituted in 2009, the team that won the stroke-play portion has yet to win the national title. Illinois was merely the latest match-play casualty.

In one day, the Illini experienced the wild swings of momentum that can make match play so maddening.

In the quarterfinals against UCLA, they enjoyed big-time performances from Thomas Detry (won Nos. 15-17), Charlie Danielson (won seven holes in a row) and Nick Hardy, whose pars on the final two holes were enough to secure a 3-2 win.

In the semifinals against USC, they looked tired, hit poor shots at inopportune times and failed to make a sustained rally.

No doubt the most clutch shots were struck by senior Eric Sugimoto, a transfer from Pacific, the team’s No. 5 man and a player with only one top-10 this season. His hybrid shot to 5 feet on 14, his two-putt from 40 feet on 15, his iron shot to 10 feet on 16, and then his amped-up 3-wood from 249 yards on 17 to close out the match were some of the best all week, given the circumstances.

Zambri joked that Sugimoto was the kind of player who showed signs “four out of the seven days a week” – or, in other words, during practice.

“But we’d known he had it all along,” said USC assistant Tyler Goulding, who walked alongside Sugimoto in the semifinals. “We knew he had those kinds of stones to hit shots when they really mattered.”

The Trojans’ appearance in the finals here will only fuel the debate as to whether the NCAA has found the right format.

There’s little argument that the system worked in 2012 and ’14, when the top two teams in the country squared off, but there have been a few oddball showdowns that took some star power out of the event a day early.

What can be done?

It may not have mattered this week, but instead of seeding based on the four rounds of stroke play, the teams should be slotted in the bracket based on their rank entering nationals. In no other sport can the top two teams face off in anything other than the finals. So why is college golf different?

Another issue to consider: The last two weeks, on both the men’s and women’s side, coaches and players have cited fatigue. Yes, the national championship should be the most grueling test of the year, but at this point, with eight rounds in seven days, it’s almost as much about endurance as it is skill. When asked what he was going to tell his team on the eve of the NCAA finals, LSU coach Chuck Winstead replied: “Go to sleep.”

All of this isn’t to diminish the accomplishments of two richly deserving finalists.

The Trojans are coming off a last-place finish at the 2014 NCAAs at Prairie Dunes, a course that didn’t fit the team’s aggressive style of play. Zambri joked that so many of his players’ shots found the bushes, they needed a Sherpa.

Reminders of that debacle are in Zambri’s office back in LA. Tournament officials sent him a giant poster with his team’s scores, but he rolled it up and put it behind his desk, never to be seen again. A smaller version is tacked on his cabinet. Motivation.

USC won three titles this season, but none since late February. In three of the Trojans’ toughest tournaments this spring, they finished ninth, eighth and seventh.

When asked if he ever envisioned that his team would be staring at the possibility of going from worst to first, Zambri shrugged.

The Trojans are essentially a team that caught fire at the right time and capitalized on the capricious nature of 18-hole match play.

“They deserved to win,” Small said.

The LSU Tigers, meanwhile, are a confident – cocky? – bunch with five solid players and a coach who has guided the program through lean times.

After losing in the 2014 semifinals, LSU almost didn’t even make NCAAs, after it trailed by 14 shots on the final day of regionals. Clutch performances by Brandon Pierce and Ben Taylor – the latter of whom delivered the clinching point Tuesday against Georgia – punched the Tigers’ ticket to nationals.

Tuesday was relatively low stress, as they beat Vanderbilt and Georgia by 3-1-1 margins.

Said LSU’s Zach Wright, who improved to 4-0 in match play in two NCAA appearances: “We’re a team that doesn’t really have any weaknesses.”

Since the match-play era began, there has always been a dominant team, whether it was Oklahoma State or Texas or Alabama.

Parity reigned this year, as seven teams won five or more times. It’s revealing, though, that four of those teams didn’t even make match play, two lost in the quarterfinals and the other, Illinois, which won an NCAA-best eight times, fell one match shy of reaching the finals.

The same scenario played out on the women’s side a week earlier – favorites USC and Duke bowed out early, clearing the way for a pair of top-20 programs to fight for the title.

Yes, by now we’ve learned these NCAAs are a tumultuous championship. But that doesn’t make it any less surprising. 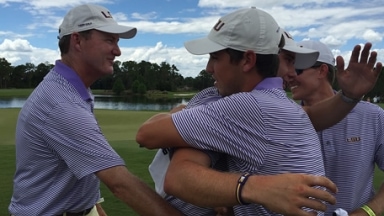 LSU cruised to a 4-1 victory over USC to win the men's national championship. Here are the key numbers from the final day at Concession Golf Club provided by the Golf Channel editorial research unit.

USC coach Chris Zambri can't explain why his school hasn't won a national title, but that could all change on Wednesday. 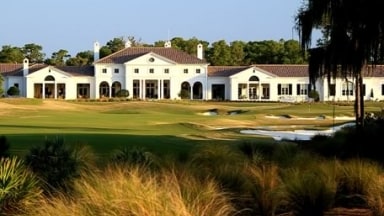 Here are the key numbers from the semifinals provided by the Golf Channel editorial research unit.