Questions about the state of his game heading into the year’s first major morphed into serious doubts about his short- and long-term health Sunday after the world No. 1 withdrew after 13 poorly played holes at the Honda Classic.

There were signs of trouble early and often at PGA National. Even before teeing off in the final round Woods was stretching and twisting his lower back. Afterward, in a statement, he confirmed that the injury had caused him discomfort since his warm-up on the range.

Then, after walking off the ninth green, he stopped and talked for about 15 seconds with girlfriend Lindsey Vonn, who had slipped inside the ropes. It was an unusual exchange in the middle of a round, and in hindsight it’s reasonable to assume they were discussing his health and a possible exit strategy.

About an hour later, Vonn was seen hobbling through the parking lot with Woods’ 5-year-old son Charlie. Soon after, and with the media waiting nearby, Woods was dropped off in a white van. He chatted briefly with his spokesman, Glenn Greenspan, before slowly heading toward the passenger seat of a black Mercedes SUV.

Oh, just a reminder: The Masters is only 39 days away.

Back spasms was the official reason for his withdrawal. The severity of the injury is unknown – in a statement Woods said that it’s similar to what he experienced at the Barclays last fall, when he fell to his knees after hitting a shot – and it’s unlikely he would fully divulge that information even if he did return to action next week at Doral.

What we do know is this: This is Woods’ seventh career withdrawal, and his fourth in the past five years. That he has pulled out for four different ailments – knee, Achilles, neck and now back – only casts further doubt as to whether he will ever again be able to play an injury-free season.

If nothing else, Sunday served as a stark reminder that it is Woods’ brittle body – not his mind or game – that stands as his main obstacle to Jack Nicklaus’ record of 18 majors.

This marks the first time in Woods’ career that he has failed to record at least one top-10 finish in his first three starts of a season. His previous worst opening stretch was 2011, and that eventually turned into a lost year, after missing three months (and two majors) with injuries to his knees and Achilles’ tendon.

Now, Woods is rusty, injured and seemingly disinterested at times. He clearly eased into the year because of a late-2013 injury and can’t chisel off the rust or, more importantly, return to 100-percent health.

To recap, he missed the 54-hole cut at Torrey Pines, where he had won eight times as a pro. Then came the listless T-41 in Dubai, where he was a two-time winner.

And now, after an efficient Saturday 65 that prompted many to proclaim that all is right with the world No. 1, he was 5 over par (and back to even for the tournament) when he walked off after 13 holes.

Prior to withdrawing, he was missing fairways with irons. He was flubbing pitches around the green. He was fighting a two-way miss with the driver – on the par-5 third, he blasted one 40 yards right into the pond; three holes later, he sniped one left into the drink.

Luke Guthrie, who was paired with Woods during both weekend rounds, noticed that Woods began gingerly teeing up the ball and plucking it out of the cup on the 11th hole. Soon after, Woods made a short par putt on 13, walked up to Guthrie and said, “I can’t go anymore,” and headed toward the white van.

“If you’re hurting, you’re hurting,” Guthrie said afterward. “You don’t need to risk injuring yourself even more. He’s had his share of problems with injuries. There’s no reason for him to chance it if he’s really hurting.”

Much like in 2012, when Woods withdrew from Doral only to return two weeks later and win at Bay Hill, this injury is even more significant because of the timing.

Here’s a trivia question: How many times has Woods won the Masters without a victory earlier in the season?

It’s why his next two scheduled starts, at Doral and Bay Hill, take on even greater importance – assuming, of course, that he can even make it to the first tee Thursday. “It’s too early to tell,” he said in a statement.

At this point, any outcome is possible. 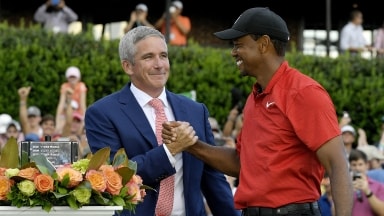