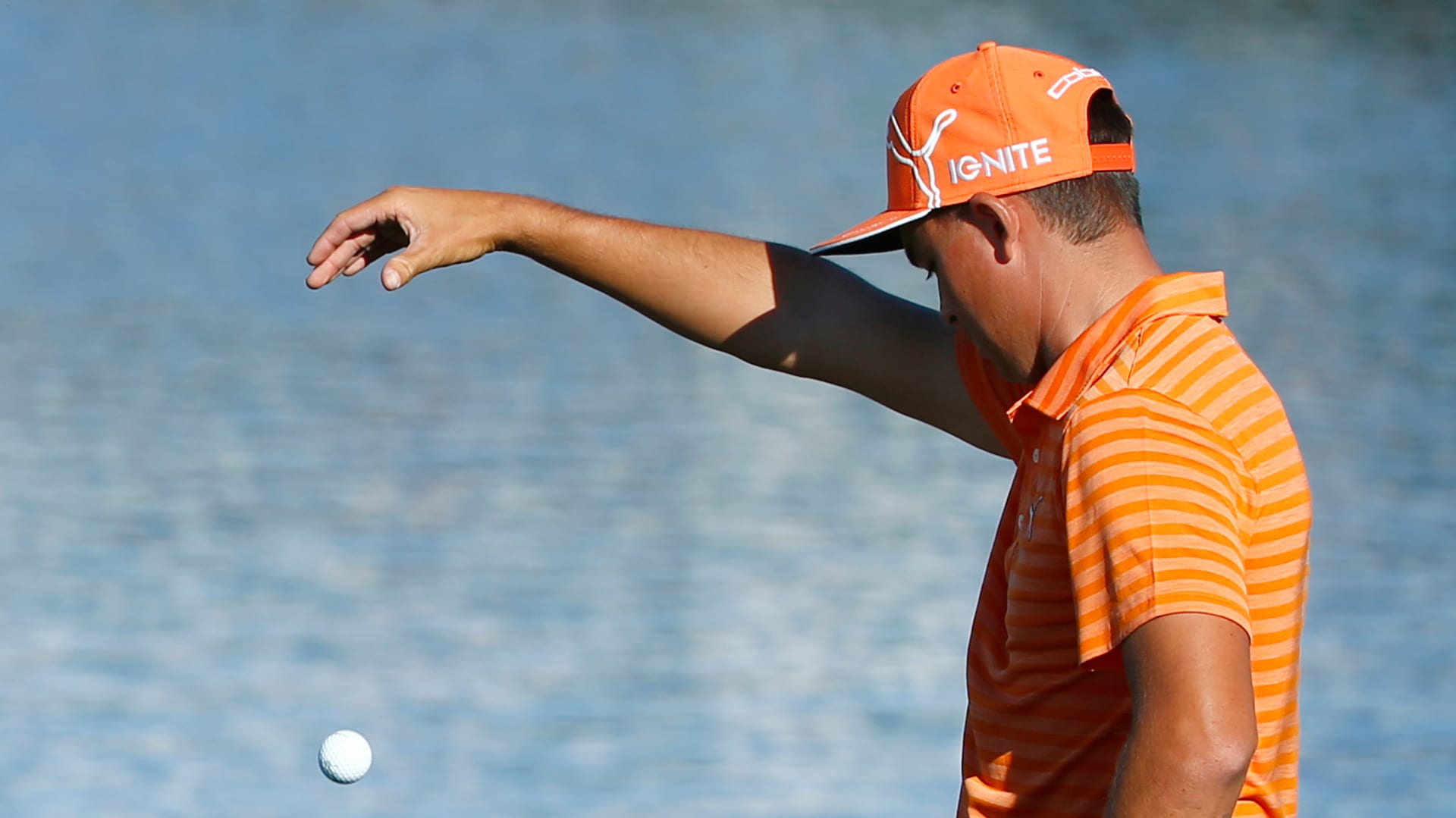 SCOTTSDALE, Ariz. - Rickie Fowler had a lot more riding on the Waste Management Phoenix Open than anyone knew.

Even before he took questions from the media, it was clear his playoff loss Sunday to Hideki Matsuyama hurt - a lot.

His voice cracked with each answer as he recalled how he found the water twice on the short par-4 17th - once in regulation and then again on the fourth playoff hole - and how he came so close to winning his fifth title in nine months.

But it wasn’t club selection or missed putts that caused Fowler to break down in tears. When asked how he was going to get over his second-career playoff loss, Fowler could barely get the answer out.

“The hard part is having, you know, all my friends and family and grandpa and my dad who haven't seen me win,” Fowler said. “But I will be able to kinda hang with them tonight. I'll be all right. With how good I'm playing, I know I can win. That's the hard part.”

And that’s when Fowler had to walk out.

For most of the back nine, it looked like Fowler was heading to a coronation. The rowdy fans in the amphitheater at the par-3 16th were ready to hand him the trophy when Fowler stuck his tee shot to 8 feet, 9 inches.

Then came the hole that would define this tournament. Fowler first selected 3-wood off the tee at the 317-yard, par-4 17th. But he put it back in the bag for the driver. Fowler smoked his driver down the stretch on the par-4 14th and the par-5 15th. This one was no different.

Except this time his ball hit the downslope in front of the green and rolled all the way through into the water behind the hole.

“I hit it right on line, hit it exactly where I was looking,” Fowler said. “That's kind of the unfortunate part to hit the shots that I did and to pull them off, and then it kind of backfired there. Hit a perfect shot.”

Standing on the tee with Fowler, Matsuyama was just as surprised.

“He hit a perfect drive in regulation at 17,” Matsuyama said through his translator. “I'm surprised it went into the water. It was a great shot.”

It was the opening Matsuyama needed. Seeing what Fowler did, Matsuyama drilled a 3-wood to the front of the green and got up and down for birdie. Fowler bogeyed, and they went to the 18th all square.

That’s when things got real.

After both players boomed their drives more than 325 yards on 18, Matsuyama dropped his approach to 17 feet, and Fowler responded by sticking his to 9 feet.

Again, the fans packed around the 18th green chanted Fowler’s name, thinking this would be it. He’d finally close out Matsuyama, they would go nuts, and everyone would race home in time for the Super Bowl kickoff.

That’s when Matsuyama drained his birdie putt and stunned the pro-Fowler audience. The 23-year-old Japanese star estimated the crowd was “99 percent” behind Fowler in the final round.

“That gave me the motivation to go out and do it and win,” he said.

When the putt fell in, the normally stoic Matsuyama pumped his fist.

“The putt I made there was probably the best putt I have ever made in my life,” he said.

Fowler got the crowd back on its feet when he matched Matsuyama’s birdie to send it into overtime. They exchanged pars on the first playoff hole, birdies on the second, and pars on the third.

The two young stars played 18 twice, followed by the par-4 10th, and then Fowler and Matsuyama returned to the scene where everything changed in regulation, the drivable 17th.

This time Fowler chose the right club (3-wood) and made a bad swing, about an hour after he had picked the wrong club and made a great swing.

His tee shot found the water left of the green, and Fowler couldn’t get up-and-down for par to put pressure on Matsuyama.

With the win, Matsuyama is expected to move to 12th in the world. He joined Jordan Spieth as the only players under age 25 with multiple PGA Tour wins. Matsuyama won his first title at the 2014 Memorial Tournament, and now that he captured his second, he admitted he will have re-valuate his goals for the year.

“I'm going to go home tonight and rethink the next goal,” he said.

As crushing a defeat as it was for Fowler, he will no doubt try to take away some positives after nearly winning for the second time so early in the season. One positive is he has time to get over this painful loss before he drives down Magnolia Lane to try and win his first major and move into the “Big 4” conversation with Spieth, Rory McIlroy and Jason Day.