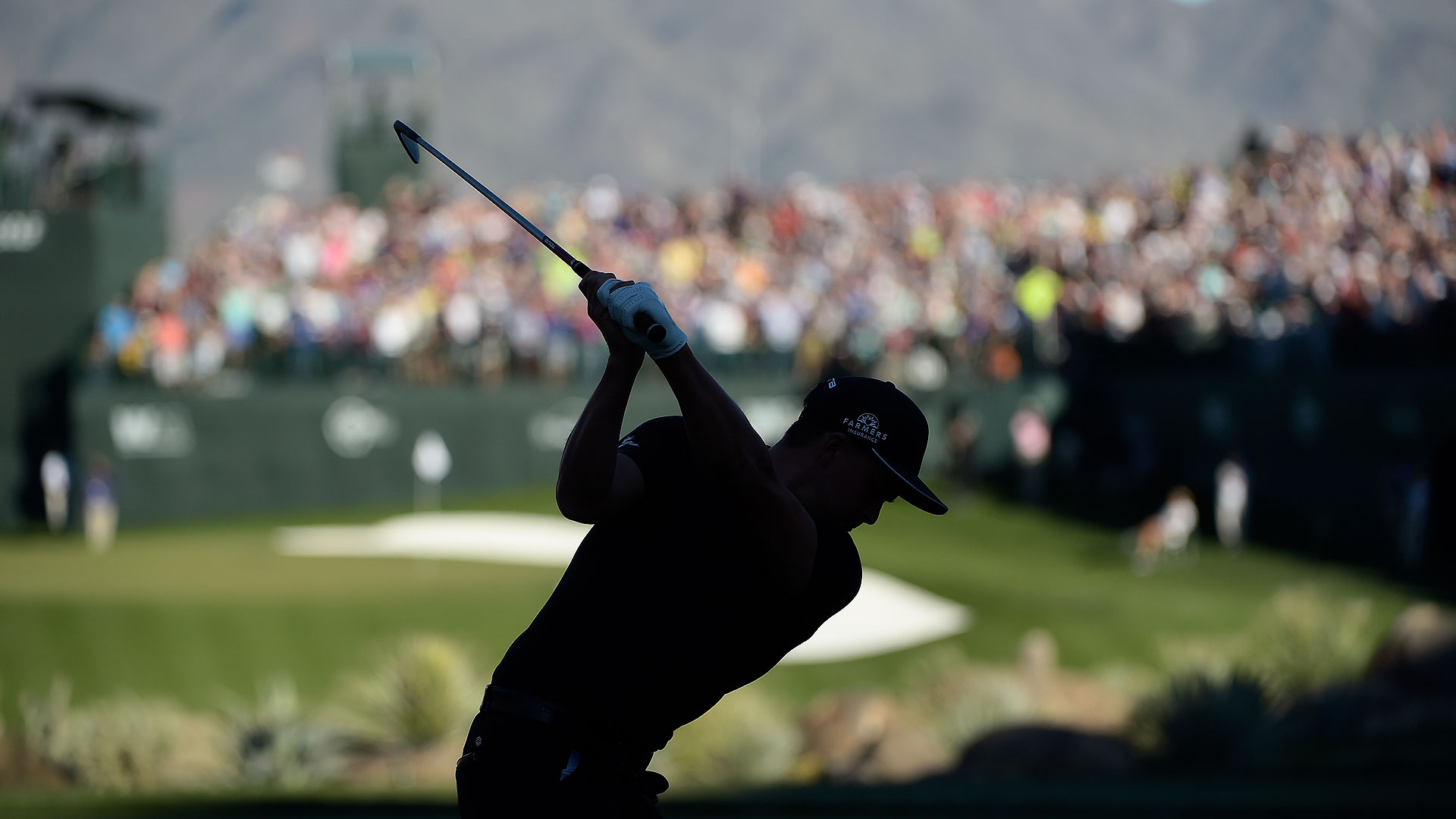 SCOTTSDALE, Ariz. – We’re through only two rounds at the Waste Management Phoenix Open and already the largest outdoor golf party has gifted us with plenty of storylines.

Bubba Watson’s questionable comments earlier this week brought out the boo birds to TPC Scottsdale. Phil Mickelson continues to thrill and spill in his attempt to get his swing changes grooved before the Masters. And Rickie Fowler has already become the new fan favorite here as he’s gushed about his love for the wild atmosphere in Phoenix.

Oh, and there was an ace by a robot, some “dabbing” and Ian Poulter putting one-handed.

That was just the warm-up act.

Now starting the weekend one stroke behind James Hahn, Fowler will be chasing his second win of the year and fifth in nine months in front of a potentially record-breaking crowd.

The fans will be turning out to see Fowler - and for the party at 16 - but there are plenty of good stories on the leaderboard.

Hahn made a name for himself three years ago when he birdied 16 and then celebrated with the “Gangnam Style” dance. He became better known as a PGA Tour winner last year when he knocked off Dustin Johnson and Paul Casey in a playoff at Riviera.

“It's the one week out of the year where you're allowed to do anything you want and not get fined,” Hahn said. “So the fact that the PGA Tour is a little lenient on us doing, you know, whatever things you want to do on that hole, it's good for golf, good for the game, good for the fans that come out here. They support the golf tournament, so might as well give them a show.”

Before Hahn prepares to defend at the Northern Trust Open, he heads into the weekend leading by himself for the first time. If he has a sleepless night on Friday at least it will be in his own bed. Hahn lives about 10 minutes away and is a member at TPC Scottsdale.

He got a member’s bounce in the second round that set him up for his sixth birdie of the day. He pulled his second shot into the par-4 6th, his 15th hole of the day, but it bounced off the side of a hill after nearly beaning a napping fan and settled 6 feet away.

“I have played this course so many times, and it always kicks off that hill,” Hahn said. “I knew if I pulled it a little bit left that it would kick on the green. It's unfortunate the ropes are a little close to the green, but, you know, it was rewarded for a member's bounce, and I am a member here, so ... I pay my dues.”

Hahn showed Friday that Fowler is not the only player who fully embraces the challenge of playing in front of a boisterous crowd. Along with his dance in 2013, Hahn did 10 push-ups Friday as a self-punishment for not hitting the green at 16 the first two days.

“I hit a horrible shot,” he said. “I missed the green yesterday and missed the green today. I was like, all right. I got booed again. It's no fun when you get booed on 16. I felt obligated to give them 10 push-ups. It was well-deserved for them. They came out to watch the gun show, so I popped them out right there on the tee box.”

Fowler put on a different kind of show at 16. He arrived at the tee fresh off a birdie at the par-5 15th, and then as the fans started to quiet down he raised his arms in the air and egged the crowd on to get louder.

They continued to cheer as Fowler hit his tee shot to 25 feet, but then the boos rained down when he left the birdie putt short.

His only bogey of the day came on 17 when he took three swipes from 26 feet, but Fowler answered right back when he stuck his approach to 3 feet on 18.

Fowler shares second with Danny Lee, the 2008 U.S. Amateur champ and a winner last year at The Greenbrier. The two have engaged in a friendly war of practical jokes, but after Lee recorded a 5-under 66 in Round 2 he said the pranks will probably be on hold as they attend to business this weekend.

“At the moment we are just waving a white flag at each other, having a rest at the moment, but I can feel a big one coming up from Rickie,” Lee joked.

Lee, Fowler and Hahn will be together in the final group on Saturday.

“It's one of my favorite events having the loud crowd out there,” Fowler said. “Hopefully we'll give them a reason to get loud.”