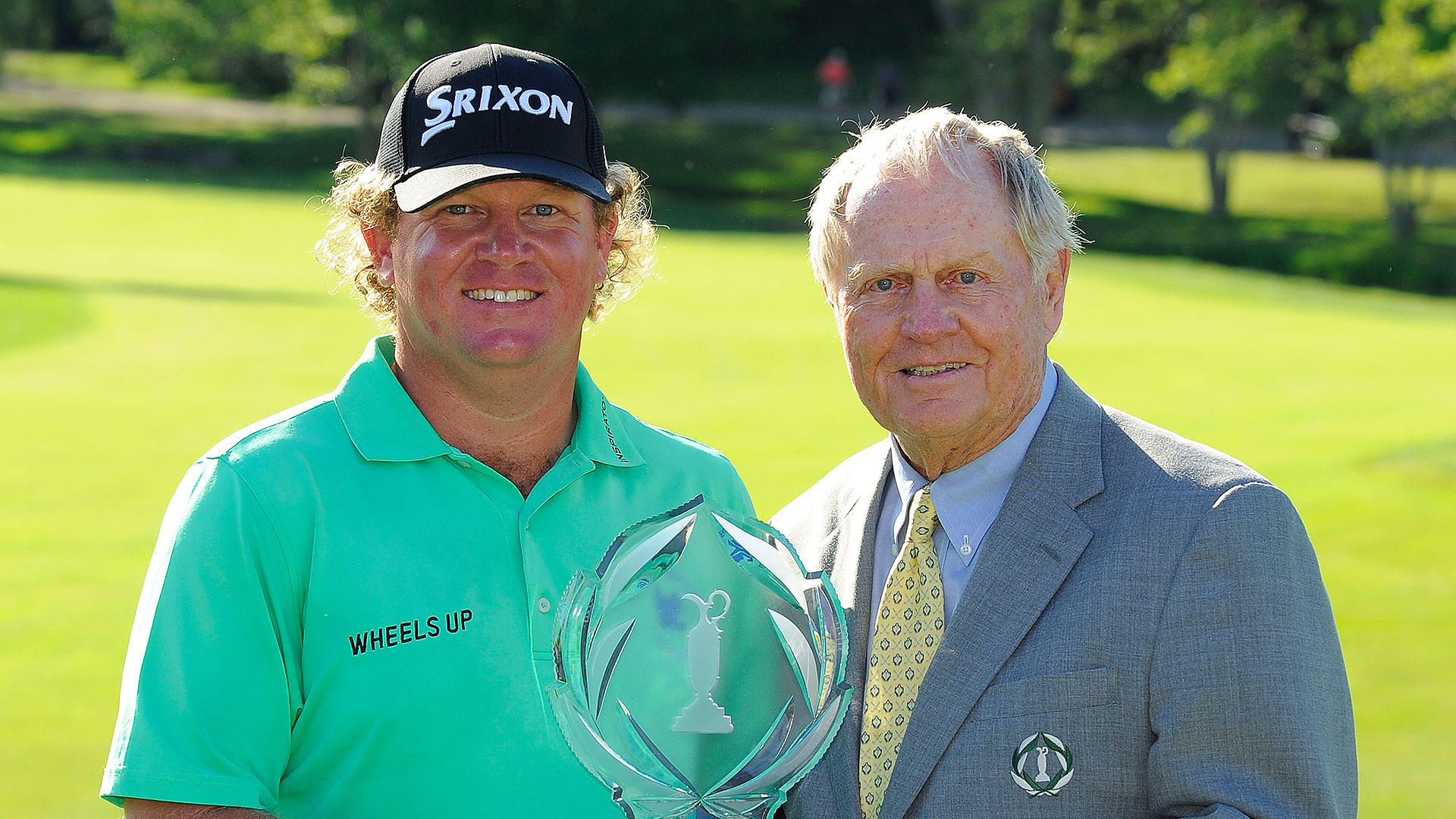 DUBLIN, Ohio - For three straight days, conditions at the Memorial Tournament were soft and low scores were plentiful.

Sunday was a whole different story.

The threat of storms brought plenty of high wind and the scores followed. What looked to be a shootout turned into a struggle for survival on the back nine with several big names succumbing to the carnage.

That was just fine with eventual champion William McGirt, who won for the first time in 165 starts. After handing him the trophy, tournament host Jack Nicklaus told McGirt he won plenty of tournaments with the same formula.

“The golf course gave up birdie after birdie after birdie, and then all of a sudden, a little teeth got into it coming down near the end, and you just stayed dead steady right on track and kept on going,” Nicklaus said to McGirt. “That's what it takes to win golf tournaments. I've won - I don't know how many tournaments - I won half of my golf tournaments watching everyone else self-destruct. I didn't win them. They just self-destructed, and that's the way you win.”

McGirt made 15 straight pars to close out his first win, none bigger than the 9-footer he made to beat Jon Curran on the second playoff hole.

“Luckily, the wind kept it from being a shootout at the end, and pars were good enough coming down the stretch,” McGirt said.

Not bad preparation for his first U.S. Open in two weeks.

With his victory on Sunday, McGirt is now exempt for Oakmont and avoids a 36-hole qualifier on Monday. He also receives a three-year exemption and a check for $1.53 million. His last professional win - in 2007 - was for $16,000.

“I thought I'd hit it big,” said McGirt on his mini-tour win.

His second win was much tougher. McGirt grinded out a victory on a day when 29 players started the final round within five shots of the lead. But with wind gusts anywhere from 15-25 mph, the bogeys - and others - started piling up.

Phil Mickelson began the second nine with two straight bogeys, and then his chances ended when his ball came up short of the green and rolled into the water on the 186-yard, par-3 12th.

World No. 1 Jason Day nearly put two balls in the water before recording a double bogey.

Dustin Johnson found the green, and then three-putted from 54 feet.

Matt Kuchar bogeyed 12, doubled 13, bogeyed 15 and just like that his chances for a second Memorial title were gone.

The tee at No. 12 is elevated, so tee shots were ballooning in the wind. Players who kept their tee shots low risked hitting too much club and sailing over the skinny green.

It’s no surprise the eventual winner stepped up and hit one of the best shots of the day at 12. McGirt took the most aggressive line of anyone in the last seven groups, and his tee shot landed 21 feet away. Not a dart by any means, but it was one big hurdle to jump in his quest to change his fortunes after 12 years as a professional.

“There were times on that tee box it could have been anything from 4-iron to 7-iron depending on the wind gust, and I got over it and just said, ‘OK, please let it go the right distance,’” McGirt said.

His prayers were answered, and now the 36-year-old will get to savor his maiden win before teeing it up at the U.S. Open.

“I wondered for years if I would ever get to the PGA Tour, and then once you get out here, OK, you've played 160 events. Are you ever going to win? You've put yourself in position a couple of times,” McGirt said. “But I think you have to get your nose bloodied some to learn how to handle it, and I definitely had my nose bloodied a few times.”

It will be McGirt’s second start in a major. At his first major, the 2012 PGA Championship at Kiawah Island, McGirt received a piece of advice that helped him win on Sunday.

McGirt was chatting with Tiger Woods’ caddie, Joe LaCava, and the 14-time major champion overheard McGirt saying he doesn’t look at leaderboards on the back nine.

Woods came over and joked McGirt was an “idiot” for not knowing where he stood.

He didn’t make the same mistake at the Memorial.

“After the discussion we've had at Kiawah, I've looked every chance I have,” McGirt said.

He prevailed after a long, tough final round at Muirfield Village, and now McGirt’s name is alone at the top.