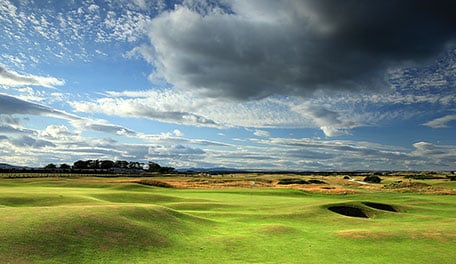 The Old Course at St. Andrews is on every golfer’s bucket list, and it’s often listed by the game’s biggest stars as their favorite course.

But it’s not always love at first sight with the Home of Golf.

Waves aren’t crashing against the course like at Pebble Beach. There isn’t the “I-can’t-believe-I-made-it-inside-the-gates” feeling of Augusta National. And outside of the Road Hole 17th and No. 18, none of the holes really stick out.

You can't even curse the architect when your ball lands in a pot bunker, because, well, it's not exactly clear who designed the course in the early 1400s.

Bobby Jones famously became so frustrated by St. Andrews at the 1921 Open that he stormed off the links after 11 holes in the third round. Sam Snead said it looked like an “old abandoned golf course."

Jones and Snead would both go on to win the claret jug at the Old Course, but St. Andrews still doesn’t leave a good first impression with many of today’s players.

“Hated it,” Rory McIlroy said last year at the Dunhill Links. “Thought it was the worst golf course I've ever played … I just stood up on every tee and was like, ‘What is the fascination about this place?’ But the more you play it and the more you learn about the golf course and the little nuances, you learn to appreciate it. Now it's my favorite golf course in the world, so it's definitely a course that grows on you.”

“Honestly, I wasn’t a fan in the beginning,” said Kevin Na. “I didn’t understand why the golf course was designed like this. I couldn’t see the holes, I couldn’t see the bunkers. I thought 17 and 18 were cool, but besides that I didn’t think it was very good. But the next time I played it … I knew a lot more about golf courses and architecture and I remember playing the first practice round and the second practice round, and I was like, ‘You know what? This place is really cool. I get it now. I get why this is one of the coolest places to play in the world.’ So it took me two tournaments to figure that out.”

However, not everyone had a bad first experience.

“For me it’s the most special place in golf,” said Shane Lowry. “We’re lucky enough on the European Tour we get to play there every year in the Dunhill Links. The first time I played it it was amazing. I was lucky the second time I played it was in the Open Championship in 2010. I’m not sure how the golf course would rate if it wasn’t where it is, but as regards to the whole aura about the place. That’s what makes it for me.”

“It’s always been a magical place,” said Justin Rose. “That atmosphere on holes No. 1 and 18, you feel like the walls are watching. There could be not a soul around, but it has that magical vibe about it, and you almost feel like your adrenaline is going and you could be the only person around. And very few places have that magic.”

It certainly helps to try and gain a little course knowledge before arriving. Jordan Spieth, who is trying to win the third leg of the Grand Slam, said last week he had been prepping for the Old Course by playing it on the simulator in his home in Dallas.

While simulators weren’t available in Ben Crenshaw’s day, he also studied up before his first round at St. Andrews.

“I had seen pictures of it before and kind of knew a little bit of what I was going to see,” Crenshaw said. “I must say when you see it for the first time just off the side you go, ‘God, where’s the course?’ Because it’s encased in two other golf courses. And it’s a narrow strip within these courses, and you’re looking up, ‘Where is it?’

“But when you see it and play it for the first time it’s not like anything else in the world. If you talk about knowing a golf course, there is a lifetime of knowing about that course, and discovering different ways to play it is the fascination of it. I’m looking forward to watching the British Open this year because a British Open at St. Andrews is extra special. I’ve always enjoyed watching how people get around it because there’s a million ways to play it and it changes all the time and you have to know it. You have to have a knowledge of it unlike any other. It’s very difficult [for a] first-timer to win there.”

But no one had a first experience with the Old Course quite like Gary Player. So we’ll leave you with the Black Knight’s equivalent of a mic drop for first impressions of St. Andrews.

“My first experience at St. Andrews was far from the typical trip a professional golfer will have today, and my first impressions of the Old Course were forgettable,” Player said via email. “It was 1955, and my golf club in South Africa took up a collection to fund my ticket to the UK. “Not being able to find affordable accommodations, I went and slept on the beach the first night. I put on my waterproofs and my sweater and I slept curled up in a sand dune. That is quite unfathomable in today’s game, but there I was on my first trip sleeping under the stars! “You have to remember that St. Andrews is not a typical Open Championship course. The fairways are wide and generous, and there is not a great premium for driving the ball. That did not stop me from missing it completely on my first shot. I missed it so bad that the starter asked, ‘What’s your handicap?’ I am certain that I could never forget my first time teeing it up at St. Andrews even if I tried.

“Although my first round at the Old Course left a sour taste in my mouth, St. Andrews is a place you grow to love – especially the town and the people. The golf course was built hundreds of years ago, but continues to stand the test of time. Incredible. It is a golf course that you have to play a couple times to understand and fully comprehend the strategy of the course, and I truly think that the designers were ahead of their time.”