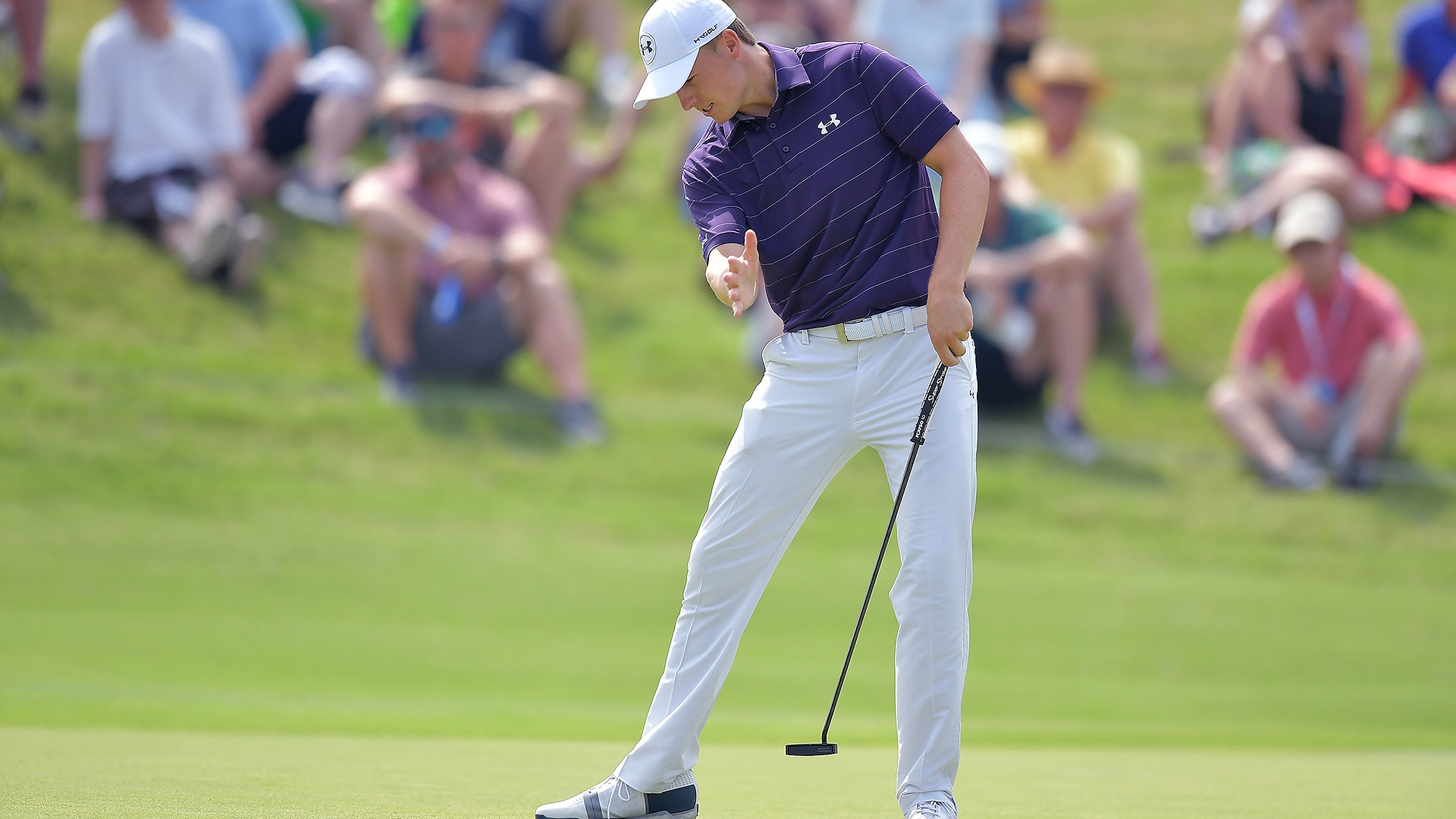 IRVING, Texas – On Jordan Spieth’s website, there is a telling quote from 2015 about his equipment.

"I'm very picky with my driver and my putter,” he said. “They have to look and feel right, so that when I'm in a big tournament and everything is on the line, all I have to do is hit the shot.”

Spieth is one of the rare golfers who has been in a committed relationship with his putter. He’s used the same Scotty Cameron 009 prototype since he was 15 years old. The trusty club has been there for all 12 of his professional wins, including Spieth’s blockbuster 2015 season when he made a run at the Grand Slam.

During an appearance on the “Tonight Show with Jimmy Fallon” last year, Spieth even joked he’s cozied up to his putter in bed.

"It's a putter I've been using for some seven-eight years now,” he told Fallon. “It used to be black but now it's all rusted, chipped up and there's like rust on the inside of it. I still use it. There's been a couple nights I've been happy enough I've slept with it."

But this week, Spieth’s 009 is not in his golf bag and it’s definitely not in his bed.

He decided after a missed cut at TPC Sawgrass it was time to try a new putter. Spieth started thinking about it before The Players, and he made the switch this week.

“It's nothing crazy new, but obviously, I've got a putter I've worn out for a number of years and it helps me lineup a bit better, this one right now, and that's kind of been my struggle is lining the putter up where I want to,” he said. “I'm falling into a nice line and a nice setup, which has left me more comfortable. I just haven't quite dialed in the speed yet, and I wasn't sure what that would be like today. A little off on the speed. So, hopefully I can make the adjustments.”

Spieth shot a 2-under 68 and took 27 putts Thursday with a Scotty Cameron T5W mallet. He’s used a similar putter before in the final two rounds of the 2014 Open Championship and at the Bridgestone Invitational. Those are the only times he’s flirted with a new flatstick.

Spieth wasn’t thrilled after multiple questions about his putter change.

“I haven't been comfortable standing over it for a little while, and so I just wanted something that's a new look, and the bigger a deal that's made out of it the more bothersome that is for me,” he said. “It's not really that big of a deal, and every guy switches putters every single week. It's nothing new. Just a new look for me for the time being.”

He’s right. It’s not a huge deal. Spieth could put the 009 back in the bag at any time. He could also go on to win 10 majors with his new wand. Who knows?

But when one of the best putters on Tour makes a switch, it’s bound to draw some attention. He has only dropped to 39th in strokes-gained putting, and Spieth won his ninth PGA Tour title in February at Pebble Beach. He’s so good at putting, Spieth’s fellow pros stopped to watch him practice at Riviera after his impressive performance on the bumpy poa annua greens.

It’s a reminder of how quickly a player can fall out of love with a putter. It’s the club that requires the simplest stroke, but the relationships are the most complicated.

Danny Willett won the Masters last year and then broke his winning putter at the U.S. Open.

"The putter has been bad all week,'' Willett said. "Unfortunately, it's now in two pieces.”

Mark Calcavecchia, who has tried every putter and putting style imaginable, told USA Today in 2015, “I have 40 putters … and I hate every one of them.”

In the same article, Colin Montgomerie said he used seven different putters in eight rounds, which included a win at the Senior PGA Championship.

"I change with the weather," he said.

Like Tiger Woods, Spieth has done the exact opposite.

Woods famously won 13 of his 14 majors with a Scotty Cameron Newport 2 GSS. He used an older Newport to win the Masters in 1997.

Woods benched his Scotty in 2010 and fiddled with several Nike putters. When Nike exited the equipment business last year, Woods immediately put his magical wand back in the bag.

Even when his Nike putter was in play, Woods kept a close eye on his Cameron putters. He told his kids those were “daddy only” clubs.

It’s proof that no matter what happens, Spieth can always return to what has worked before.