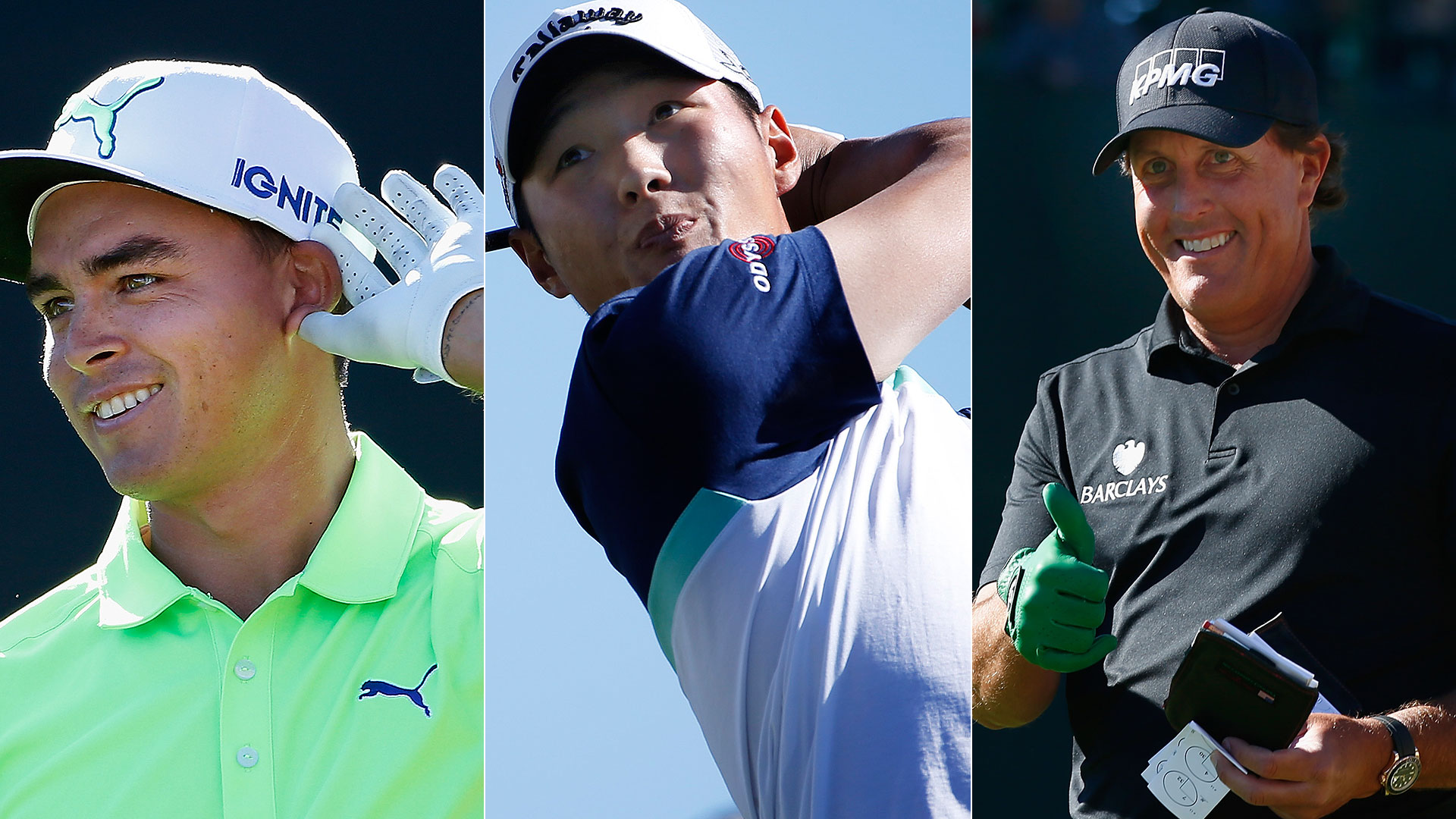 SCOTTSDALE, Ariz. – When Tom Weiskopf toughened up TPC Scottsdale two years ago, he hoped players would never reach 20 under again.

It looks like he will get his wish for another year.

Danny Lee stayed calm and collected while surrounded by a record-setting crowd of more than 200,000 people Saturday to post a 4-under 67 for a three-shot lead over Rickie Fowler (1-under 70) and Hideki Matsuyama (3-under 68) heading into the final round at the Waste Management Phoenix Open.

Lee’s at 13 under par, so rest easy Phil Mickelson and Mark Calcavecchia, your record total of 28 under par is safe ... probably forever.

But don’t worry low-score lovers, this is still the Phoenix Open. It’s just going to be a little harder to win the trophy on Sunday.

Bryce Molder (7-under 64), Mickelson and Boo Weekley (6-under 65s) showed there are still low scores out there.

There was still an insane amount of people at the event. For the first time more than 200,000 fans came through the gates. The final number was 201,003, which shattered the one-day record of 189,722 set in the third round two years ago. Outside of auto racing, it was the highest-attended day at a U.S. sporting event.

And all those fans meant there was still a gigantic party going on all over the course on a cloudless, 70-degree day. It was a really good day to be an Uber driver.

But for the players in the final two groupings, the birdies were much harder to come by after Weiskopf redesigned several greens, moved a few tees back and tightened some landings areas to put more of a premium on driving, even for the longer hitters.

“Making birdie out here is not easy because of the greens being so firm,” Lee said. “But the good side is greens [are] so fast and rolling really truly. If you just know where to putt it, I think you have a good chance to make long putts out here.”

While Lee is in the ideal spot, a Sunday charge will be more difficult to pull off for players like Mickelson, who will start the final round five shots back.

“It's a lot harder to catch somebody,” said Mickelson, a three-time Phoenix Open champ. “I don't know what the number is going to be tomorrow. I just know that I'm starting to play well. There is a lot of holes here where you simply cannot get the ball within 15, 20 feet. So it's going to come down to the putter.

“A lot of the nuances and subtleties in the new design are taking balls away from the hole, so I have to make a lot of putts,” he said. “If I get hot with a putter like I did today and make a few 20-, 25-footers, I can have a really low round. But it's not the course where you can just knock down the pin all 18 holes. There's maybe 10, 12 that you can, but not all of them.”

That could be good news for Matsuyama and Fowler.

It’s a familiar spot for Fowler, who has won four of his five trophies coming from behind, the only exception being his win two weeks ago in Abu Dhabi.

“I have been in both positions,” Fowler said. “I feel really good about tomorrow. Ultimately, like I said, I wanted to be out front because I felt good in Abu Dhabi, kind of controlling the tournament from up front. But the way I played today that's not the case, so excited to go chase them down tomorrow.”

Fowler, Matsuyama and the rest of Lee’s challengers have history on their side, too. Five of the last six Phoenix Open champions have rallied to win on Sunday.

But Lee has some solid stats on his side. He leads the field in driving accuracy, strokes gained-putting, and is tied for most birdies made.

“I always struggled [with driving] out here before, but seems like this week I have been driving it really nicely, which you need to do out here, and that's the key of my game this week, I think,” he said.

Lee broke through for his first PGA Tour title last year at the Greenbrier, but he’s never had the 54-hole lead resting on his slender shoulders.

Lee admitted he’s not exactly sure how his game will hold up in what’s going to be another crazy day in Phoenix with Fowler once again in his group and Mickelson, a former Scottsdale resident and Arizona State alum, in the group ahead.

“I don't know,” Lee said on how he will sleep tonight. “I’ve never been into this situation before, so I will tell you tomorrow morning.”