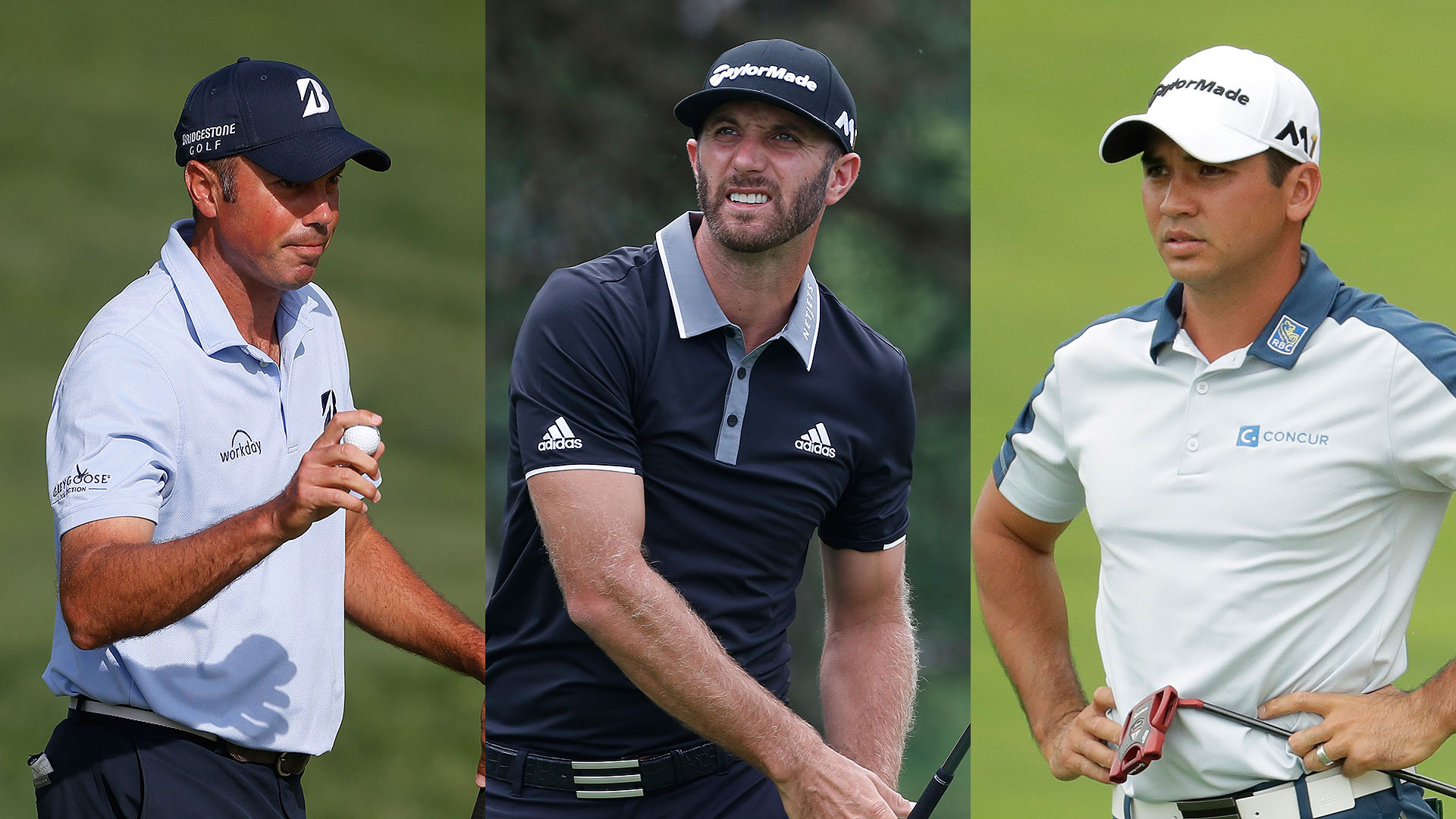 DUBLIN, Ohio - It will be a mad dash to the finish at the Memorial Tournament.

Officials moved up tee times for Sunday’s final round because of the threat of afternoon storms, and a whopping 20 players are within four shots of the lead held by Matt Kuchar, William McGirt and Gary Woodland at 14 under par.

Players will tee off from 8:30 a.m. to 10:30 a.m. in threesomes off Nos. 1 and 10 in what will likely be a wild Sunday. The greens at Muirfield Village were already soft from daily rain and no wind, and the putting surfaces will be even mushier for the final round after storms came through Saturday afternoon and delayed the third round with eight players still on the course.

Even Rory McIlroy, who is five strokes back, isn’t out of it.

“It just makes you focus more,” said Adam Hadwin - who is one back - on the bunched leaderboard. “You know that one shot means so much. It can be the difference of first and seventh right now. So it's just a matter of getting into every shot, knowing every shot matters.”

Players are usually giddy when conditions are soft, but several contenders plan on staying patient in the final round instead of firing at every pin.

“You just have to tell yourself on this golf course there's four par 5s. They're usually all reachable,” Simpson said after a 6-under 66. “You've just got to be patient. I was only 1 under through seven holes, missed a couple of short opportunities for birdie, but I just hung in there, made a good putt at 8, eagled 9, and all of a sudden, I was kind of right back into it.”

The fairways are generous at Muirfield Village, but the rough was already thick before Saturday’s rain, water comes into play on 11 holes and getting up and down after missing the green is no bargain.

Kuchar learned there are other surprises lurking around the course, too. His tee shot on the par-3 fourth was tracking toward the pin, but his ball landed just short of the green and hit a sprinkler head. It shot up in the air and down to the bottom of a hill leading to his second of five bogeys on the day.

“I told my caddie after that, I said, these things tend to even out, but we're due for some good breaks,” Kuchar said after a 2-under 70. “That was clearly a very bad break.”

The 2013 Memorial winner responded with seven birdies as he tries to win for the first time since the 2014 RBC Heritage. It couldn’t come at a better place. In addition to his five top-10s in 11 starts, Kuchar is a combined 68 under par at this event since 2009, 35 shots better than Johnson.

Kuchar shares the lead with the McGirt - who shot an 8-under 64 and is still looking for his first win - and Woodland, a two-time Tour winner who has made only one bogey all week and leads the field in scrambling (15-for-16).

“Hopefully, the rain stays away and we can go out there and make more birdies,” Woodland said. “I'm feeling pretty confident about where my game is. I've been playing well for a while, and it's starting to come together.”

Rookie Emiliano Grillo had a chance to finish with the lead, but after the rain delay he made a double bogey at the par-4 17th and finished at 13 under along with Johnson, Hadwin and Curran.

“On 17, I was ready to hit, and the official told me not to hit, and then they waited a minute to blow the horn,” Grillo said. “So I'm kind of pissed about that, but it is what it is.”

Grillo won the Web.com Tour Championship and his first PGA Tour title in back-to-back weeks in October. Outside of T-17s at Bay Hill and the Masters, it’s been a struggle since then for the 23-year-old from Argentina. Still, with a win this week, Grillo would join Jordan Spieth as the only players under the age of 23 with multiple PGA Tour wins.

Grillo got off to a bad start at his first Memorial before the tournament even started. He tweeted earlier this week he ordered an Arnold Palmer in the clubhouse at Jack Nicklaus’ Muirfield Village.

“We’re not going to give him a two-shot penalty,” Nicklaus joked on Saturday’s telecast.

Kuchar’s bogey on 18 and Grillo’s double on 17 made work a little easier for the rest of the contenders.

Day will have plenty of support from the fans since he spends his off weeks playing social rounds at Muirfield Village. A birdie at 18 Saturday would have given him a share of the lead, but he chunked a pitch shot after his ball landed by its pitch mark and Day closed with a deflating double bogey.

He’s only three back as he eyes his fourth win of the year at a place where, despite his local knowledge, he has yet to finish in the top 10. The good news is his record wasn’t stellar at Bay Hill and The Players, and, well, we saw how that turned out.

“I'm just trying to prove myself that I can play around golf courses that I haven't typically played well in the past,” Day said. “That's what I'm going to try and go with into tomorrow's round with that mentality that I can do it. Hopefully, that's enough.”