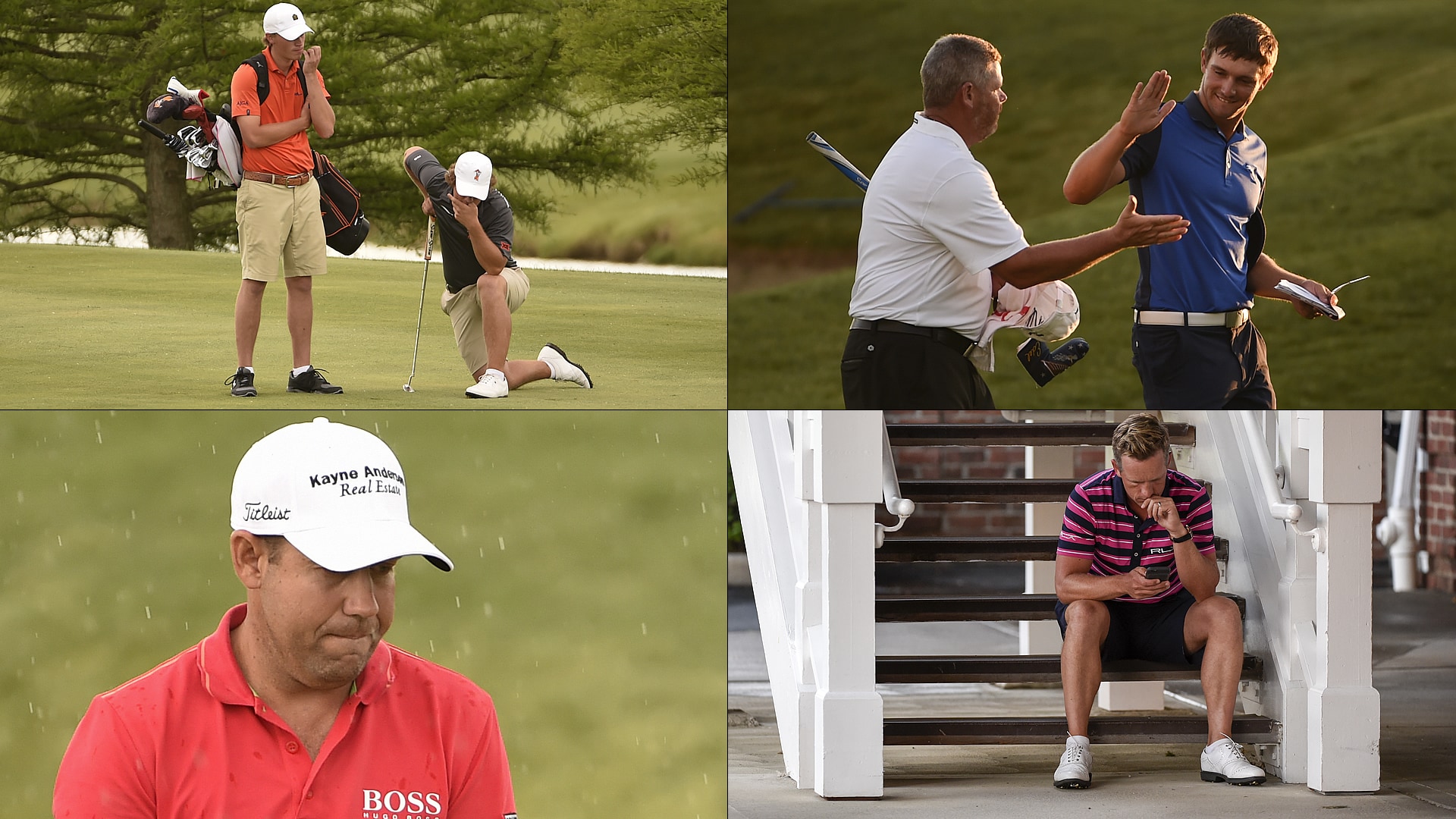 POWELL, Ohio – The 36-hole grind for 13 spots in the U.S. Open started just after sunrise on Monday.

For some players, like former world No. 1 Luke Donald, the grind didn’t end until just after sunrise on Tuesday, in a six-for-five playoff.

It was the end to another wild U.S. Open sectional qualifier in Columbus.

Players from all corners of the game teed off Monday at Kinsale and Wedgewood Golf and Country Club with the same goal – a tee time in 10 days at Oakmont.

The field of 103 included many top pros like Donald, Gary Woodland, Camilo Villegas, Brendan Steele, Adam Hadwin and Kevin Streelman, who just hours before were competing for one of the biggest PGA Tour titles of the year at Jack Nicklaus’ Memorial Tournament.

There were also plenty of amateurs, fledgling pros, college stars, guys who haven’t done enough to warrant a Wikipedia page, and one reigning U.S. Amateur champion (Bryson DeChambeau) who had already given up his spot at Oakmont to turn pro and then went out and qualified again.

Those who made it pretty much had the same reaction as Donald.

“Glad it’s all over,” he said after waking up at 5 a.m. Tuesday to make two pars and earn a return trip to Oakmont.

One player who didn’t join them in the qualifier was William McGirt. He originally had a tee time on Monday, but McGirt went out the day before and won his first PGA Tour title to get into Oakmont.

Everyone who did show up gathered around the hand-written leaderboard to see where they stood while also checking their phones to get the latest scores. The U.S. Open trophy was on display nearby and offered a not-so-subtle reminder to the qualifiers that, Hey, four more good rounds and I could be yours.

But for those who got in – and for a few who didn’t – they took away more than just a spot in one of the four biggest tournaments in the sport.

For Donald, now No. 80 in the world, it was another positive sign as he tries to move back up the world rankings. He used to easily qualify for the majors, but in April he missed the Masters for the first time since 2004 and had to earn his place in the U.S. Open for the second year in a row.

“I want to play majors,” Donald said. “If you’re not playing you don’t have a chance to win. Sitting on the couch isn’t going to do me any good. I want to play for as long as I can.”

Carlos Ortiz learned he was on the right track with his game even after missing nine of his last 11 cuts. He simply went out on Monday and fired a pair of 66s to lead all of the qualifiers in Columbus.

Now the 25-year-old from Mexico is heading to his first major.

“I’ve been playing great the last two months,” he said. “It’s just a matter of putting everything together and now it’s coming together.”

Ethan Tracy (65-68) tied for second with DeChambeau and also qualified for his first major. It capped a roller-coaster week for the 26-year-old mini-tour player from nearby Galloway. He received an invite to the Memorial, a tournament he attended several times as a kid, but missed the cut.

“On Friday I was pretty emotional,” he said. “I put in a lot of hard work and probably the hardest work I’ve ever done, and I’m glad it’s paying off … I know I’m doing the right things and going in the right direction.”

After the qualifier, that direction will be north for a Canadian Tour event, and then Tracy will head to Oakmont where he may run into defending champion Jordan Spieth, a guy Tracy beat on his way to winning the 2011 Western Amateur.

Tracy knew Spieth was going to be a star, but he also knows his game is pretty stout, too.

“I know I can be out there with him,” Tracy said.

Oklahoma State sophomore Zachary Bauchou and two-time heart transplant recipient Erik Compton played in the same group and shot the same score, but they had different reactions after 36 holes on Monday.

“Honestly, probably the coolest thing I have ever done,” said a smiling Bauchou, who drained a 5-foot putt in a downpour to post 4 under par. “I was really excited about it. Coming down the last hole I was like, ‘Shoot! I might get in the U.S. Open! That’s really awesome.’”

Unfortunately for Bauchou and Compton, 4 under was not enough to get in. They were among six players who came back on Tuesday morning for a playoff for the second alternate spot and lost out to Adam Hadwin.

Compton was emotionally spent on Monday, especially since he almost quit in the middle of his second 18 holes. He nonchalantly tried to knock in a par putt and missed from 2-inches. Yes, 2 inches.

“It was so demoralizing,” he said.

But he pressed on because Compton knows what can happen if you make it through.

In 2014, he survived a two-hole playoff to punch his ticket to Pinehurst and then finished tied for second behind Martin Kaymer.

“I feel like my form is close to where it was [in 2014], but you need to have some things go your way,” he said. “And you have to be really tough. It’s hard to be tough when you’re not a top player in the world, and you’re somebody who is always kind of grinding to keep your card. You’ve got to be tough every day, on every shot. That can wear on you after a few years.”

Last year, Steele was one the many pros who withdrew before the qualifier even started.

“I played really bad on Sunday [at the Memorial] last year and just knew my attitude wasn’t going to be good enough to go battle for 36 holes,” he said after easily making it to Oakmont with rounds of 66-68. “I didn’t want to give it half an effort, and so I pulled out last year.”

Now his dream of winning the U.S. Open continues.

“That’s the beauty of the U.S. Open,” Steele said. “That’s why it’s everybody’s dream to be able to compete and even just play this round. You get to come out here and play with some great players.”