JOHANNESBURG, South Africa -- Ariel Canete closed with a 4-under 67 Sunday to win the Joburg Open for his first European Tour title. Canete posted a total of 19-under-par 266.

Canete, who led by one when the third round was completed earlier Sunday, fought off three challengers for the title. This was just the third top-10 finish of Canete's European Tour career. His best previous finish was a share of seventh, which he accomplished twice.

'I was in Argentina and it was the holidays,' Canete stated. 'My category has not been so good and I was sitting there doing nothing. I thought to myself, 'let's go to South Africa and give it a try, you never know'. Now I am very, very happy.'

Entering the tournament, Canete had no status on tour after finishing 146th on the Order of Merit last year and then failing to get his card via Qualifying School. That all changed with this win.

Andrew McLardy, who led outright on three separate occasions during the final round, finished two back at minus-17 after shooting 3-under 68.

Hennie Otto closed with a 4-under 67 to end alone in third at 16-under-par 269. Otto and Alex Haindl also had a share of the lead during the final round. Haindl stumbled late to share fourth at minus-13. He shot 1-under 70 to end alongside Mark Murless, who closed with a 68.

Lightning forced the suspension of play on Saturday as the final group was playing the ninth hole. Players returned to the course Sunday morning to resume round three, while the final round got underway at the same time. There were no weather problems Sunday, allowing the completion of both rounds.

Canete led by one entering the final round, but lost that lead as he dropped a shot on the second. He parred his next two, but fell behind McLardy, who birdied the fifth and seventh, to get to 15 under. Canete joined McLardy in the lead as he birdied No. 5.

The 31-year-old Canete parred his next three holes, while Haindl and Otto join he and McLardy in the lead.

McLardy birdied the 12th and Otto the eighth, both to move to minus-16, one stroke clear of Canete and Haindl.

Canete responded with a birdie at the ninth to create a three-way tie for the lead. He fell one behind McLardy with four straight pars.

Haindl fell off the pace with a bogey on 14. Otto tripped to bogeys at nine and 10 and he did not get back within two the rest of the way.

So it was down to Canete and McLardy. McLardy was four groups ahead of the Argentine and he was the first to reach 17 under with a birdie on 15. However, he parred the final three holes to finish there.

Canete joined the South African at minus-17 with a birdie at 15. Canete closed with back-to-back birdies to pull away and earn his first tour win.

'I putted really well all week,' admitted Canete. 'The lines always seemed very clear in my mind, while my caddie helped a lot with club selection, as the ball travels farther here than it does at home in Argentina.' 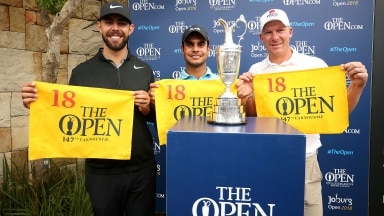 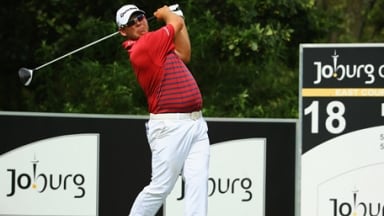 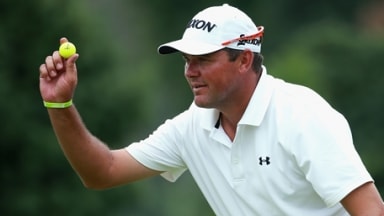 Wallie Coetsee holds a one-shot lead at the Joburg Open after a 6-under 65 on Friday put him 12 under par.