INCHEON, South Korea – Na Yeon Choi birdied the 18th hole on Sunday to capture her second win of the season at the Hana Bank KOLON Championship.

Playing in her native South Korea, Choi fired a 5-under 67 in the final round and finished at 10-under 206, one shot ahead of Yani Tseng and Maria Hjorth.

Choi, who claimed her first career LPGA win in September at the Samsung World Championship, became only the third player with at least two victories this season.

Money leader Jiyai Shin and world No. 1 Lorena Ochoa both have three.

Tseng, who shared the overnight lead with Choi, also birdied the 18th hole for a 68 to tie Hjorth for second place at 9-under 207.

Hjorth, after making five birdies in her first eight holes, finished with 10 consecutive pars for a 67.

Ochoa failed to break 70 in her three rounds on the Ocean Course at Sky 72 Golf Club. The Mexican star closed with a 73 on Sunday and tied for 44th place at 6-over 222. 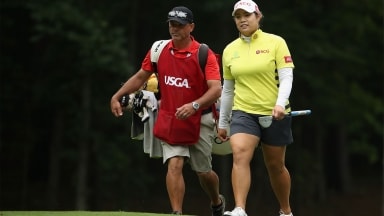