DUBLIN, Ohio -- Jeff Sluman posted a 4-under 68 on Saturday to retain a piece of the lead after three rounds of the Memorial. Sluman stands at 12-under-par 204.

Woody Austin carded a 7-under 65 to move into a share of fifth place at minus-11. He was joined there by Jonathan Kaye, who bogeyed 18 to shoot a 4-under 68. Peter Lonard is one stroke further back at 10-under-par 206.

World No. 2 and three-time champion Tiger Woods spread four birdies and three bogeys over his round at Muirfield Village Golf Club. His 71 put him in a tie for 10th at 8-under-par 208.

'I didn't get off to a very good start today, I hit some good shots, but didn't make any putts,' said Woods. 'I'm very pleased with the way I hit the ball on the back nine. The only bad shot I hit was on 15. That's the whole story though, I put the ball on the wrong side of the holes too often.'

Sluman opened with a one-shot lead, but had been passed by Toms by the time he teed off. Sluman responded with a birdie at the first to join Toms at minus-9.

The six-time winner of the PGA Tour again caught Toms at 10 under with a birdie at the sixth. Sluman came right back with a birdie on 11, but was joined at minus-11 by Toms and Kaye.

Sluman rolled in a 25-foot birdie try at 12 to tie Toms and Austin in the lead. The 1988 PGA champion tripped to bogey at the next to slip one shot back.

The 47-year-old Sluman two-putted for birdie on the par-5 15th to again grab a piece of the lead. He parred in to remain there.

Toms, the 2001 PGA Champion, opened with a birdie on the first. He then aced the par-3 fourth to jump to 7 under. The 38-year-old kept rolling with birdies on five and six.

He dropped his second shot within 2 feet of the cup to set up a birdie on the ninth and join Sluman and Nick O'Hern in the lead. Toms parred the first five holes of the back nine. He drained a 15-foot eagle putt at the 15th to move to minus-12 and parred out to remain there.

'I've had a couple of victories on (Jack) Nicklaus-designed courses,' said Toms, of his wins at The International and the Compaq Classic of New Orleans. 'I was really concentrating well from the fairways and hitting the right club, which is what you have to do on this course.'

Couples, whose last win came at the 2003 Houston Open, wrapped bogeys at four and seven around birdies on five and six. The 45-year-old then birdied the eighth to get to 7 under.

The 15-time winner on the PGA Tour parred his next three holes around the turn. Couples birdied 12 and 14 to get to minus-9. The University of Houston alum eagled the 15th to get within one of the lead. He closed with a 20-foot birdie putt at the last to polish off a round of 66.

'I just love this place,' Couples said. 'I played nine holes with Jack Nicklaus on Wednesday and I asked him if we could play twice a year here, because it's such a beautiful place. I've always played well here and I'm in good shape again.'

Bryant picked up birdies on one and four, but double bogeyed the second. He stumbled to a bogey on No. 5. He atoned for that error by running off three consecutive birdies from the eighth to jump to 8 under.

Bryant made it three in row as he birdied the 15th. He joined the leaders at minus-12 with birdie on the 17th.

'It was a good day at the office,' said Bryant. 'It was fun. I started off a little auspiciously there, made double at two and bogeyed the par-5 No. 5, and I could get there easily. After that, I just kind of caught fire. It was a good day.'

Ernie Els, the defending champion, managed an even-par round of 72. He stands at even-par 216 in a tie for 55th. 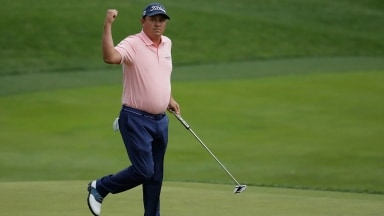 Dufner back inside OWGR top 30 after win

Jason Dufner is back inside the top 30 of the Official World Golf Rankings following his three-shot win at the Memorial Tournament. 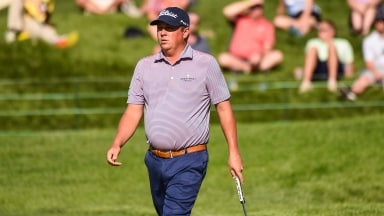 Jason Dufner and David Lingmerth share the opening-round lead at the Memorial, but Jordan Spieth lurks just one shot off the pace. 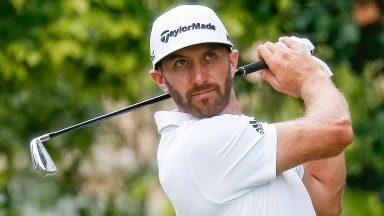 See which players you can expect to contend this week as world No. 1 Dustin Johnson looks to add a fourth title this season at the Memorial Tournament.