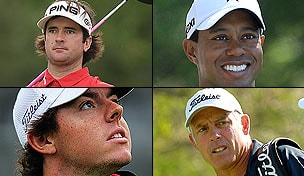 Everyone's got an opinion these days, and while professional golfer Zack Sucher – a regular in 'The Minors' series on GolfChannel.com – is no self-pronounced psychologist, he tells us what kind of intervention he would have on the lives of some of golf’s biggest names.

1. If I were Tiger Woods … “I would do a lot of things differently. I am not going to pile on Tiger, he is getting enough of it from everyone, but I would not have let Steve Williams go. He was the last guy standing by Tiger. I would also go ahead and win this week at Firestone and next week at the PGA. Then maybe people would start to lay off. I am not really pulling for Tiger but he is so good for the game that we really need him to make a comeback.”

2. If I were Steve Williams … “I would be a little upset with Tiger, but I don't really know all the details.”

3. If I were Sean Foley … “I don’t think I’d do much differently. I would continue to work with Tiger until he dominates golf again which I figure is only a matter of time. I would stay with Tiger as long as I could because it would be something great to have on my resume. If Tiger Woods walked up to me and asked me to work with him, all the criticism is on him for deciding to make swing changes and what he decides to do with his game. He’s gotta work on what he thinks is best. I wouldn’t take any criticism to heart for helping him with his swing; it’s not like (Foley) walked up to Tiger (unsolicited) and said ‘Hey, you should start working with me.’”

4. If I were Patrick Cantlay … “I would continue to do what I am doing. If he turns professional and continues to play like he is, he would still not make enough money to have full status, and would only have his six sponsor exemptions for the next year. I think he is making the right decision staying in school.”

5. If I were an amateur and won a PGA Tour event … “I would most likely turn pro and sign a huge contract. I think it would take a top-3 finish or better to make me turn pro. Rickie Fowler made it to third stage of Q-School by money made playing on sponsor exemptions. That would be the best way to make it onto the PGA Tour.”

6. If I were Phil Mickelson … “I’d be as aggressive as I am now. He’s so entertaining to watch. (Mickelson) receives so much criticism for being aggressive but I would rather be aggressive and take chances than to back off of shots. He still hits the ball a long way. He’s definitely not done winning and winning majors. Veterans get smarter and smarter and he’s one of those guys who can think his way around the golf course. Veterans like Phil know how to get their ball in the hole.”

7. If I were Bubba Watson … “I’d probably dress better (laughs). … He’s really entertaining and fun to watch. He has such a huge fan base. But I really gotta say, I would dress better. Even in the Tiger Woods (PGA Tour 12) Xbox 360 game his clothing just looks really bad.”

8. If I were Rory McIlroy … “I would keep having as much fun as he does. Everytime you see him playing, he looks like he’s having such an amazing time. I was really impressed with him at the Masters. Even when he struggled and had such a rough Sunday, he didn’t lose his cool at all. He handled it incredibly well for his age and I really respect him for that.”

9. If I were Darren Clarke … “I don’t know much about Darren Clarke other than him losing his wife in recent years. But I do know that everybody out there loves him. I wouldn’t do anything different if I were him, I would just keep being Darren Clarke. I wouldn’t party that long (for a week straight after the Open Championship) but that’s the culture over there. I wouldn’t have it in me, but I understand why he did.”