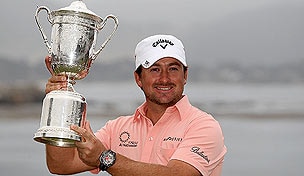 Zack Sucher has at least one thing in common with defending U.S. Open champion Graeme McDowell, but he’d like to have a whole lot more.

They’re both Blazers – products of the University of Alabama at Birmingham’s golf program.

McDowell graduated from UAB three years before Sucher came on as a freshman, so while the two never played on the same team, they belong to the same family.

Zack has never teed it up with the Northern Irishman, but he has met him on McDowell’s return visits to Birmingham to check in with his former coach and the guys on the team.

While their membership to the UAB family is the most obvious similarity that exists between the two, Sucher hopes it’s only a matter of time before their brotherhood has a few more commonalities – namely, victories at the U.S. Open at Pebble Beach.

Sucher’s favorite U.S. Open memory was watching McDowell win last year at Pebble, energized by the success of one of his own on the course he cherishes most.

In recalling his first experience playing Pebble Beach his sophomore year in college, Zack gets lost in the romanticism of the venue.

“It’s such a famous golf course, it would truly be amazing to win there.

“The views are incredible out there and once you reach No. 4 and 5 and the rest of the front 9, and then holes coming down the stretch, I mean you just can’t beat how beautiful that place is,” Sucher said.

Zack has yet to play in a U.S. Open, but he has made it to the sectional qualifier twice – in 2009 and 2010 – narrowly missing his opportunity to advance to the main stage. But when that day comes that he does make it front and center, it’s very likely he could come out on top.

Customary with how U.S. Open courses are set up, the winning score traditionally hovers somewhere around par – a range within which Sucher excels most.

“My game definitely would be best for events and venues like [a U.S. Open]. I play harder golf courses much better. My track record where it takes 20 under to win golf tournaments is not great,” said Sucher.

“All the tournaments I’ve won are the ones that take 5 or 8 under for the week.”

And while Zack may not be in the U.S. Open field this week, McDowell and another of his brethren are: a man by the name of Will Wilcox.

Wilcox played at UAB for just the 2004-2005 season before transferring to Clayton State University. He turned pro upon graduating and is currently riding a several-month-success streak, including winning a Hooters Tour event in April, finishing T2 on the Hooters Tour in May, top 25 finishes in the last two Nationwide events and qualifying for this week’s U.S. Open at Congressional.

Sucher says the U.S. Open is his favorite major to watch second to The Masters and that he’ll definitely be glued to the TV at least three days this weekend to catch the action and to cheer on McDowell and Wilcox.

“I love really hard golf courses and I think it’s cool to watch the best players in the world fighting to shoot even par,” Sucher said.

Now that Zack and his wife Courtney have recently moved from Mobile, Ala. to Birmingham, Zack plans on inviting his family – the guys from this year’s UAB squad – over to his house to hang out and watch the Open.

It took McDowell eight years after he left UAB to win the U.S. Open at Pebble Beach. Zack, just two years removed, has time on his side if he wants to accomplish a similar feat.

The U.S. Open returns to Pebble Beach in 2019, what will be 10 years after Zack left college. With ample prep time, Zack’s dream of winning the Open at Pebble may come to fruition.

But in the meantime, whether McDowell defends his title this week at Congressional, if Will Wilcox breaks onto the scene or if Zack Sucher ever hoists the U.S. Open trophy remain to be seen. But for Sucher and all the UAB family, McDowell’s win last year certainly paved a trail any Blazer would be proud to follow.