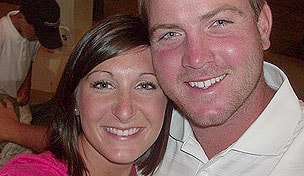 Go to the self-help section of your neighborhood Barnes and Noble and there you’ll find advice on everything from diet and exercise to parenting and relationships. Of the thousands of already penned ‘how-to’ books, there isn’t a one of them that can help Courtney Sucher with her dilemma. The manual she needs doesn’t exist.

“I joke with my girl friend that there needs to be a book about this sort of thing,” Courtney said.

The paperback she wishes she could get her hands on? ‘How to be a Professional Golfer’s Wife: A Woman’s Guide to Navigating the Lonely Road.’

Most people understand that the life of a touring pro is an isolated one – in and out of hotels, different cities every week, often driving 10 or more hour days from tournament to tournament – but very few consider the seclusion wives and girlfriends endure when their significant others are on the road.

“You cannot plan with golf. I was one of the biggest planners you’d ever met in your life. And now I’m completely changed.”

Her ability to be more flexible isn’t the only thing that’s changed since she started dating Zack. Before Courtney met Zack in the fall of 2006, she had very little exposure to the game of golf or the lifestyle of the men who play it.

“Golf was always boring to me. When Zack and I first started dating he would be watching golf and I would say, ‘Turn that off,’ and I was like ‘Really? That’s what you do?’”

Courtney didn’t understand golf or Zack’s affection for the game. Luckily, though, it didn’t take long for her to come around.

“The more Zack and I got to know each other the more I wanted to know about [golf] because that’s what Zack’s passion is,” Courtney said.

The two dated all throughout college but Courtney was robbed of any sort of summer romance. Zack would be gone, on the road during the summer months playing golf tournaments – as most serious golfers do – and thus she learned quickly that dating a golfer was anything but textbook.

“He was usually gone every other week [in college] if not every week. So I kind of already had an insight,” Courtney said.

As much as she missed not having Zack around, she understood then and can appreciate now the positives that result from being apart so frequently.

“I think it’s good in the fact that you really get to know each other. It helps get to know real personalities. He showed how much he cared because he took the time to call and he put forth the effort. Unless men are in it for the long-haul they don’t put in the extra effort.”

Zack’s efforts in their marriage and on the golf course do not go unnoticed by Courtney. She’s undoubtedly his biggest supporter and wants nothing more than to see Zack achieve the pinnacle in his sport.

“I hate that he hasn’t made it by now but I think that he can. I’m not ready for him to give up. I try to keep encouraging him. If anyone has a chance to live his dream, I know he can,” Courtney said.

She’s not letting Zack give up, nor is she putting an expiration date on his golf career.

“You can’t really put a timeframe on golf … I mean, he can win next week. Most people say you don’t even prime until you’re 30, so who knows,” Courtney said.

Whether or not Zack ever breaks onto the Nationwide or PGA Tour, there’s one thing she certainly hopes they don’t wait until they’re 30 to do – that is, to have a family. Preferably, the couple wishes for a more stable environment before bringing a child into this world, but, as is the life of a struggling professional golfer and his wife, you can’t really plan for stability.

The Suchers moved last month from Mobile, Ala. into a house in Birmingham located minutes from Courtney’s family.

Now, with free babysitters nearby and larger living quarters, Courtney can see herself getting pregnant by the end of 2011.

“At the beginning we wanted to wait ‘til he had Nationwide status but it’s been two years and he doesn’t. Everything can change in a matter of minutes. You have to set your own pace,” Courtney said.

The move to Birmingham has been immensely better for Courtney already, since she is now able to fill with family the void of Zack being on the road all the time.

“The last two years in Mobile was a struggle for me. All I did was work, eat fast food and sit down with my dog and watch TV at nights. It was really, really lonely.”

Lonely, yes, but never once has Courtney considered asking Zack to give up on his dreams. Simply because she’s anchored at home doesn’t mean she’s the only one suffering.

“You can always allow yourself to focus on the negative which would be to say ‘You are out on a beautiful golf course doing what you love with no worries and I’m stuck at home alone,’ but the truth is that in reality, he has more stress than I do,” Courtney said.

Through her travels with Zack and in getting to know some of the other married couples in the professional golf circuit, Courtney’s noticed that her woes are felt by many other wives and girlfriends. The manner in which they handle their relationships, however, is starkly different than how she and Zack work at their marriage.

“I’ve noticed that most golfers and their wives live separate lives because I think that’s easy to do. But Zack and I really listen to each other. You can easily get lost and forget about each other’s needs and I think that’s really what makes us as a golfing couple work, is that we try not to forget what’s important,” Courtney said.

For as much as Courtney Sucher wishes there were a book telling her how to be a professional golfer’s wife, it seems she’s already laid the foundation – both in theory and in practice – for her own byline on a best seller.