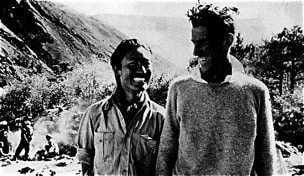 An obsession for Norgay since his maiden Everest expedition in 1935, he assisted numerous climbing teams in their attempts to become the first to scale the world’s highest peak. But, whether it was the weather, well-being of his climbing team or other, unlucky forces ultimately making the summit unreachable, it wasn’t until that fateful late-May day when Norgay partnered with Hillary – who received the lion share of the credit – to stamp a flag on top of the world.

In the history annals for all time, it was an accomplishment that made both men famous and led to long, philanthropic lives.

Truth is it was an accomplishment that never would've happened if each hadn't worked as a team.

Benoit Beisser believes much is the same of reaching his own, personal 'Rooftop of the World' in professional golf.

The 29-year-old Arizonan knows he wouldn't be where he is in the game today – and wouldn't have the opportunities he does – without the help of others.

'When you've been as blessed as I have been in my career and in life, I believe it's important to thank those people who have helped you along the way,' Beisser philosophizes. 'My sister, Laura, calls those people Tenzing Norgays.

'And I've been fortunate to have a lot of Tenzing Norgays in my life.'

Beisser’s perhaps feeling a little more sentimental than normal during this go ‘round of ‘The Minors’ because, well, he finally accomplished what he said he wanted to after playing so well of late.

On June 10 Wah stamped his own flag on Mount W for the first time this year at the Gateway Tour’s Pinnacle Peak CC event in Scottsdale, Ariz.

Scorching rounds of 63-67-66 (20 under) landed him in a playoff with former University of Arizona standout, Nathan Tyler, and, with a birdie on the first extra hole, Beisser stood atop a Gateway Tour podium for the fifth time and moved to almost $58,000 this year, via his $7,500 winner’s check.

“My goal was to win before the end of the (Gateway Tour’s) Arizona series,” Wah explains, from the other end of a joyful phone call with his Golf Channel liaison. “I needed it and I did it.

“I’ve been playing well all year, but for whatever reason, just hadn’t closed the door on one yet. But everything came together this time and I got ‘er done.”

Victory has brought out gratitude in spades.

“One of the best things about winning for me is that victory speech you get to give at the end,” he continues. “You know, getting a chance to thank everyone who you haven’t had a chance to thank.”

His list is as long as it is thoughtful.

“There are just so many true friends I have that seen something in me, and that means a lot,” Beisser says. “The people at Terravita Golf Club, for extending me an honorary membership and treating me like an absolute king every time I go up there; the people at Tour Links, for helping me out with one of their indoor putting greens; Hotstix Golf, for being my own, personal lab for testing equipment and making sure I’ve got the best stuff I could possibly have.

“I could go on and on, and start naming people specifically, but I wouldn’t know where to stop,” laughs Beisser. “So, to all the people I’m close with – you know who you are, and your support means everything to me.”

Those who don’t know the free-spirited Beisser may think he’s just won a major championship, or the lottery, for that matter, considering the degree and passion to which he’s just extended his grace.

For Beisser, though, this latest mini-tour tilt may just as well have been a Masters or U.S. Open title, because no matter the accomplishment, Wah doesn’t take it for granted.

His grandfather – the patriarch of the Beisser family – recently passed away, which also has him perhaps feeling more sentimental than he would otherwise be.

“We knew for a few months that was coming,” Beisser explains,” but, still, it’s a sad thing for our whole family.

“That said, there have been so many positive things and positive vibes leading up this, that I’ve taken this whole time recently, and with my grandpa when I visited him a few weeks back, as an uplifting experience.”

Beisser laments on the fact he was able to have closure with his grandfather on the visit, and how that spurred him on to a good feeling about teeing it up at Pinnacle Peak.

“You know, it’s crazy – he actually said to me, ‘I have a feeling you’re going to win,' so when I got (to Pinnacle Peak) I just had such a positive energy going all week, it really helped carry me through.”

Five months into following Beisser in ‘The Minors’ it’s clear he isn’t a technical player.

However, he isn’t a feel player, either – or at least that kind of feel.

Beisser’s an emotion player, if there is such a thing. Not an emotional player – one who rollercoasters in emotion when playing – but rather a player who takes from positive “energy” and “vibes” as he terms it, to spur him on to play well.

It’s never been more evident than with this latest ‘W.’

“I definitely feed off the people around me, which is why I’m so lucky to have such great people in my life,” Beisser says. “I think everyone, no matter what they’re doing in life, has their own personal mountain to climb, and this just happens to be mine.

His ... and all of his Tenzing Norgays, that is.