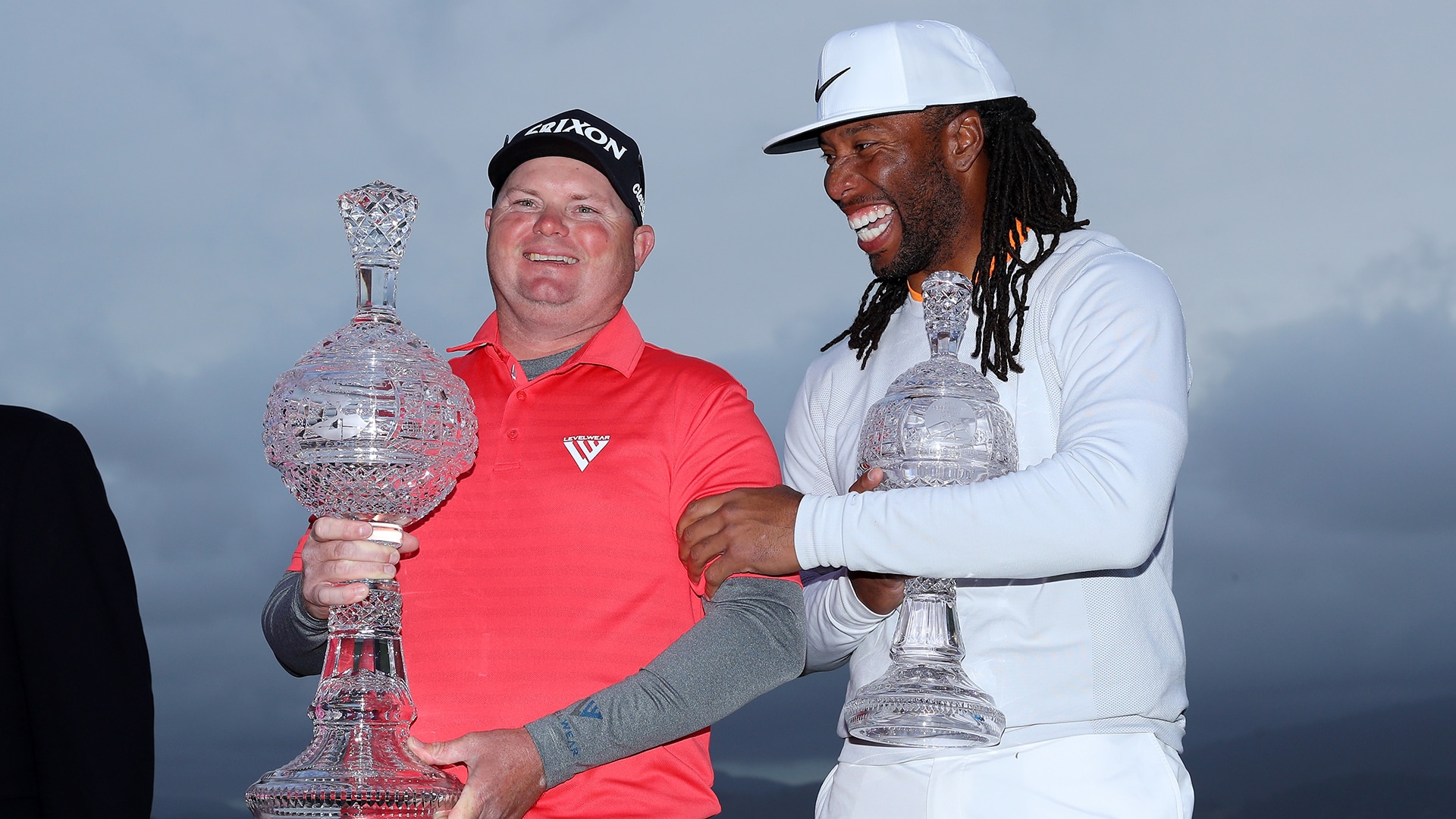 Larry Fitzgerald plays off a 10.6 index at Whisper Rock GC in Scottsdale, Arizona, which equated to a 13 handicap in the team portion of the AT&T Pebble Beach Pro-Am. The scouting report on the perennial All-Pro wideout and future Hall of Famer is that he sprays it off the tee but has 4-handicap's touch, accuracy and competitiveness when his ball is in play. That explains the 28 shots he cut Kevin Streelman in winning the pro-am portion of the competition at 41 under par.

While Fitzgerald played above his usual game, he didn’t win the Jack Lemmon Trophy given to the amateur that helped his pro the most. That award went in a final-round tiebreaker to Gordon Dean, the partner for Jonathan Randolph.

Another impressive performance worth noting among the pro athletes that competed this year was turned in by Justin Verlander, the ace of the World Series champion Houston Astros. Playing off a 4 handicap, Verlander cut Russell Knox 24 strokes in their third-place finish.

While the scores didn’t reflect it, Fitzgerald said he was completely out of his comfort zone and came away with a better sense of respect for the guys that win and play consistently at a high level. He called golf, “the hardest game out there.”

The story resonated in many ways. Before he became a tour pro, Streelman worked as a caddie at Whisper Rock in 2001-2002. Fitzgerald was the first African-American to win the Pebble Beach Pro-Am and the first athlete since Dan Marino in 1988.

Streelman and Fitzgerald became friends through their memberships at “The Rock,” and Fitzgerald flew home to Arizona on Sunday night with the trophy in the seat beside him. Streelman said that Fitzgerald started playing golf less than five years ago. They hit it off as friends, with Streelman initially giving Fitzgerald two shots per hole and then one. “He’s just madly in love with the game,” Streelman said. “It’s a pretty cool story for both of us, especially Larry.”

Where will we next see Tiger after Genesis?

Tiger Woods needs reps. When and where they’ll come during the Florida Swing is still undetermined. Tiger’s long-time manager, Mark Steinberg, had “zero updates” for me in a text on Sunday night, adding, that the Woods' camp “will decide as time goes on.”

Woods has until Friday night to commit to his hometown event, the Honda Classic. In the past, he has committed early, giving the tournament’s executive director, Ken Kennerly, time to promote and prepare for Tiger’s appearances in 2012, 2013 and 2014.

Woods played the best at PGA National in ’12, finishing T-2 after shooting 62 on Sunday to put a scare in Rory McIlroy. He was T-37 on the Champion course in ’13 and withdrew with back spasms in ’14.

Kennerly remains patient, figuring Tiger’s decision will be based on how he plays in the Genesis Open at Riviera, and how his back reacts to tournament competition. Committing to Honda would mean two-straight starts for Woods, after a cross-country flight.

In the mix for the first time is the Valspar Championship. Wood has not played Innisbrook since pairing with Kelly Kuehne in a mixed-team event in 1996. Tournament director Tracy West has Tiger on a “possibility list,” which is based on conversations she’s had with Steinberg. “It’s a possibility, but I don’t think it’s a great possibility,” West said. “At least it’s not a no.”

Horses, a wizard, and a Potter

Ocala is described as one of those towns where everybody knows everybody. Potter’s wife, Cheri, told me Monday that she went to school with Joey, and Bowe’s mother was her cheerleading coach. “Our house is in a horse neighborhood,” Cheri said. “There’s an equestrian park around the corner. The horses are intermixed with all of us.”

The connection to inline and ice-skating is renowned coach Renee Hildebrand, who is based in Ocala. Potter learned the game through his father, who worked on the grounds crew at a local course and came home one day with a club for his son, then barely old enough to walk.

A natural right-hander, Ted Jr. flipped the club over and started swinging left handed. With his father providing guidance, Potter grew up with one swing and became a mini-tour legend, winning his first PGA Tour title at The Greenbrier in 2012. Most of his practice is done at Golden Ocala Golf & Esquestrian Club, and his money games are played at a course connected to one of the retirement communities in the area. That’s where he was the Friday before winning at Pebble, playing for $16 a hole in a 20-man skins game.

Potter recently he went through his first swing change, doing it on his own with the help of caddie John Balmer. That made his victory even more remarkable, considering the way his swing held up at Pebble, and under the pressure of pursuers Dustin Johnson, Jason Day, Phil Mickelson and Jon Rahm.

His nickname, “The Wizard,” is obviously a takeoff on Harry Potter and was given to him because of the short-game magic he showed on the mini-tours - like his hole-out for birdie on the seventh hole Sunday.

“It’s his way,” Cheri said. “He doesn’t care how the others are doing it.”

Russell Knox once called Potter the most talented player he ever played with. The irony is that Potter is not a grinder that hits a lot of balls. “I have never been a hard worker,” he said in his closing news conference at Pebble Beach. “I mean I’m probably better than what I think I am. I’ve got to figure out how to keep that focus on trying to get better instead of just being where I’m at.”

Mickelson trending ahead of Genesis

At 47 years of age, Phil Mickelson got better with age during his first four stops of the California swing. He started with missed cut at the CareerBuilder Challenge. He shot 76-74 on the weekend at the Farmers Insurance Open to drop from T-9 to T-45. At the Waste Management Phoenix Open, he closed with three scores in the sixties to finish T-5. And at AT&T, he birdied 14, 16 and 17o n Sunday to shoot 67 and finish T-2.

Now he heads to his fifth-straight tournament at the Genesis Open, where he hopes to put it all together and win for the first time since the 2013 Open Championship. “That’s where Riviera comes in,” he said. “I can’t wait to get started.” 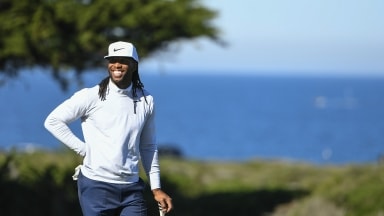 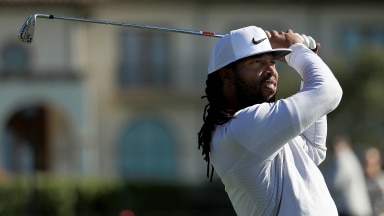 Good to be Larry: Fitzgerald plays with Tiger

Fresh off a Pebble Beach win and a spot in the Seminole Pro-Member alongside Jon Rahm, NFL star Larry Fitzgerald teed it up this week alongside Tiger Woods.