Going from the Omega Dubai Desert Classic to the Avantha Masters in New Delhi was certainly a change in pace for the European Tour.

Dubai had the top three players in the world; Delhi had just two of the world’s top 100. Rome wasn’t built in a day, and the Indians have large aspirations for the now Olympic sport.

Golf is the fastest growing game in this cricket-loving nation, and over the next five years the sponsors along with the Professional Golf Tour of India – the chairman of whom is the same person – wish to make the Avantha Masters one of the top events on the tour. Those are lofty heights, which will require a fat check book, some persuasive meetings with agents and a change of date.

Even with the luxury of a Global Express, Delhi-Tucson isn’t an appetizing trip, especially with only a two-day turn around, but you shouldn’t write them off. After all, who would have thought the Omega Dubai Desert Classic would be what it is today when the tour first visited in 1989?

The tour made its first stop in India three years ago, the Asian Tour makes regular visits, and the PGTI has over 20 tournaments on its own calendar. The strength of professional golf is growing so much that ISM, Chubby Chandler’s blooming management company, has just opened an office in the country to keep closer ties to a stable of local players.

On Sunday one of them, SSP Chowrasia, won on home soil for his second European Tour victory – a triumph which moved him just outside of the world’s top 250. He’ll no doubt have hopes of one day playing in this week’s WGC-Accenture Matchplay.

This year no Indian player is in the field, but it won’t be long before the Indian flag is flying high in Marana, Ariz.

Yani Tseng’s performance last week at the Honda LPGA Thailand must have sent a few chills down a few famous female golfers' spines.

The record for 2011 stands at four played, four won. This week the tour moves to the HSBC Women’s Champions in Singapore, where it seems the only thing that could stop her would be a flaring-up of the tendonitis that’s blighted her career. But not even that stopped her at last year’s Ricoh Women’s British Open when she secretly played through intense pain for a wire-to-wire win.

Elsewhere in the women’s game, the Australians may have a new star for the future.

On Sunday, 22-year-old Kristie Smith earned her first victory on the Ladies European Tour at the Pegasus New Zealand Women’s Open. Smith, whose father Wayne was a touring professional, followed her dad into the paid ranks in 2008. She spent a few years on the LPGA Futures Tour, where family friend Ian Baker-Finch provided a home away from home and some expert advice which led to a win last year in the tour’s Daytona Beach event. Smith then switched to concentrate on the LET where she finished 25th on the Henderson Money List in 2010.

And finally, Solheim Cup player Nicole Castrale returned to the LPGA in Thailand last week having missed most of last year with a shoulder injury which resulted in surgery over the summer and a lengthy rehab. Castrale finished tied 57th, improving her score each of the first three rounds but struggling to a birdie-less 76 on Sunday. 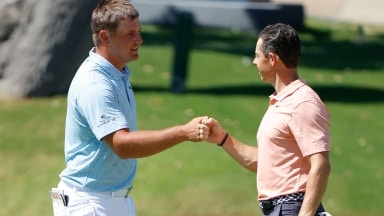