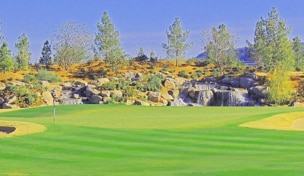 Getty Images
PEBBLE BEACH, CA - FEBRUARY 16: Dustin Johnson poses with the trophy on th e18th green at Pebble Beach Golf Links after cancellation of the final round of the the AT&T Pebble Beach National Pro-Am on February 16, 2009 in Pebble Beach, California. (Photo by Stephen Dunn/Getty Images)  -

TUCSON, Ariz. -- The new Sewailo Golf Club is a championship test with a unique point of view -- one that, perhaps, could only be understood by a Native American who grew up so poor on the west side of Albuquerque that he once bought a pair of women's golf shoes in a yard sale so he could play golf in the summers.

Co-designed by former PGA Tour player-turned Golf Channel commentator Notah Begay III with veteran architect Ty Butler, Sewailo Golf Club became the first new course to open in the Tucson area since The Golf Club at Dove Mountain five years ago. And while Dove Mountain's architect, Jack Nicklaus, might have a little more experience in almost every imaginable way when it comes to golf, Begay has something Nicklaus or the rest of the architects can never understand – perspective.

It's just one aspect that makes Sewailo, which opened on Thursday, so unique.

Begay, a three-sport star in high school, earned a golf scholarship to Stanford, where he not only earned his degree in economics, but was part of a group that went from unranked before he got there to NCAA champion in 1994. And, oh by the way, he also had a pretty famous roommate named Tiger Woods, whom Begay affectionately nicknamed "Urkel" because of the Coke-bottle glasses he wore in college when he didn't have his contacts in.

But Begay has never forgotten his roots or the heritage of his people. As a Native American – Begay is half Navajo and a quarter San Felipe and Isleta – he is passionate about helping his people. His foundation, NB3F, fights childhood obesity and diabetes in the Native American community while promoting fitness and wellness. And as a Native American, he certainly had a deep appreciation for what the Pascua Yaqui Tribe, which also owns accompanying Casino del Sol resort, has been through and wanted to accomplish. In fact, you might say Begay and his NB3 Consulting Company, served as the driving force behind the project. This is Begay's third course; the other two being Sequoyah National in Cherokee, N.C., and Firekeeper Golf Club in Topeka, Kansas.

Begay's vision is evident throughout.

Sewailo is as much about the story it tries to tell as it is about the 7,400-yard championship layout. The Yaquis, who migrated from Mexico to Arizona more than 2,500 years ago, are said to have come from the "flower land," or Sewailo as it's known in their language. The course illustrates that history.

It starts off lush and green with lakes that evolve into streams. In the second phase of the course, the desert re-emerges, then later, the streams, lakes, and flowers return, just as they did for the tribe after its arrival here, culminating with waterfalls behind the 18th green.

To create the look, Landscapes Unlimited, which has worked with Begay on his previous projects, not only moved thousands of cubic yards of dirt to shape the course and dig out the lakes, but they transplanted more than 30,000 native shrubs and trees. Among the plants are wildflowers, including brittlebush, a desert shrub in the sunflower family. It blooms yellow in the early spring. In a year or two, as the native areas fill in, the course could very well be one of the most colorful in the region.

As for the course, well, it's a pretty good test. Just announced on Wednesday, the Troon Golf-managed facility, which will soon include a clubhouse and learning center, will serve as the home course of the University of Arizona's men's and women's golf teams and it's not out of the realm of possibility that it lands a Champions or LPGA tour event in the near future.

From the tips, it's all you can handle, but with five sets of tees, the most forward of which lose the forced carries, it's very playable. Wide open, it is, of course, susceptible to the desert winds, and water on 10 holes certainly provide plenty of trouble.

There are also about 65 bunkers on the course, but because they are so large and deep, it seems more like 165. The 14 acres of lakes and one mile of creeks, besides  helping to tell the Yaquis' story, are a key part of the strategy.

"There's a huge amount of fairway, but if you want to improve your chances of scoring, you have to take on the hazards," Begay said.

The greens are large, too, especially the first and the eighth, which combine for 23,900 square feet. Begay drew inspiration from his favorite course – the Old Course at St. Andrews – for that one. Hit it long, and you could be faced with a putt of 150 feet or more.

It's also wise to consult the GPS maps on the golf carts when playing this course for the first time. Landing areas beyond bunkers and short of water hazards aren't always evident off the tee, so driver on every par 4 and par 5 aren't recommended.

As for the memorable holes, there are plenty of them, but Begay's favorite are the par-3 third and par-5 10th.

The third is short, just 150 yards from the back tee, but there's a lake in front of and on both sides of the green, creating an intimidating look akin the 17th at the TPC Sawgrass. Add a little wind and it becomes even scarier.

The 10th is just downright nasty. While Begay and Butler provided generous fairways, some drivable par 4s and birdie opportunities on a couple of other par 5s, they took away most of the golfer's options on the 10th.

It starts with a tee shot that plays around water. The fairway gets more narrow and the water comes more into play the more right you hit it off the tee. But the farther left you hit it, where the fairway is generous, the more difficult the second shot, which much clear a water hazard and work around or over some fairly large fairway bunkers.

Which is why it's the No. 1 handicap hole.

Green fees, which include cart and the club's outstanding range and short-game area, are opening at $99 during the week and $125 on weekends. Better rates may be available online, and Troon Golf is offering a special three-course package call the Tucson Golf Swing (TucsonGolfSwing.com). The package also includes the mostly private Gallery Golf Club and La Paloma Resort at $299 (Jan. 1-April 14), $199 (April 16-June1) and $139 (June 2-Sept. 1).