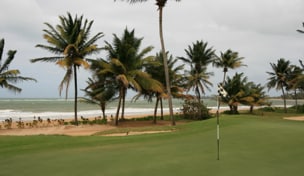 Getty Images
Zach Johnson poses with the trophy after a one-stroke victory at the BellSouth Classic at the TPC at Sugarloaf April 4, 2004 in Duluth, Georgia. (Photo by Scott Halleran/Getty Images)  -

RIO GRANDE, Puerto Rico – While the best players in the world are teeing it up at this week's WGC-Cadillac Championship on Doral's TPC Blue Monster Course in Miami, much of the rest of the PGA Tour is playing golf Puerto Rican style just a couple of hours south by plane.

A pretty decent field is teeing it up on the par-71, 7,500-yard Championship Course at Trump International Golf Club for the Puerto Rico Open, about 15 miles outside of San Juan. It's a roster that defending champion Derek Lamely and major winners Stewart Cink, Angel Cabrera and John Daly.

Presented by the Puerto Rico tourism department -- and endorsed by the territory's golf ambassador, Chi Chi Rodriguez -- the tournament serves several purposes, not the least of which is to promote travel to Puerto Rico and perhaps, more specifically, a Puerto Rican golf vacation.

The above mentioned Championship Course at Trump International, a striking paspalum layout designed by Tom Kite, is one of about two dozen golf courses in Puerto Rico. It may not sound like much, but the island really isn't that big, so it's not difficult to get from course to course, especially if you rent a car. It's also fairly easy to get to Puerto Rico, the hub of the Caribbean. From New York, it's only about four hours, you don't need a passport since Puerto Rico is a U.S. territory, and the currency is the U.S. dollar.

The island has several nice resorts, including the Gran Melia, where Trump International's two golf courses are. Most of the tour players have been staying here this week, and seem to be enjoying the low-key beachfront property, which recently underwent a renovation.

Bahia Beach Golf Course was designed by Robert Trent Jones Jr., whose passion for the 7,000-yard golf course, which served as a Monday qualifier for the PR Open, is evident. The greens complexes, the routing, the turf and the setting through the jungle and along the beach are all spot on. And while the rack rate is in the high 200s, the experience is unforgettable.