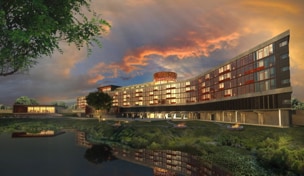 Getty Images
Graeme McDowell of Northern Ireland hits his tee shot on the second hole during the first round of the Northwestern Mutual World Challenge at Sherwood Country Club on December 5, 2013 in Thousand Oaks, California. (Photo by Stephen Dunn/Getty Images)
-

Two of Florida’s best golf resorts – one new, one old – will add new bling to the state’s expansive golf scene this winter.

Streamsong Resort, the hot new destination created by Mosaic deep in central Florida between Tampa Bay and Orlando, is scheduled to open its 216-room main lodge Jan. 17, 2014. Meanwhile, the rebranded Trump National Doral Miami remains open in the midst of a massive $250-million makeover, headlined by the modernization of the Blue Monster by Gil Hanse. Not to be overlooked, architectChris Wilczynski of Ann Arbor, Mich., will unveil new private designs in Sarasota and Naples. Here’s what’s coming on the horizon in the Sunshine State this winter:

"For us, great was not good enough," he said moments after cracking a joke about how hard it is to find such a remote place in Polk County south of Lakeland. “Our standard and our ability to attract (people) and to be worthy of your time, this venue needs to be exceptional.”

Streamsong will reach rarified air if the lodge can live up to the inspiring dune-laced courses.

The modern-to-futuristic feel of the clubhouse was applied to the new lodge as well. Floor-to-ceiling glass walls accentuate the luxurious rooms, which range in size from 530 to 1,167 square feet.

Guided bass fishing tours, sporting clays, tennis courts, nature trails and a lakeside infinity pool will showcase the unique mined-out ecosystem that surrounds the resort. A grotto-style spa, home to seven experiential pools, will bring the healing powers of the outdoors in. Four restaurants – from casual to the premier steakhouse in the clubhouse – will feed guests. Interstate Hotels and Resorts is managing the resort component of the resort while Kemper Sports will handle the golf side. For such a rustic retreat, Streamsong's offerings will be quite opulent.

Opulent doesn’t begin to describe the new Doral. Donald Trump purchased the worn, 800-acre resort out of bankruptcy in June 2012 – ironically the year of its 50th anniversary.

Eric Trump, the Executive Vice President of Development and Acquisitions for The Trump Organization, said returning guests won’t recognize the place. Just about everything is being reimagined - the spa, the main lobby, the 693 guestrooms and 48 luxury suites and villas, the fitness center, the Champions Bar & Grill, the pool complex and several ballrooms. The new BLT Prime steakhouse will open in February.

The main clubhouse was stripped to its steel frame. A new ballroom and terrace are being constructed atop the building overlooking the Blue Monster. "We have built it from the ground up. The transformation is incredible," Eric Trump said.

Hanse’s work altered almost every hole. Three of them – the eighth, ninth and 10th – have shifted to make room for the new lighted driving range, which tripled in size and will house a new TaylorMade Performance Lab. Doral went from six holes splashed with water hazards to 14, notably on the par-3 15th hole and the potentially drivable par-4 16th hole. "It’s longer. There is more water on the course. That usually translates to a harder course,” Eric Trump said. “This is a world-class championship course."

Wilczynski estimates his Naples course is about 60 percent complete and should be fully ready to play in March.