Four Seasons Resort Dallas has bright future, with or without the PGA Tour 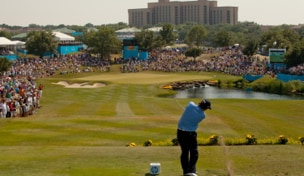 Getty Images
A fan with an Uncle Sam hat watches Tiger Woods, left, and Morgan Hoffmann, center, walk up to the first green during the third round of the Greenbrier Classic golf tournament at the Greenbrier Resort in White Sulphur Springs, W.Va., Saturday, July 4, 2015. Rain caused delays in play. (AP Photo/Steve Helber)  -

The HP Byron Nelson is already getting a new title sponsor and probably a new venue. Now, the stage where the tournament has been conducted for the last 30 years – The Four Seasons Resort and Club Dallas at Las Colinas -- has a new owner and a new future.

The resort's contract with the PGA Tour will run out in 2018. The tournament's new title sponsor, AT&T, is interested in moving the Nelson to a new Ben Crenshaw-Bill Coore design being built in south Dallas, Trinity Forest.

It will mark the end of an era for the 431-room Four Seasons Dallas, no doubt one of the most celebrated golf resorts in Texas, but it will also be a new beginning. Soon, perhaps, to be free from the responsibility of playing host to a PGA Tour event, the resort will enter a new phase, much like San Antonio's Westin La Cantera, which hosted the Valero Texas Open from 1995-2009, and still plays off that history.

Located between Dallas and Fort Worth in the upscale business community of Las Colinas in Irving, the Nelson tournament certainly had a good run. Year after year, it was among the top tournaments in rasing money for charity and up until recent years, drew pretty good fields. Much of that was due to the hard work of the Dallas Salesmanship Club, which ran the event, but even more significant was the ever presence of its host, Byron Nelson. He was a fixture at the Four Seasons – out there most every day he could be -- and perhaps the most personable and nicest person I've ever met.

One of the my fondest memories as a golf writer came in the late '90s when I spent the better part of day with Mr. Nelson, having lunch, talking golf swing, discussing his relationship with Ben Hogan and reminiscing about his record breaking streak in 1945 when he won 18 times, including 11 in a row. Over lunch, it seemed he wanted to know as much about me as I did about him. I often had to steer the conversation back to the topic people cared about.

The following January, I found Nelson at the PGA Merchandise Show in Orlando signing hundreds of autographs at the Cleveland Golf booth. I wanted to say hi, but I didn't interrupt. After a few minutes, he looked up and asked me how I was doing, referring to me by name. I had only met him the one prior time before that. Incredible.

Everybody felt that way about Lord Byron, including Tiger Woods, who won there in 1997, but never came back after he missed the cut in 2005, his ninth appearance. Nelson died the following year, and the field suffered. The allegiance from tour players, to some degree, was no longer there. Now the golf course, a Jay Morrish design that I've always enjoyed playing (We played the Texas Golf Writers Championship there several times) came under more scrutiny. The greens were deteriorating and the original owners, USAA, had gotten out when the getting was good, having sold to commercial real estate investor BentleyForbes in September 2006 for a reported $200 million right after Nelson's death. For BentleyForbes, the timing couldn't have been any worse.

With Nelson no longer around and the tournament fields growing weaker, disapproval of the golf course, which is sort of shoe-horned in between businesses and condos that surround the property, grew.

In 2007, D.A. Weibring's group was brought in to renovate the TPC Course, and while they did a great job, many of the changes weren't that noticeable with the exception of the 18th hole, which was completely blown up and redone. BentleyForbes also added a number of luxury villas around the course for VIPs and tournament sponsors. It just wasn't enough.

To make matters, worse, in 2008, the U.S. economy tanked after one of the country's worst financial crises in modern history. Soon after, in 2009, the property went into foreclosure after BentleyForbes filed for bankruptcy.

Through it all, however, the Four Seasons Company has always staffed and operated the resort, which included professionals and managers who have been there for years. So there was always continuity and consistency in products and services.

And while the par 70 TPC Course has its share of critics, it's not the only course there. For many years during the Nelson, the private Cottonwood Valley Course, which is open to resort guests, was also used during the first two rounds. With its Texas-shaped green on the first hole, great conditioning and interesting Jay Morrish and Robert Trent Jones Jr. layout, it's as much fun to play as the TPC.

Blackstone is expected to update the facililities throughout the resort. Add to that a world-class spa, great dining, luxurious rooms, golf academy and a large athletic club that includes tennis, racquetball, basketball and other activities, and the Four Seasons is still one of the best resort experiences in Texas.

With or without the PGA Tour.