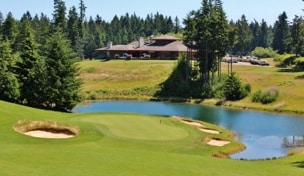 Getty Images
Justin Rose of England celebrates after holing a bunker shot on the 16th hole during the third round of the 2015 Masters Tournament at Augusta National Golf Club on April 11, 2015 in Augusta, Georgia.  -

The Seattle Seahawks and Denver Broncos will slug it out in New Jersey Sunday night in the Super Bowl, so what better time than now to put the cities' golf scenes against one another?

Matt Ginella and Gary Williams discussed just that on Morning Drive. Both the Seattle and Denver areas have two of the west's most reputable golf histories, complete with major championship venues. The Seattle area features private Sahalee C.C., host of the PGA Championship, as well as Chambers Bay in nearby Tacoma, which will welcome the U.S. Open in 2015. Meanwhile, Cherry Hills in Denver was the site of Arnold Palmer's only U.S. Open victory, and Colorado Golf Club hosted last year's Solheim Cup.

Take a look at where Ginella says are the best courses in each city, as well as what the best pick is for affordable golf:

Ginella on golf in Seattle

Ginella on golf in Denver

While Denver has a storied roster of private clubs, including Castle Pines and Cherry Hills, his pick for best accessible golf is Commonground Golf Club in Aurora.

So which city has the better golf scene? Golf Channel asked fans to chime in themselves, and the results are overwhelmingly in favor of Denver, 63% to 37%.