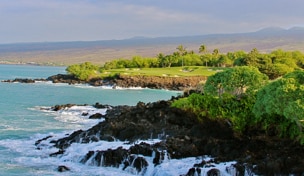 Getty Images
Sergio Garcia of Spain hits out of a bunker during a practice round ahead of the 144th Open Championship at The Old Course on July 15, 2015 in St Andrews, Scotland. (Photo by Streeter Lecka/Getty Images)  -

KOHALA COAST, Hawai’i - Mother Nature got creative with her Crayolas when she colored the golf courses of Hawai’i Island.

Besides the usual hues of greens, browns and white found on most courses, the black backdrop of the centuries old lava rock and the bright aqua of the ocean create a kaleidoscope of natural beauty.

"The color contrast of the black lava, white sand and ocean blue on our courses is spectacular,” says Josh Silliman, the Director of Golf at Mauna Kea Resort. “There’s nothing like it. It’s very appealing."

Hawai’i Island, called the "Big Island" by mainlanders, celebrates 50 years of lava golf this year. Five decades ago in December of 1964, Golf’s holy trinity at the time – Jack Nicklaus, Arnold Palmer and Gary Player – played together at the grand opening of the Mauna Kea Golf Course, a Robert Trent Jones Sr. design that signaled the birth of one of the world’s best oceanfront golf destinations.

Mauna Kea, ranked 31st among “America’s 100 Greatest Public Courses” by Golf Digest in 2013-14, has been joined by a handful of sought-after resort courses along the dry, desert-like Kona-Kohala Coast. Iconic ocean holes – like no. 3 at Mauna Kea, no. 15 on the Francis H. I'i Brown South Course at Mauna Lani Resort and no. 17 on the Jack Nicklaus course at the Hualālai Golf Club – introduce players to the salt spray, and if they’re lucky, a whale breaching in their backswings. The luxuries of Maui and the jungles of Kauai tend hog the spotlight, and yet, this spectacular stretch of shoreline might be Hawaii’s purest golf paradise. It rains less than 10 inches annually, a virtual guarantee for those chasing good weather.

"The Big Island, to me, is the best kept secret in Hawaii, not just in terms of golf, but also the landscape,” says John Sanford, a Florida-based golf course architect who recently completed work at the Kona Country Club. "If you travel around the island, it is such a diverse landscape, especially with the volcanoes. It is my favorite island without a doubt."

Exciting excursions - I experienced kayaking and snorkeling with Kona Boys, ziplining with KapohoKine Adventures out of Hilo, whale-watching with Hawaii Ocean Sports and hiking in Hawaii Volcanoes National Park while staying at the cool Kilauea Lodge - will take any Big Island vacation to a whole new level.

Golf on the Big Island of Hawaii

Vegetation is abundant on the The Kings Course at Waikoloa Beach Resort. (Jason Deegan/GolfAdvisor)

The first resort development you'll encounter driving north from Kona International Airport on Highway 19 is the celebrated Four Seasons Resort Hualalai at historic Ka'upulehu. This property sells luxury and a sense of community to go along with two 18-hole golf courses. Resort guests and members can play the Nicklaus Course, which hosts the Mitsubishi Electric Championship at Hualalai on the Champions Tour each January. The layout has some of the island's widest fairways and flattest greens before unveling a trio of finishing holes playing along the surf. Hualalai's Weiskopf Course, meanwhile, is only available to members.

Up the road is Waikoloa Beach Resort, a mecca of shops, restaurants, a Hilton, the Waikoloa Beach Marriott Resort & Spa where I stayed and courses designed by Robert Trent Jones Jr. and Tom Weiskopf/Jay Morrish. The 533-room Marriott sits on 15 acres facing the Anaeho'omalu Bay and the intriguing ancient fish ponds near its narrow beach.

I found the Kings’ course to be a solid track with a couple nice Weiskopf-inspired short par 4s, although I wish I had played the RTJ Jr.’s Beach course simply for the ocean view on no. 7.

Thankfully, there’s ocean golf galore at the Mauni Lani Resort. The Francis H. I'i Brown South and North Courses at Mauna Lani could be mistaken for twins with opposing personalities. The South course’s fairways are so friendly that I’ve heard golfers say they lack definition. The same can’t be said of the North course, which roams inland through an older lava flow and a confining Kiawe forest. While it lacks the magical ocean holes of the South, the North course is favored by golfers who want a challenge.

"Architecturally, they are night and day," says Colin Pears, a golfer visiting from Reno, Nev., who favors the North.

Stay and Play on the Big Island

Both the nearby Mauna Lani Bay Hotel & Bungalows where I stayed and the Fairmont Orchid, Hawaii, are palaces right on the beach. Palm trees, jungle plants and ponds stocked with sharks, turtles and other sea creatures impress at the Mauna Lani Bay Hotel. Private lanais make all 343 rooms feel bigger. Mauna Lani's private oceanfront bungalows were completely renovated and  all the guestrooms and suites were refreshed in 2013, along with the pool. A new oceanfront hottub added this month provides a perfect place to lounge at sunset. The Bay Terrace restaurant offers a killer breakfast buffet at sunrise. For dinner, go for the Kona lobster and delicate braised short rib at the Brown’s Beach House Restaurant at the Fairmont.

Mauna Kea, just up the road, still looks great thanks to a renovation by Rees Jones in 2008. Its sister course, the Hapuna Golf Course by Arnold Palmer and Ed Seay, delivered the week’s biggest surprise. This often-overlooked, less-expensive round offers plenty of fun. It sits high in the hills above the Hapuna Beach Prince Hotel with some great panoramic views and improved turf conditions.

The 350-room Hapuna Beach Prince Hotel, built in 1994, and the elegant 252-room Mauna Kea Beach Hotel underwent room renovations in 2013 and other enhancements that have both properties sparkling. Mauna Kea, developed by Laurance S. Rockefeller in 1965, showcases the Kauna‘oa Beach, a breathtaking white-sand cove that ranks as the island’s best beach. Dinner at Manta is a splurge worth experiencing.

Construction related to golf continues along the coast. The Kona Country Club should open its revitalized Ocean Course this summer, according to Sanford, with greens rebuilt to their original size, refurbished bunkers, more level fairways, new cart paths and a modern irrigation system. Sanford said a similar renovation will occur on the Mountain course once the Ocean opens.

Last year’s May opening of Kohanaiki, a seaside Rees Jones design just south of the airport, enhances an already impressive array of exclusive private clubs on the island. Limited tee times on Mondays are available for locals with a valid Hawaiian license willing to shell out $275 for a tee time. Construction on a 62,000-square-foot clubhouse will begin in March.

Kohanaiki is a new, exclusive addition to the courses on the Big Island's Kona coast. (Jason Deegan/GolfAdvisor) 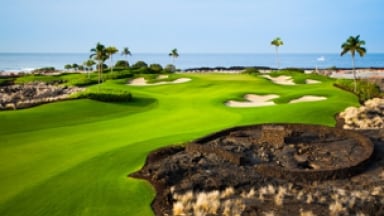 Despite finishing construction in 2008, it took until May of 2013 for luxurious Kohanaiki to open its Rees Jones-designed golf course. Jason Deegan has the scoop on the island's newest golf course. 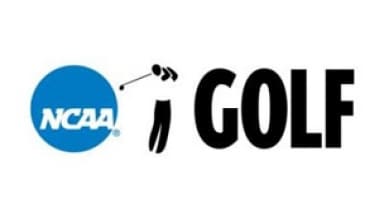 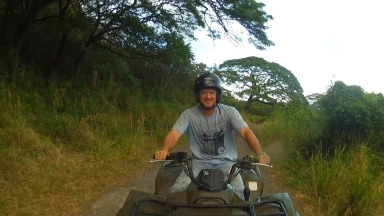 Matt Ginella checks in from Oahu's famed North Shore, where he shares some of his favorite activities on the island, including surfing with Kelly Tilghman.