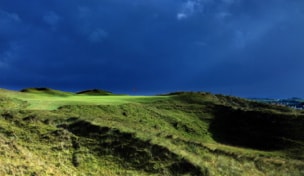 Getty Images
The rumors had been swirling for months, but in March Tiger Woods and Lindsey Vonn made it official by announcing they were dating on their respective Facebook pages, complete with glamour shots of the happy couple. Vonn was spotted following Woods at several events this year, while Woods flew to France to watch Vonn prepare for the Winter Olympics. (Getty)  -

When Northern Ireland's Royal Portrush hosted the Irish Open in 2012, much of the talk was about whether bigger events were in the storied links' future. After all, it's rated one of the top golf courses in the world by just about every major panel, and is the only course on the Emerald Isle to have hosted an Open Championship (albeit way back in 1951).

While the R & A has kept a tight lid on whether any new courses will be added to the current rota (they've also reportedly been surveying Royal Porthcawl in Wales), Ted Bishop, president of the PGA of America, suggests Royal Portrush would be more than worthy of hosting a PGA Championship should the event be taken overseas:

My visit to the Irish Open in 2012 revealed that Northern Ireland is hungry for big sporting events and the town of Portrush seemed to be more than logistically capable of handling the 15-20,000 daily spectators - if not more. The course, while set up to be scorable by the European Tour in 2012, had players gushing about the links and how it was certainly worthy of a bigger stage.

But perhaps the PGA of America will beat the R & A to it.