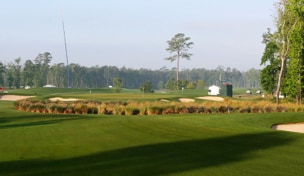 Next year's Shell Houston Open will be staged at the Golf Club of Houston. No that's not a new club in the Houston area, it's simply the new name of the former 36-hole Redstone Golf Club, which was purchased by Escalante Golf from The Redstone Cos. nearly nine months ago.

According to the deal, Escalante, which is based in Ft. Worth, Texas, had nine months to come up with a new name. After deliberating for the past two months on names that reflected Houston's heritage, industry and various animals and birds, senior officials settled on one that reflected the city and the fact that the club is all about golf.

"We selected the name 'Golf Club of Houston' as it conveys precisely what it is — a pure golf experience that focuses on golf at every level from beginner programs at The First Tee of Greater Houston to hosting one of the premier events on the PGA Tour," said David McDonald, president of the Escalante in a prepared statement.

Dave Matheson, who is one of the company's four partners, said the company unveiled the new name to its members on Thursday night before conducting a formal press conference on Friday. He said that members seemed to largely support the new name of the 36-hole club, which has played host to the PGA Tour event since 2002.

"At the end of the day, we're not inventing fire or sending a man to the moon," said Matheson, VP of corporate communications and marketing. "We're just changing the name of the place."

The purchase agreement also requires Escalante to change the name of the Houstonian Golf & Country Club because the Redstone Cos. still owns the Houstonian Hotel, Spa and Conference Center, which was affiliated with the golf course.

As of Friday, the company website already reflected the name change, and the golf shop at Redstone was already carrying its first shipment of logoed apparel and merchandise. And while the logo reflects the new name, it did retain the arrowhead in the old Redstone logo.

Besides the new name and logo, everything else remains the same at Redstone Golf Club. The Member Course, which hosted the tournament the first four years until the Tournament Course opened in 2005, is still private. Designed by Rees Jones and David Toms, the Tournament Course is still open to the public. Regarded as one of the best conditioned courses on tour, the course hosts the SHO the week before the Masters, April 3-6.