From Czech to Hawaii: Mike Bailey's best of 2013 golf travels 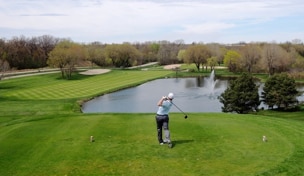 Getty Images
Ryan Palmer of the United States plays his second shot to the 10th hole during the second round of the 2014 Alfred Dunhill Links Championship at the Kingsbarns Golf Links on October 3, 2014 in Kingsbarns, Scotland. (Photo by Ross Kinnaird/Getty Images)  -

Thirteen has always been my lucky number. I was born on that day, my favorite quarterback wore No. 13, and now, I can look back on the year 2013 with great fondness.

Yes, my previous five years as a travel golf journalist weren't too bad either, but 2013 stands above most. My travels took me from Hawaii to central Europe and many points in between. Most of the golf was stellar, to be sure, but the people, sites, food and experiences along the way were as fascinating as the risk-reward holes. Here's a look at some of the superlatives from last year:

Chicagoans and vacationers from Milwaukee certainly know of the Lake Geneva, Wisc., area, but much of the rest of the country is in the dark when it comes to this wonderful destination just north of Chicago. Built around the pristine waters of Geneva Lake, there are 22 golf courses in the area and several top-notch resorts, including Grand Geneva, which used to be a Playboy resort. The two courses at Grand Geneva – the Brute and the Highlands – are two of the most fun golf courses I played all year, but there were so many other good ones, too, like the three at Geneva National, Abbey Springs in Fontana and Hawk’s View Golf Club, which not only has a terrific 18-hole championship course, but a really enjoyable par 3 track as well.

This was my fourth trip to Ireland to play golf, but my first time playing golf in the Dublin area. I wasn't disappointed. First off, Dublin is a great city to visit. The pubs, the restaurants, the architecture and Temple Bar district (think the French Quarter in New Orleans during Mardi Gras) are as good as it gets, but the golf was surprisingly good – even the parkland golf at courses like Headfort and Carton House. The Montgomerie Course was the setting for The Irish Open and I was lucky enough to play in the pro-am. Our pro was Francesco Molinari, who couldn't have nicer, and we started on the first hole, where there was a surprisingly sizeable gallery for pro-am. I was the first amateur in my group to tee off and somehow I managed to hit one right down the middle. It was a thrilling start, to say the least, and one of the few times anyone ever clapped for one of my shots. Golf is golf, but the culture here was a little different. The Irish fans were knowledgeable and very supportive, no matter how bad of a shot you hit.

Longest trip: Houston to New England and back

Before 2013, my longest golf road trip was two weeks, but last summer, we decided to try something a little different. Starting from Houston, we drove to New England, then toward the Midwest and back home (Read: Bailey's epic summer road trip). The trip took 27 days, covering more than 5,000 miles and 17 states. I didn't play golf every day since there was some long days of driving involved, but there was plenty of it and a few side trips along the way. The hardest course I played was the Pete Dye Course at the French Lick Resort, which will host the 2015 Senior PGA Championship. Ironically, the best course on the trip was right next door, the wonderful Donald Ross Course at French Lick. The most fun course might have been an 18-hole executive course in Plymouth, Mass., Squirrel Run Golf & Country Club. Not too far away, we had some of the freshest and most economically priced lobster ever, caught fresh right out of the Atlantic.

Other highlights included barbecue in Paducah, Ky., Graceland in Memphis, the Gil Hanse-designed Inniscrone Golf Club near Philadelphia and a visit to the Jack Nicklaus Museum in Columbus, Ohio.

Last spring marked my fifth trip to Hawaii, but my first to Maui. Of all the islands, with the exception of Oahu, Maui is probably the most commercial, but that might be because it's arguably the most beautiful, too. And the golf courses take advantage of the scenery. We paired this trip with nearby Lanai, taking the ferry over to stay at the Four Seasons and play the two courses there. (No shortage of views from Lanai either.) All the golf on Maui was exceptional, but there were two that really stood out for me. The first might be a little under the radar – King Kamehameha Golf Club, a private club that allows limited outside play. Laid out along the side of the West Maui Mountains, with plenty of elevation change, you also get panoramic views of the Pacific Ocean as well. Still, for me, the king of spectacular is the Plantation Course at Kapalua. Even if you don't play the course, go get breakfast on a clear day at the Plantation Clubhouse and eat outside on the veranda. There's nothing better.

About 15,000 or 20,000 miles from Maui, in central Europe, lies the Czech Republic. While it doesn't have the golf reputation Hawaii enjoys, the golf scene there is probably a lot better than you think, and it's rapidly growing. And the bonus on our fall golf trip to the Czech Republic was a visit to the capital city of Prague, which is one of the great architectural and cultural cities of the world. But not far away are a few really nice golf resorts. One of them is Konopiste Golf Resort, situated in an old chateau about 45 minutes away. It has two championship golf courses -- D’Este and Radecky – which take advantage of the incredibly beautiful hilly countryside and were in beautiful shape. The golf culture there is a little different, though. There's not much interaction with the pro, who generally just gives a few lessons, and the local golfers seem a lot more serious about the game than we do (they love to play in tournaments, for example). In the end, though, it's still golf, trying to get the ball into the hole in as few strokes as possible, and that holds true whether you're playing at the brand new Loreta Golf Club Pysely in the Czech Republic or Pebble Beach.