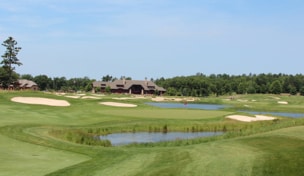 Thompson, a trucking company magnate from Huntsville, Ark., wasn’t just playing golf at the magnificent Tom Weiskopf design he bought in 2011. He drove up to almost every customer, asking how their day was going, where they were from and what they wanted done better next time they visited.

Thompson’s hands-on approach aims to protect his investment. He’s spent more than $2 million on the property, including the addition of the $1.5 million luxury Lake AuSable Lodge this spring.

Forest Dunes has always been northern Michigan’s enigma. No other course in the state has been more lauded by critics creating those coveted “best of” lists. Yet the 7,116-yard layout has chewed through course owners and operators like rabbits run amok in a garden.

Thompson seems to have the club headed in the right direction for the first time since it opened in 2002.  General Manager Todd Campbell said Forest Dunes sold 15 real estate transactions last year, compared with none the previous seven years combined.

Maveus, a former assistant golf professional hired away from Pebble Beach Golf Links, is another key piece in the evolution of Forest Dunes. Some would argue that leaving the iconic ocean cliffs of the Monterey Peninsula for the backwoods of northern Michigan wouldn’t be a wise career move, but that’s not entirely true. Pebble Beach sits atop Golf Digest’s rankings of America’s “Top 100 Public Golf Courses”, but Forest Dunes isn’t far behind at no. 23. Golfers love how many risk-reward scenarios Weiskopf built into the round, especially the drivable par-4 at no. 17 that plays a mere 278 yards from the blues. The sandy waste areas of the back nine looks like the Sandhills of North Carolina or Nebraska.

“It is such a special property with a phenomenal golf course with so much potential,” said Maveus, 38, who has roots in the Midwest.

The 14-room lodge features standard rooms on the first floor (some are adjoining) and two spacious second-floor suites with kitchens and a fireplace. Its décor reflects the same Adirondack architecture of the spectacular golf clubhouse, using hardwoods, cedar shake siding and a stone exterior. The new lodge at Forest Dunes.

Forest Dunes has gotten into the wedding business as well. The first wedding of the summer sold out the lodge, forcing Thompson to stay somewhere else on Saturday night. “I built the lodge too small,” he said with a laugh.

There’s plenty of room for development, either more lodging or homes. The 1,500-acre property currently has 152 deeded lots inside the scenic Huron National Forest.

Thompson’s best move to date has been retaining Superintendent Jim Bluck, who keeps the course in immaculate shape year-round.

“These are the purest public course greens you’ll ever play,” said Ryan Alsup of Birmingham, Mich., after a recent round.

Alsup and friend Ken Bortnick of Bloomfield Hills said they almost flew to Bandon Dunes Golf Resort in Oregon before deciding instead on Forest Dunes closer to home. Playing Forest Dunes over Bandon Dunes? Working at Forest Dunes over Pebble Beach? There were times during this club’s checkered past when none of this seemed possible. It’s reality now.

“I’m appreciative that we have this in our backyard. It’s overlooked. It is such a treasure,” Bortnick said. 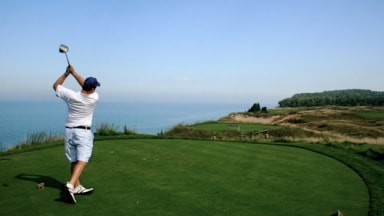 What is USA's golf capital?

The United States is full of golf hotspots, but only a handful can make a case as the country's golf capital. Jason Deegan shares six destinations' arguments for the title. 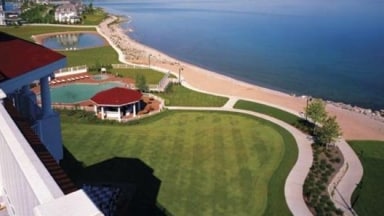 Looking to get away from it all? Look no further than The Inn at Bay Harbor and Bay Harbor Golf Club. The Inn at Bay Harbor feels like olden days America with modern amenities, while the 27 golf holes designed by Arthur Hills (especially the Links/Quarry combination) are reminiscent of formidable Irish seaside courses, David R. Holland writes.