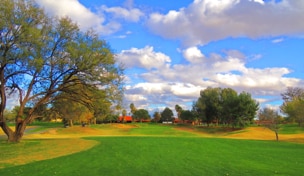 Getty Images
Bubba Watson of the United States walks with his son Caleb off the 18th green after winning the 2014 Masters Tournament by a three-stroke margin at Augusta National Golf Club on April 13, 2014 in Augusta, Georgia. (Photo by Harry How/Getty Images)  -

Tucson's five municipal golf courses have always had a pretty good reputation. They are generally in good condition, interesting and challenging. But the returns haven't always been what the city hoped for.

So Tucson is doing what many other cities have done recently: turn to a private management company. After entertaining bids from 16 different firms, the city hired Scottsdale-based OB Sports Golf Management to take over operations of the city's courses starting Feb. 1.

"We respect and appreciate the city’s rich history as a provider of exceptional golf to the everyday golfer," said C.A. Roberts, president and principal of OB Sports. "It’s a pleasure to help carry this tradition forward. We believe that our team can reach the goals set out by the city while also preserving the value and quality of play that so many golfers have enjoyed at these fine facilities over the years."

The decision to go with OB Sports made sense on a couple of different levels, according to Tucson City Manager Richard Miranda.

"We believe with their experience in the Arizona golf market and their approach to golf facility management, OB Sports can achieve the goals we share of enhancing the golf experience for those who play on the five Tucson City Golf courses and moving our golf operations toward financial stability," he said.

Significantly raising green fees probably won't be part of the plan. The courses should remain among the most affordable in Tucson, including the two at Randolph Park: the North Course and Dell Urich.

While it might not rival famous munis like San Diego's Torrey Pines or even Butterfield Trail in El Paso, Tex., Dell Urich is a popular choice among locals and visitors alike because of its strong Ken Kavanaugh design and generally good conditions. The North Course, which is actually more than 200 yards longer at 6,900 yards, is a nice contrast with Dell Urich's parkland layout.

The other three have their loyal following as well, especially Silverbell, a parkland/desert hybrid that many locals consider their favorite. Fred Enke, a desert course on the east side, and the Trini Alvarez El Rio Golf Course, which dates back to the 1930's and was the original site of the PGA's Tucson Open, round out the city offerings.