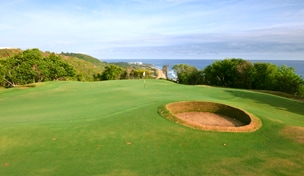 It's the thick of winter in the United States, so your mind may be wandering off, thinking about a golf escape in the sunny Caribbean. There are over 30 nations and countless ways to enjoy a golf vacation here. Writers Jason Deegan, Mike Bailey and Brandon Tucker have their own favorite golf courses.

No other Caribbean golf course interacts more intimately with the ocean than the Punta Espada Golf Club at Cap Cana.

Crashing waves actually almost forced my playing partner to back off his tee shot on the 17th hole. If you love seaside golf, the Dominican Republic is your place. The Teeth of the Dog by Pete Dye and Corales by Tom Fazio are two other oceanfront stunners, but Punta Espada in Punta Cana is my favorite of all the Caribbean courses I've played.

Say what you will about Jack Nicklaus as a designer, but the Golden Bear nailed Punta Espada. He routed eight holes directly along the ocean. It's good enough to test the best - the 7,396-yard course hosted the Champions Tour's Cap Cana Championship from 2008-10 – and playable enough to be enjoyed by the rest.

There are so many signature spots. The view from the elevated second tee reveals a gorgeous par 5 that runs to the shore. Its peninsula green button hooks right into a bay.

I still can't get over the fact that Nicklaus birdied the dramatic par-3 12th from the tips at the club's grand opening in 2008. The club's staff encourages everybody to attempt this epic shot, a 250-yard carry over the ocean to the green on the cliffs above. I was thrilled just to have made it across safely, even though my ball was never close to the green. It's a shot I'll always remember. Punta Espada is a place you'll never forget.

When it comes to views, a course that's still under the radar might be hard to beat. The Golf Links at Royal Isabela, perched high above the cliffs on the northwest coast of Puerto Rico, offers stunning views and an intriguing layout over 21 holes.

Yes, you heard right, 21 holes, because there are actually three optional holes, meaning you can change this course up from time to time to get a different experience.

Royal Isabela isn't your typical big-name designer resort course. It was actually designed by the owners, Puerto Rican tennis brothers Charlie and Stanley Pasarell. They got a little help from architect David Pfaff, whose resume includes being the associate architect with Pete Dye on Teeth of the Dog at Casa de Campo in the Dominican Republic. But really, as the Pasarells will tell you, this course was laid out by a higher authority.

This makes Royal Isabela akin to something you see on the coast of Scotland, naturally fitting the land. Signature holes? Take your pick; there are so many, but the 200-yard par-3 17th, that spans from a tee on the cliff over the deep blue surf and rocks, would probably suffice.

The greens complexes will catch you off guard as they follow the natural contours of the land, with natural false fronts and tricky reads. There are blind shots, plenty of native areas, and a double green for the 12th and 14th holes that overlook the ocean. And for good measure, the course can play to more than 7,600 yards to challenge the best players of the world.

Golfweek has Royal Isabela ranked as the 42nd best course in the Caribbean and Mexico. I haven't played all the courses ranked ahead of it, but I've played more than a dozen of them and can honestly say that few are as good as or better than Royal Isabela.

I've spent more time cruising around the Caribbean than playing golf. But among the handful of high-profile resort courses I've played, I'm most impressed with the Sandals Emerald Reef Golf Club on Great Exuma Island.

Compared to busier parts of the Bahamas and other islands in the Caribbean, Great Exuma is a secluded and quiet retreat with world class waters for scuba, snorkeling and boating. It's technically the Atlantic Ocean, not the Caribbean Sea, but the remarkable water clarity and color is as good as anywhere.

I generally favor courses with more elevation change, and other Caribbean islands have more of that than the flat, sandy Bahamas, but the Greg Norman-designed Emerald Reef has plenty of great holes regardless.

The front nine, while further inland, is still a great test. But it's the back nine that's the real treat: Six holes that tip-toe along clear, emerald waters, that steals the show. Waves crashing on rocks add to the nerves standing on the tee box.

With a championship-caliber design, I'm surprised its not higher-ranked in some Caribbean golf course polls, but that's probably because a lot of raters haven't made it down since Sandals took the course over the property and put some real work into it, clearing out native areas and widening playing corridors, giving it a clean, open look.

Sandals also built a traditional English pub onsite, where golf groups will surely spend most of their time.- and drinks are included at this all-inclusive resort, so bottoms up to one of the Caribbean's best golf experiences.