Punch Shots: Which destination is the home of American golf? 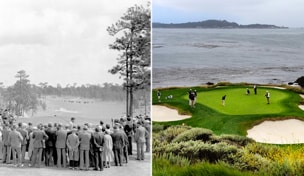 With the spotlight on California's Monterey Peninsula this week for the AT&T Pebble Beach National Pro-Am, we asked Brandon Tucker and Jason Deegan which destination is worthy of the label: the home of American golf?

To me, the Monterey Peninsula symbolizes the American dream. If you work hard enough and get a little lucky, this is the place we all would want to end up living.

Never been? Just take a ride along the 17-Mile Drive of the Monterey Peninsula. It’s the first glimpse at the magic of this special place. The shore along the Pacific Ocean is rugged and rocky in places -- sandy with dunes and unique plant life in others.

Mountain and desert golf look pretty and play beautifully, but nothing compares to the sights, sounds and smells of a golf paradise on the ocean. Nobody does that better than Pebble Beach Golf Links. Yes, playing Pebble Beach can be a bank-account buster, but the price tag ensures the once-in-a-lifetime experience on such a historic U.S. Open venue is a special occasion not to be taken lightly.

Pebble Beach isn’t the only seaside stunner here, just the most famous public one. The Links at Spanish Bay and Spyglass Hill -- even the Pacific Grove Golf Links, the “poor man’s Pebble Beach” -- showcase the same breathtaking coastline, as does the ultra-private Cypress Point. There are other great inland tracks, too, at resorts such as Quail Lodge and Carmel Valley Ranch. The Northern California Golf Association chose Poppy Hills Golf Course in Pebble Beach as its home base for one reason: It’s only logical to live, work and play in one of America’s true golf meccas.

We can’t all be millionaires in this world, but at least we can feel like one for a day teeing it up in this iconic American golf destination.

Brandon Tucker: The Village of Pinehurst and the Carolina Sandhills

Whales won't breach in your backswing, but the Village of Pinehurst and greater Carolina Sandhills have made for one of the most enriching places in America to play this grand game for more than a century.

This is mostly because Pinehurst represents the most direct link that the American game has to Scotland. The resort's founder, James Tufts, brought Scotsman Donald Ross to the resort in 1900 to serve as its first golf professional. Over the next five decades, not only would Ross have a heavy hand in the first four courses at the resort -- including the famed U.S. Open host Pinehurst No. 2 -- but also an estimated 400-plus golf courses throughout America.

Since the days of Ross, the Pinehurst Resort has swelled to eight courses, while the neighboring communities around the Carolina Sandhills have followed suit to produce one of the most golf-rich destinations in the world.

During his time in Pinehurst, Ross also designed neighboring courses Pine Needles and Mid Pines, while designs from modern architects have helped compliment the classics. Mike Strantz delivered a creative bombshell at Tobacco Road, while most recently Bill Coore & Ben Crenshaw laid out a throwback at Dormie Club.

But even with added development, the Village of Pinehurst, well off any major interstate artery, still bleeds the old Scottish game, whether you're chipping into the fireplace at the Pine Crest Inn or pouring through rare golf books at the Tufts Archives on a rainy morning.

Better yet, virtually every must-play club around the triangle of Pinehurst, Southern Pines and Aberdeen allow guests on their greens, just like nearly every Scottish links golf course. Did you hear that, Cypress Point? 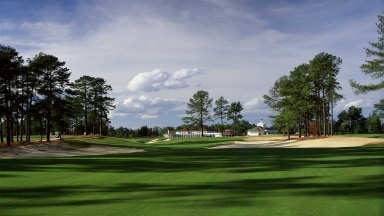 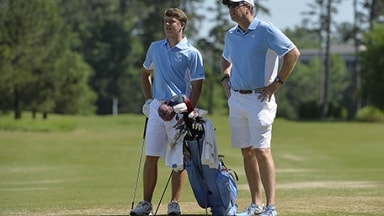