Royal County Down or Royal Portrush? 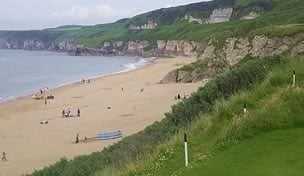 Getty Images
BANGKOK, THAILAND - JANUARY 09: European Team Captain Jose Maria Olazabal looks on during the foursomes on Day one of The Royal Trophy at the Amata Spring Country Club on January 9, 2009 in Bangkok, Thailand. (Photo by Ian Walton/Getty Images)  -

Jay Coffin and Rex Hoggard played two classic courses – Royal County Down and Royal Portrush – while in Northern Ireland. Now to debate. Which course did they prefer?

BELFAST, Northern Ireland – You can’t go wrong with either, but if you have to make a decision Royal Portrush gets the nod.

Royal County Down was great but would be much better the second time once you know the layout. We did not have that luxury on this trip. Royal Portrush was a complete joy to play the first time without knowing anything about it.

The par 3s are spectacular – the 210-yard 14th will get your heart thumping – the views of the town are a treat and the holes that run near the beach with a backdrop of a huge rock cliff are breathtaking. It’s tough, but playable. You’re penalized severely for missing the fairway on many links courses. At Portrush, you still want to find the fairway, but if you don’t, you have a fighting chance of finding it and advancing it.

Ambiance goes a long way with me. Royal County Down has it, but Royal Portrush has it in spades. After a nearly 90-minute drive from Belfast you’re just hoping the course will live up to expectations. Then, you come to the end of the B62, look down over the links and immediately know you’re in for a treat.

BELFAST, Northern Ireland – Royal County Down or Royal Portrush. Blondes or brunettes. Convertibles or fast backs. No one wins these esoteric debates, but we love trying.

Royal County Down, all towering and twisting 7,204 yards of it, is the gem of the Northern Irish coast, but only because golf course architecture is a multiple-choice exam with no incorrect answers. There’s a reason Baskin-Robbins has 31 flavors.

Royal County Down is an acquired taste, but only after multiple visits and only when one embraces its blind beauty. For all of Portrush’s majestic simplicity it is Royal County Down’s ubiquitous blind shots, scolded by many as the storied layout’s Achilles’ heel, that bring out the best in links golf.

The tee shot at the 404-yard, par-4 11th hole is played to a white rock perched atop a towering dune, too far right of the aiming point and it’s unplayable, too far left and the approach to the green is much more difficult.

These shots require equal doses of commitment and execution, and a reward unequaled by the target-oriented confines of parkland golf.

Both courses enjoy an embarrassment of visual and historical riches, but for our money we’d prefer an aiming rock and a tee time at Royal County Down.

Read the running blog of Jay and Rex's Irish adventures.