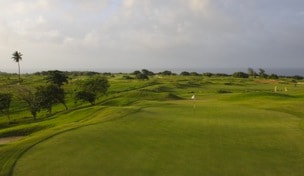 Getty Images
IRVING, TX - MAY 19: Jimmy Walker reacts to his tee shot on the on the ninth hole during Round One of the AT&T Byron Nelson on May 19, 2016 in Irving, Texas. (Photo by Tom Pennington/Getty Images)  -

DORADO, Puerto Rico – On the island less than 24 hours, I found myself back to where destination golf began in the Caribbean.

In many ways, the Dorado Beach Resort & Club symbolizes golf on the island. Its heyday of the 1960s and 1970s under Laurance S. Rockefeller burned bright into the 1980s before a downward spiral that lasted decades. A recent rebirth – spearheaded by the renovation of its famed East course in 2011 and the celebrated opening of Dorado Beach, a Ritz-Carlton Reserve, in late 2012 – has ushered in a new era of golf resort development on the island.

Although pockets of eyesores still plague main roads, the island’s new golf resorts sparkle. The five-star accommodations at the Ritz, the St. Regis Bahia Beach and Royal Isabela are all less than three years old.

Convenience used to be the island’s biggest attraction – there’s no passport needed, no money to exchange, no language barriers, direct flights galore from airport hubs along the East Coast and even driving a rental car is easier than every other Caribbean island. Now the destination sells itself.

"We want to be that shining star of the Caribbean again," said Ingrid I. Rivera Rocafort, the executive director of the Puerto Rico Tourism Company. "Exciting things are happening."

St. Regis Bahia Beach is one of many new luxury golf resorts in Puerto Rico.

The tropical winds of change continue to blow on Puerto Rico. These swanky new resorts have forced the old stalwarts to upgrade or fall behind, the cycle of life that almost derailed Dorado.

The Wyndham Grand Rio Mar Beach Resort & Spa, home to the Rio Mar Country Club Puerto Rico’s River and Ocean courses, is in the midst of a $500 million spending spree to upgrade resort infrastructure. The project will include $157 million for the renovation of 400 hotel rooms, the conversion of 200 rooms and 132 apartment units into timeshare units and the construction of 155 additional units. The property is ideally located on 500 acres between the El Yunque national forest and the beach.

The Bahia Beach Resort & Golf Club is tweaking two holes on its excellent Robert Trent Jones II redesign to make room for more beachfront development from the St. Regis. Royal Isabela is launching plans for a second golf course and a major beachfront hotel to complement its 20 intimate casitas. Brothers Stanley and Charlie Pasarell are building an environmentally conscious community that enhances the island’s natural beauty roughly an hour west of San Juan. Every casita features its own private plunge pool overlooking the ocean. The open air bar and restaurant share the same voluptuous view.

"These guys have a heck of a vision for this place,” said Hotel General Manager Robin Donenberg. “They have donated all the land along the cliff back to the people of Puerto Rico so no one can ever build on it."

El Conquistador Resort, home to a Waldorf Astoria and 18 holes of golf, also has this dazzling seaside setting.

Smaller improvement projects are ongoing to keep the El Conquistador Resort, A Waldorf Astoria Resort, looking fresh after its $120-million enhancement project finished in 2008. Of the four Puerto Rican golf resorts I’ve stayed at over the past decade, El Conquistador remains my favorite. The cliff-top vistas along the island’s northeast coast never cease to amaze.

Between the water park, private beach at Palomino Island, golf course, 23 bars and restaurants and the chance to kayak at night in the nearby bio bay, there’s never a dull moment.

Where to play in Puerto Rico

Back at Dorado, it came as no surprise to see Chi Chi Rodriguez driving up in a tricked-out yellow golf cart. He stopped to chat and take pictures, like he does for so many other tourists.

Rodriguez honed his game at Dorado in the 1960s and even won a Shell’s Wonderful World of Golf match against Doug Saunders in 1964, jump-starting his World Golf Hall of Fame career.

Dorado, a former Champions Tour host originally designed by Robert Trent Jones Sr., and the 36-hole Trump International Golf Club, home of the Puerto Rico Open since 2008, remain the most recognizable courses on the island. They aren’t the only good ones.

Alberto Rios, the director of golf at Bahia Beach, said golfers can easily stay at one place and explore many of the island’s 21 courses that are currently open. The West course at Dorado remains closed for renovation, and the Rodriguez-designed course at the Embassy Suites Dorado del Mar - Beach & Golf Resort was shuttered earlier this year, possibly for good.

"All (our courses) are different layouts, all with different designers,” Rios said. “You could have a week here and have a great time."

The most memorable experience of my trip came with golf and lunch at Bahia Beach, a country club experience managed by Troon Golf next door to Trump International. The news that the par-3 17th hole is moving inland isn’t great for golfers, but a secluded setting through the jungle and around lagoons for most of the round should keep its aura intact.

Royal Isabela, in particular, bends just about every design rule. Designed by David Pfaff (a former Pete Dye associate who passed away in 2013), blind shots galore and a pair of extra holes are incorporated into the routing. Hire a caddie to navigate this minefield of trouble. They will add to an exclusive experience, where no more than 24 players tee off per day.

Royal Isabela has given Puerto Rico what it sorely lacked: an extended run of oceanfront golf. Its heroic shots along the cliffs of the back nine culminates in a tee shot over a coastal chasm on the par-3 17th hole. This is the new Puerto Rico – bold and beautiful.

"People come for the view," Royal Isabela Superintendent Dean Vande Hei said. "There are very few places in the world that has this."