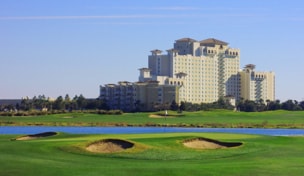 Getty Images
Dustin Johnson of the United States approaches the hole after putting out on the second hole during the third round of the World Golf Championships-Cadillac Championship at Trump National Doral Blue Monster Course on March 7, 2015 in Doral, Florida. (Photo by Mike Ehrmann/Getty Images)  -

ORLANDO, Fla. -- No doubt, there's lot of magic to be found in Orlando, Fla., but it isn't just limited to Mickey Mouse at Disney World or Harry Potter at Universal. For golfers, this is epecially true as I found out last week while in town for the PGA Merchandise Show.

Not only did I spend the week viewing the latest and greatest in golf products at the show, but I also checked out two resorts that are beyond Disney World and then some.

The Omni Orlando at ChampionsGate is a few exits south of Disney heading toward Tampa off of Interstate 4, but in a whole other world. Few kids and no mouse ears. Just plenty of rest, golf and relaxation for adults. The Mission Inn Resort & Club in Howey-in-the-Hills, Fla., is about 45 minutes north of town and caters to a more diverse audience, although it's mostly adults, too. Both are worthy golf destinations, both have 36 holes and great dining, but they couldn't be more different.

The Omni Orlando is just what you might expect from an Omni property: luxurious accommodations, fancy restaurants and two golf courses designed by a big-name guy, Greg Norman. It's also the home of the David Leadbetter Golf Academy as well as a lighted par-3 course right behind the hotel. Pretty much everything is first-class, including little touches like complimentary coffee delivered to the room first thing in the morning.

Meanwhile, northwest of Orlando in Howey in the Hills, the Spanish-style Mission Inn is old Florida. Family-owned for the last 50 years, you feel like you're a part of the family when you stay there, which is probably just one of the reasons the resort attracts so much repeat business. The resort, with comfortable and modest rooms, is spread out in a Florida grove setting. The original golf course, El Campeon, is nearly 100 years old. It's been the site of NCAA championships, state tournaments and local pro events for decades. It's one of the hilliest courses in Florida and far different from the resort's other course, the Gary Koch-designed Las Colinas Course, which is spread out through development in a more traditional Florida golf setting.

The two courses at ChampionsGate are very different, too, but that's where the similarities between resorts end. The International Course was inspired by links courses in Ireland and Scotland as well as features from one of the Shark's favorites, Royal Melbourne in Australia. It's hardly a links course, but the home of the annual Father-Son Challenge does have links design elements in it, including a wind-swept dunes look and firm, fast greens and fairways. The National Course, meanwhile, is traditional American golf, with risk-reward holes, interesting bunker/greens complexes and plenty of Florida features.

Although Norman is sometimes criticized for his designs (like the AT&T Oaks Course at the TPC San Antonio, which drew the ire of some pros, for example), I found both of these courses to be very enjoyable and good tests of golf. Best of all, even if you're not staying at the resort, you can still book a tee time, often for less than you might think (the same goes for Mission Inn). Perhaps one of the best parts of the golf experience at ChampionsGate is the after golf experience. With a sunken octagon bar, great outdoor deck and a couple dozen new flat screen TVs, Piper's Grill is one of the best 19th hole experiences in the Orlando area. The deck overlooks the golf courses, and the food, including breakfast, is top-notch. The facility also boasts an extensively stocked top 100 golf shop with some of the best logoed apparel I've seen anywhere.

Staying at the Omni makes the package complete. With more than 730 rooms, it's one of the largest Omni hotels in the world. There's also tennis, jogging, basketball, an 850-foot lazy river, a 10,000-square foot spa and the aforementioned par-3 course, perfect for a few clubs, flip-flops, a cocktail, and a cigar after dinner.

The dinner options are pretty good, too, including a terrific pan-Asian experience at Zen's, which serves up gourmet Chinese, sushi and seafood as well as Trevi's Italian food and a sports bar and grill.

Simply put, the Omni Orlando at ChampionsGate is an upscale golf experience, but not pretentious.

Mission Inn, which also has a spa and what seems like an endless menu of activities, might be considered a little more blue-collar, but the setting is no less spectacular. It's long been a favorite wedding destination and with its 30,000 square feet of meeting space, a suitable retreat for corporations as well.

But for the golfer, Mission Inn really does represent getting away from it all – free to experience unencumbered golf and enjoy a cigar and a Guinness afterwards.

This is a place where you're likely to make new friends on the golf course or later that night at the weekly prime rib and seafood buffet, where most people probably blow their weekly allotment of calorie intake with little thought of guilt. Like ChampionsGate, the grounds offer so much more than golf, including skeet and trap shooting, boating, fishing, hiking, basketball and tennis. In fact, the resort has both har-tru and hard-courts and the Casar Villarreal Tennis Academy, run by Villarreal, a former Bolivian Davis Cupper, who has been at the resort for 25 years. The historic town of Mount Dora is also nearby, where day-trippers can make a day of antique shopping and a strudel at a local German bakery.

Still, the star of Mission Inn for golfers is El Campeon, which dates back to 1917. Designed by Chicago's George O'Neil with later enhancements by Scottish architect C.E. Clarke, there is nothing like it in Florida. The most interesting hole might be the 17th, a par-5 that runs downhill, turns the corner and then plays over a bunker and Spanish-moss covered oak tree to a green protected by a large pond. How you play that hole, or the tough 16th, which has a green surrounded by a bunker and palm trees, is likely to be among topics of exaggerated conversation an hour later over a cold beverage.