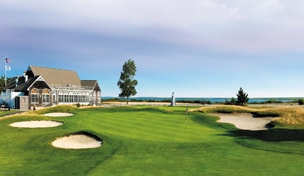 ATLANTIC CITY, N.J. – A golf trip to the Jersey Shore is no gamble.

It’s a sure jackpot.

For those who lose their golf shirt at one of the city’s 13 casinos, fear not. These unlucky golfers won't lose their wallet playing at some premier public courses surrounding the city.

Looking for links? McCullough’s Emerald Golf Links and Twisted Dune Golf Club offer two unique links-themed options in Egg Harbor Township. How about country club cool? The historic Atlantic City Country Club in Northfield is as good as it gets.

Want to play where the pros have played? The 6,247-yard Bay course at the Stockton Seaview Hotel & Golf Club might be short by modern standards, but it does have a long history of hosting the LPGA Tour, and let’s not forget Sam Snead’s first major championship, the 1942 PGA Championship held there.

Jersey often gets a bad rap – and there are some rough edges surrounding the famed board walk along the beach – but when it comes to buddies golf, Atlantic City soars with restaurants, gaming, nightlife, beaches and golf galore. Within a 40-minute drive are 19 golf courses, most of which are 15-20 minutes from downtown.

'We are a hidden gem,' said McCullough’s General Manager Thomas Sullivan, the current president of the Greater Atlantic City Golf Association. 'We just haven’t marketed it properly. We have 140 restaurants. We have world-class accommodations.'

Such bragging by golf course architect Stephen Kay, who designed McCullough’s and Blue Heron Pines, might sound self-serving if it wasn’t so true.

'When you go to an area, the courses tend to be very similar. Not here.'

Over 100 bunkers litter the links-style layout at Twisted Dune.

I played six area courses over five days in September and still missed out on some good ones, notably Ballamor Golf Club (ranked ninth in the state by Golfweek and has a 4.5/5.0 rating on GolfNow).

Consider the stunning contrast between the classic architecture of the Atlantic City C.C. (founded in 1897 and restored by Tom Doak in 1999) juxtaposed against Twisted Dune’s modern manmade mounds. Twisted Dune architect Archie Struthers moved 2 million cubic yards of dirt on the 7,248-yard course, which opened in 2001. Visually, it’s a knockout.

In Photos: View the golf courses of Atlantic City

The Atlantic City C.C., the consensus No. 1 course in the state, charms visitors in more subtle ways. The clubhouse might as well be a museum of golf with all its memorabilia and old photos. Arnold Palmer, Snead and Bob Hope all have deep connections to the club, host to six U.S.G.A. championships and the first-ever Senior PGA Tour event (now called the Champions Tour) in 1980. The term 'birdie' was coined on its 12th green in 1903.

Three of the five par-3s on this 6,577-yard par-70 showcase the Atlantic City skyline across Reeds Bay. Two of its best par-4s, no. 14 and no. 16, slither through the scenic tidal marshes along the shore.

These same marshy views are the major draw of the par-71 Bay course at Seaview, a fine 36-hole resort dating to 1914. Seaview markets the Bay as a Donald Ross design, but that’s only partially true. Ross added the sand traps roughly one year after Hugh Wilson (of Merion Golf Club fame) completed the routing in 1914. Bob Cupp Jr’s restoration in 1998 was well-received, but the tinkering continues. Four new tees and several bunkers are being added this fall in anticipation of the 2014 ShopRite LPGA Classic. The course will be closed until a reawakening next spring.

Although the Borgata Casino Hotel & Spa, where I stayed was excellent, a part of me wanted to stay along the boardwalk at one of its casinos like the Tropicana Casino Resort. You can’t go wrong either way. Both the Borgata and Tropicana would fit right in on the Strip in Las Vegas. They’re sprawling entertainment hubs stocked with bars, concert halls and restaurants.

Choosing where to eat will be even more difficult than selecting which courses to play. The best golf-and-grub combination comes at McCullough’s, a quirky replica course reclaimed from an old landfill. The Library III, a local institution renowned for steak and crab cakes, recently relocated within the clubhouse. Smart golfers book an afternoon tee time, followed by dinner.

If the budget allows for one night to splurge, dine at the Old Homestead Steakhouse inside the Borgata. It’s over-the-top fantastic, much like the rest of the property. The Oyster Creek Inn & Boat Bar in Leeds Point serves up a scenic setting on Great Bay. All the fresh seafood was fairly affordable for the quality.

For big golf groups, feast on heaping family-style portions of chicken parmesan at Carmine’s inside the Tropicana. Like the golf, this meal will leave everybody satisfied.