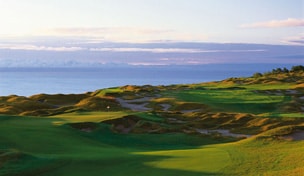 Getty Images
Because of his Masters and U.S. Open victories, Spieth seemed a shoo-in for Player of the Year. But Jason Day muddied the picture with four late-season wins, including the PGA Championship for his first major. Spieth ended all discussion, however, when he won both the Tour Championship and the FedEx Cup Playoffs.  -

As natural selection of American golf courses, architects and owners continues to identify the thrivers and survivors, one man continues to strap on his boots every day and goes to work. Having recently caught up with one of the most influential minds in the modern era of golf and architecture, I simply asked Pete Dye, 88, “What have you been up to lately?”

“I have a few projects I’m working on,” he said, as he took a break from a meeting at his home in Florida. His wife, Alice, had answered and passed the phone: “It’s the guy from the Golf Channel,” she said. And then she barked: “You can take the call, but not in here, go to your office.”

Pete Dye’s busy, but he’s not in charge. Not at home. Although in Sheboygan, Wisc., Herb Kohler has asked Dye to assess a piece of property that would be used for the fifth course at the American Club, of which the first four are all Dye designs.

“In my mind, he’s clearly the strongest living architect,” is what Kohler once told me about Dye. And according to Dye, Kohler might be close to “pulling the trigger” on what appears to be a response to Mike Keiser, owner of Bandon Dunes, moving in on Kohler’s turf.

Kohler already has Whistling Straits and Blackwolf Run, both of which have hosted major championships. And after looking all over the world for more property to develop into courses and resorts, including the southwest coast of Oregon - down the street from Keiser’s Bandon Dunes - Kohler’s now looking into developing his own backyard. “Herb’s been sitting on this property for years,” said Dye. “There would be four holes along Lake Michigan. I wish I could have more along the water. That’s always the case. I wish I could have six.”

And the retail golfer wishes it could be 16, but some is better than none.

Dye has built 81 courses in his decorated career, which includes the Ocean Course at Kiawah Island, TPC Sawgrass and Harbour Town. “I’m too dumb,” he said. “I’ve actually gone out and built them all myself.” Which is exactly what Kohler appreciates about Dye. That he gets the man he hires, on property, shaping and making the decisions that go into building a golf course.

No one from Kohler’s camp returned multiple attempts for comment, but Keiser welcomed the idea of Kohler adding a fifth course to the American Club. “I’d be a fan,” said Keiser, who told me he plans on building three courses in the next eight years at the Wisconsin development he’s calling Sand Valley, located near Wisconsin Rapids, two and a half hours from Kohler. The first of Keiser’s courses will be built by Bill Coore and Ben Crenshaw. Preview play could be as soon as the summer of 2016.

“I’ve always loved golf in Michigan,” said Keiser. “But if it was close as to which state has better golf, it sounds like the nod is about to go to Wisconsin.”

Meanwhile, Andy Ziegler, owner of Erin Hills, which will host the U.S. Open in 2017, will undoubtedly draft off the buzz of more golf in the area. Erin Hills is an hour from Kohler and a little more than two hours from Wisconsin Rapids.

“If you love golf, who wouldn’t want it?" said Ziegler. "Both have proven they know what they’re doing. It would be good for Erin Hills, but it would be great for golf in general.”

Asked if he would be inspired to add a second course, Ziegler said no. “We have land that resembles what we used for Erin Hills, but business is working well the way it is.” He said they’re considering adding holes, but he likes the idea of a short course or a par 3 course. “I like what they have at Pine Valley and Augusta National,” said Ziegler, who will add a fourth four-bedroom cottage at Erin Hills this summer.

As the Midwest endures one of the worst winters in over a century, the Wisconsin turf beneath the snow is becoming increasingly attractive to avid amateurs all over the world. And who in the industry wouldn’t want to see the partnership of Kohler and Dye ride again. Except for maybe Alice.

“Every time I do something, she tells me I’ve done it wrong,” said Dye.

For a guy who told me he’s “too dumb,” Dye’s pretty smart.