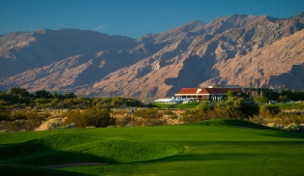 Just a two-hour drive from Hollywood, Palm Springs is a desert destination known for star-spotting. But even if you don't have a Bob Hope or Bill Clinton-type bank roll, you can still play peak season golf around the Coachella Valley.

The valley is made up of a succession of communities anchored by the largest, Palm Springs. All together, they have more golf courses than most major metro areas. That means if you're not picky about which course you play or what time, you can name your price.

Tee Times in Palm Springs between January and April is the area's peak season, as over-seeded courses are in magnificent shape. But in the winter, if a cold spell passes through, there isn't much luxury in a sunrise tee time when you're bundled up under five layers. Instead, wait for tee times between noon and 1 p.m. and the chances are the same golf course will be warmer and a little more affordable, even if there are a few spike marks on the green.

Coachella's top shelf starts with the infamous Stadium Course at PGA West, which I got a good look at last September during the Golf Channel Am Tour Senior National Championships. Three of my favorite courses in the area that I've played personally, Classic Club and the two courses at Indian Wells Golf Resort, run between $129-165. Considering Scottsdale's best courses run over $200, the best courses in Palm Springs offer a little value.

But beyond the valley's biggest names, a remarkable amount of golf that can be played during the peak season for less than $80. Desert Dunes, designed by Robert Trent Jones Jr. is a hosted the Canadian Tour in 2010 and is one of the more unique area designs, offering links-style influences on its desert terrain. While morning tee times can run as high as $99, GolfNow offers some specials for as little as $59-75 in the morning. So keep your eyes peeled.

Also, the JW Marriott Desert Springs Resort features two courses, the Valley and Palms course, both upheld to luxury resort standards with conditions and beautification. While morning rack rates are $89, you could get lucky with an afternoon time as low as $66.

A bargain pick with championship-caliber golf is Escena Golf Club. This Nicklaus Design course boasts no shortage of challenge at nearly 7,200 yards from the championship tees for sharp-shooters. Morning tee times can be found as low as $57, though usually closer to $85.

If you want Pete Dye challenge but can't afford PGA West, keep an eye on tee times at Westin Mission Hills, which has a par-70, 6,700-yard design by Dye. Afternoon tee times can be found for $75. Or, play the longer but more player-friendly Gary Player course.

A deeper search for bargain peak morning tee times in January reveals plenty of lesser-known courses that can be had even under $50: Cathedral Canyon and Woodhaven Country Club are both traditional, full-length golf courses, while you can get in a three-hour round at the short Cimmaron Resort's Pebble Course.

If these courses don't cut it, wait until June, and Coachella will be dripping with deals.