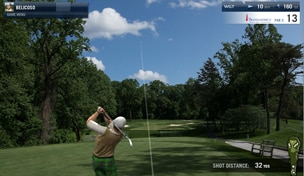 Opening-round play is underway at the second event of the 2014 WGT Virtual Tour season, the Transamerica Classic. Thus far, the leaderboard might be mistaken for standings from the Olympics in Sochi, as the top spots have a distinctly international feel.

The current leader of the Tour Legend tier is American Agentbrown123, who completed the first round of stroke play at Congressional Country Club with an impressive total of 53. Dansamcam, who won last month's IOA Open at Pebble Beach, headlines a large group tied for second at 54, a collection of players that includes Germany's FairwayRuepel68 and poldimaier, Canada's GEHL13 and CptWomp, and fmagnets from the United Kingdom. Former Virtual U.S. Open champ BolloxinBruges is also tied for second, as is Sweden's ujjbnjk.

The Legend tier is currently paced by a quartet of players at 54: dougsda (USA), hatchy66 (U.K.), DrShelby (Australia) and ReKanaya (Argentina). American shagadelic leads the Tour Masters division with a 54, while sub50's 56 was good enough to take the lead in the Master tier.

Players can still register for this month's event, but the window for play in Round 1 is quickly drawing to a close. Tournament participants can make an unlimited number of attempts until Feb. 21 to card their best Round 1 score, while they will have only one chance to post a total in Round 2 by Feb. 28. Winners will then be chosen in each tier based on each player's two-round total score.

Highlights from Round 1 include a pair of aces: Tour Legend player JFHuber made a hole-in-one at No. 2, while Master player BELICOSO aced the par-3 13th.

WGT scoring and leaderboards are available on Golf Channel, and you can click here to get started and head to the first tee box at Congressional.